In a stunning turn of events, the World Wide Leader in sports has decided to devote precious air time showing the famous party animal playing the sport he was originally known for.

THIS JUST IN-- mere hours after we were all able to see him in Austin at a college party via the Internet, ESPNU will offer us a glimpse into the now-buried athletic past of Johnny Football.

The Heisman was won months ago. Since then, Manziel has enthralled us with his other talents: celebrity elbow-rubbing, Twitter outrage, photographic chicanery, and now...going to parties. ESPN's bold move to display his athletic prowess at this exact time is both stunning and a tribute to why they are considered the finest sports network on the planet.

So kudos once again to ESPN. Their steadfast dedication to covering actual sports instead of getting caught up in the varying narratives that surround athletes is quite admirable. Special thanks to Skip Bayless, Colin Cowherd, Mark May, and the countless other sports purists at the network who no doubt helped make this possible. 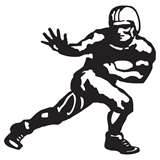 Join us at the Alabama Tailgate for live commenting during the game.