We held an impromptu contest to find the best artists among our Twitter and Facebook followers. Here are the results of an intense competition.

First, thank you to all of the artists and non-artists who participated in this important competition. We asked you to draw an Aggie player or coach for a chance to win a prize. After looking through the entries and carefully considering the lack of criteria, I decided to send prizes to both the first and second place artists! If you are one of them, e-mail your name, address, and t-shirt size to goodbullhunting@sbnation.com. If you did not enter or win, please enjoy the following submissions ranked from best to most terrible.

This is a true Sharpie masterpiece of Coach Sumlin. The only improvements would be a visor on his dome and a swaggercopter in the background. A pant bulge is an arguable enhancement. This sketch looks like a real caricature that Coach Sumlin would pay money for at Walt Disney World. But his wife would be pissed that he got a solo caricature because who does that? 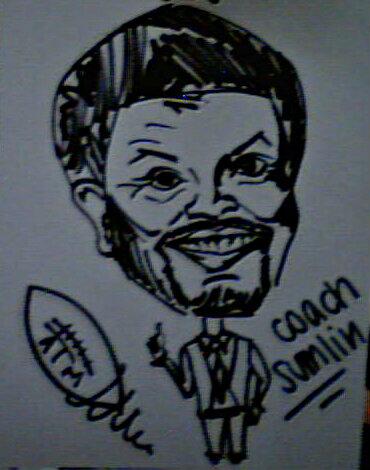 This #OVO hybrid of Johnny Football and an owl is inspiring. I can't think of a better way to commemorate Johnny's OU victory celebration than giving him wings and making his feet into a surfboard. As a fan of Highlights Magazine, I'm enjoying the added touch of a "Hidden Picture" game where the artist embedded a football into Johnny's forearm. I won't comment on the skin detail. 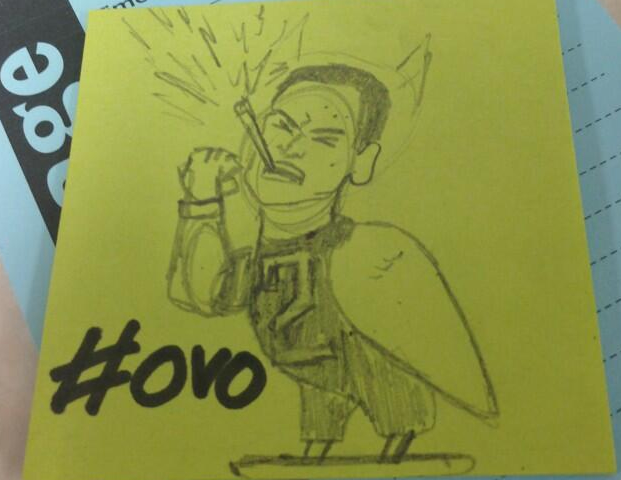 As a GBH contributor, rcb was not eligible to enter this competition but he forced his way in anyway. He also ignored the directions and drew Mark May who is not an Aggie coach or player. Topless Coach Sumlin riding an elephant is pretty badass but the SEC Logo is not even beveled. Come on, dude. 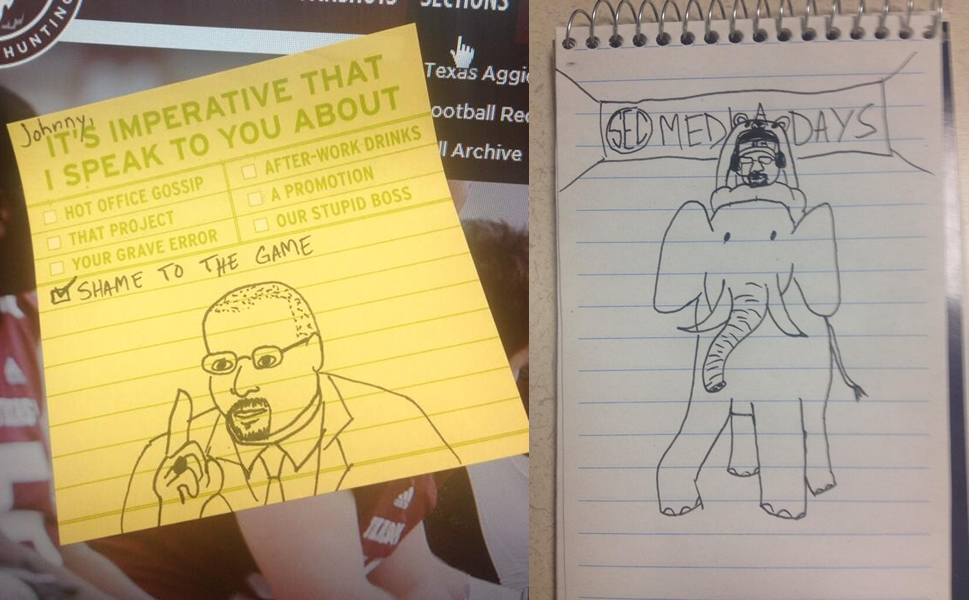 Pity is a prime reason this is ranked #4. I couldn't decided whether this should be portrait or landscape, so here you go. The artist sweated profusely all over the paper and it looks like there's a baby's handprint where Johnny's lower body should be. That'll do, Reveille Pig. That'll do. 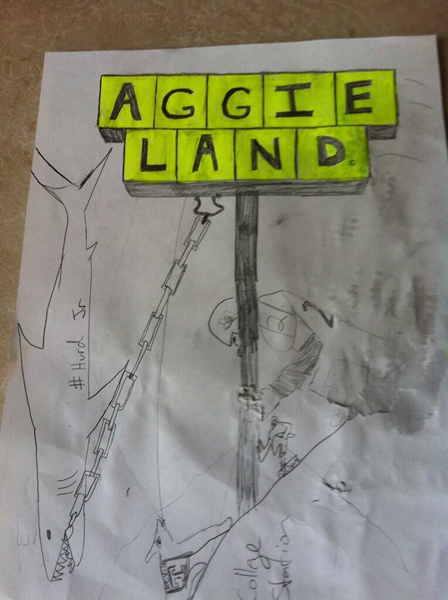 Original on left: The Scooby Doo head looks brilliant and possibly traced. The Superman logo on the collar is a really excellent touch. I can't believe this only finished in 5th place. Send me your address and I'll mail you a car sticker or something. Wait, the arms are horrifying and obKnoxious, particularly the right arm. If you look carefully, there appears to be stitching where the partial arm is connected to the mandog body. Actually, forget the car sticker.

Revised on right: This is a much, much better and less nightmare-inducing effort. I am really upset that I was finished writing this post and then had to add this revision. Is he making an Italian hand gesture here?

This was pretty good coming from a Yell Leader but I was looking for something more fun and less realistic with this contest. If the football was really tiny relative to the body, this would have been a stronger piece. Actually J-Train is looking slender these days, so I docked points. Also, I feel like the artist is too close to the blog to win anything without controversy. 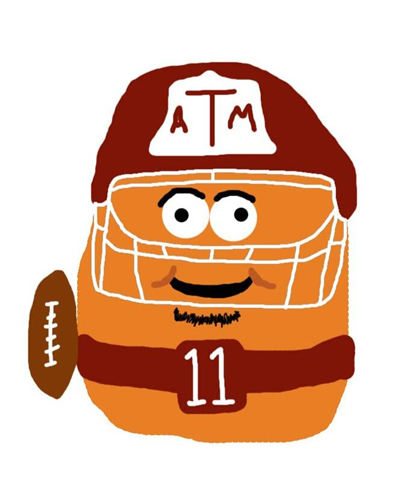 The concealing facemask made me think you are terrible at drawing faces. Also, the body shape makes me uncomfortable. It's like the guy only works out his obliques and doesn't bother with arms at all. 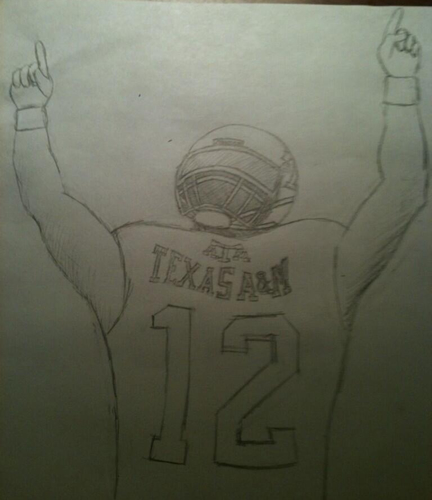 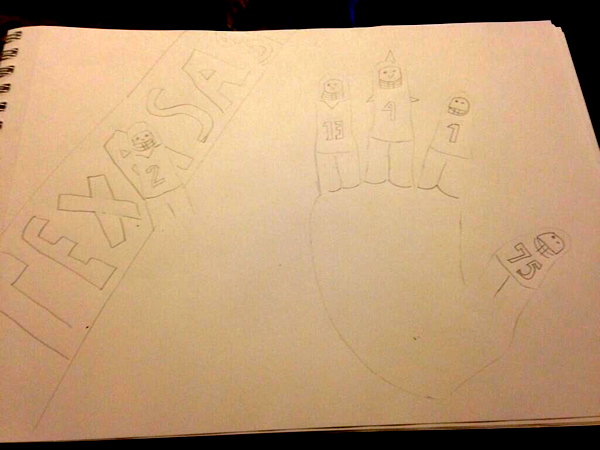 This entry lost points for disturbing realism which shows our placekicker missing a FG by approximately 4 miles. Also, is that a leg on the ground or... 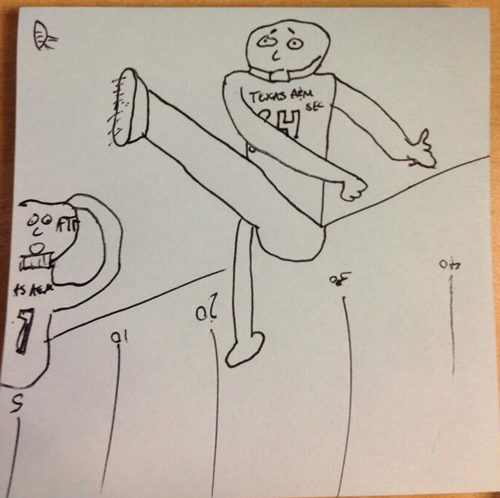 This is a very unsettling piece of art. At the same time, I feel like this might be actual art so I want to recognize that with a top 10 finish. Why the clown lips, lady? This is the most memorable entry in the sense that I will be waking up in a cold sweat at 3am thinking about it. 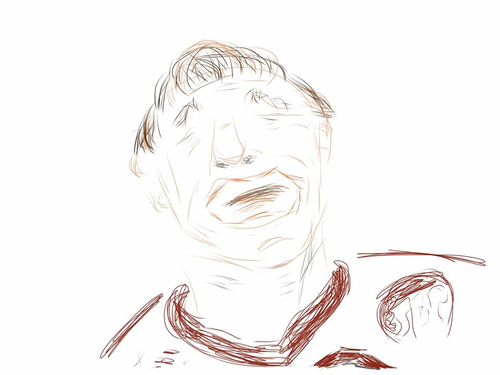 I almost awarded this First Place because the logo has a lot of followers and may have tweeted something nice about us. Honor Code, you win again. This scene supposedly takes place right before Johnny sent his infamous tweet. Sorry, one of his infamous tweets. A mountain of beer cans would have improved this work. 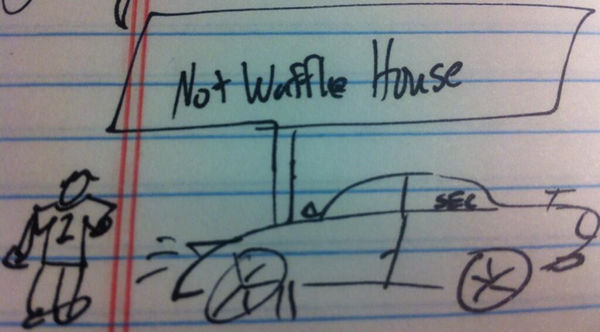 Thank you for submitting your child's drawing to the contest. I am sorry they didn't win this time, but I appreciate that Johnny's feet are to-scale and it would be neat to have one hand made out of a football. And hey, you're the 12th Man! 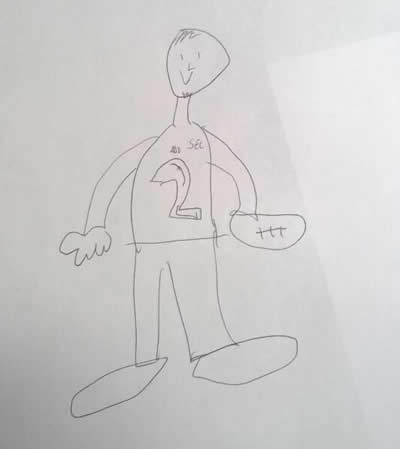 This is a drawing of an angry Johnny, presumably. The artwork isn't really that bad, but it feels like this is the only face you can draw then you just add thought and speech bubbles to show who it is. If you're going to use profanity, go for the gusto and don't mask it. 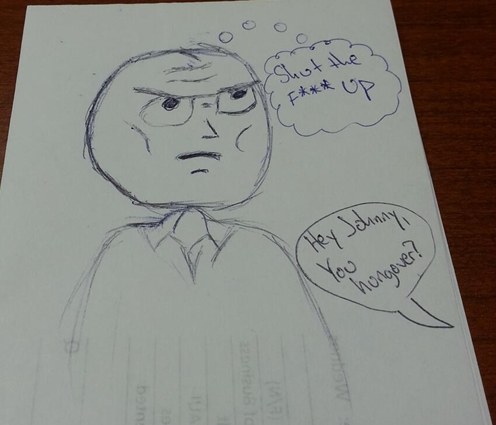 Ty Branyon jokes. You know how I know you're old? 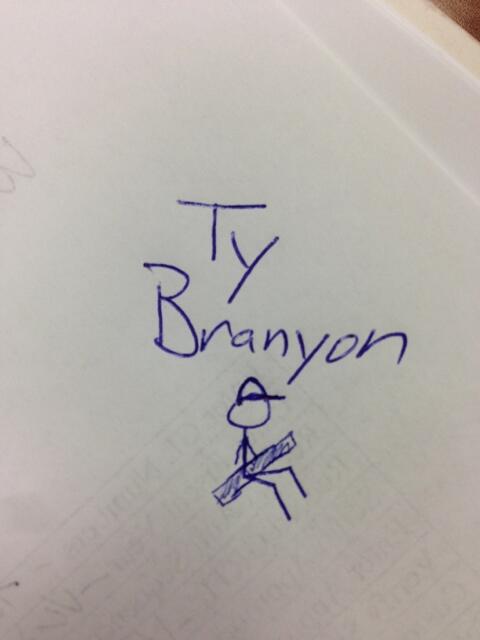 These may not be the worst entries (hint: they probably are), but I know you really wanted to win and I feel like it's more noteworthy to finish last than somewhere in the middle. "Trey in a blue shirt" really troubled me and so did the deranged look on Johnny's face. Please do not contact me to ask if there is a prize for last place. There is only shame. 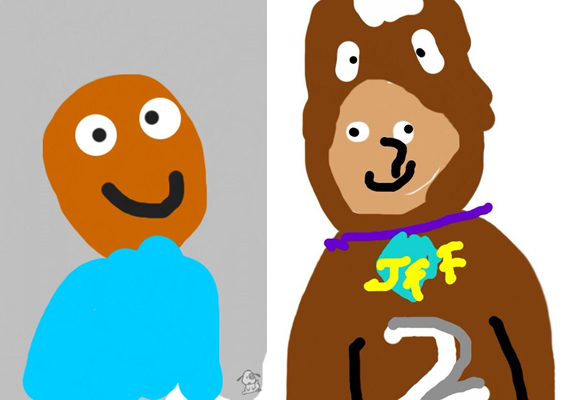