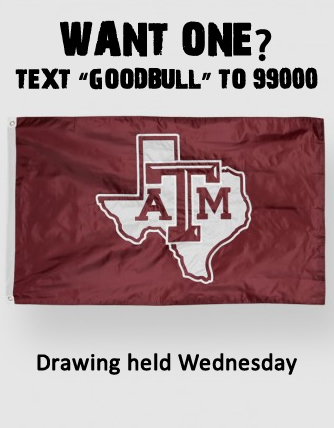 Show your state of Texas and Texas Aggie pride to your neighbors with this new flag and fly it high at your tailgates this Fall.

Win a TEXAS A&M FLAG with the state of Texas outline. Just text GOODBULL (all uppercase, one word) to 99000 to enter to win! Only one entry per phone number will be counted.Just for entering, you'll receive an online coupon code good for 12% off any online order for the rest of the month of July!

On Von. Still no update on the reason for his suspension, although there are plenty of rumors going around. Not sure why he would be suspended now for an undisclosed violation if he wasn't suspended then, but I suppose the NFL is gonna NFL as they like to do. The appeal is still in process, and Von insists he's in the clear.

Check it out. You know it's gonna be good when the advertisement is so so simply spellbinding.

ORLY? Our friends at the Mississippi State blog have ranked the best offensive backfields in the SEC, and...well. I personally think we were sold a bit short. I can see giving the nod to Georgia, but after that I'm not sure about those. Forget the transfers for now; Malena and Trey alone are worthy of a higher ranking.