(College Station) -- What's with all the Hey and Hullabaloo!? It looks like "Football John" is up to more shenanigans on social media this week. This is one Heisman Trophy winner who doesn't mind coppin' a breeze from practice to rub elbows with the bigwigs. Whether he's rattling the cage of fellow Aggies on Easter Break or cutting up with The King of Rock 'n' Roll, Mr. Crow has been having quite a bash this off-season. What's next... backseat bingo with Marilyn Monroe? That's a long way from a backfield belly-dive in Nowheresville, Texas. How will this radioactive off-season affect Crow's play on the gridiron at round up time for the Chicago Cardinals? No one knows yet, but all of this press is bad news for Mr. Heisman. Is this guy real hep or just a real big goof? You decide. 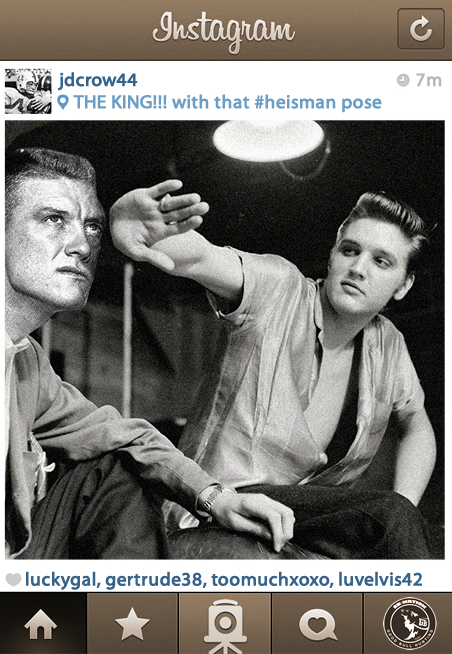 Well. It looks like Mr. Crow was hobnobbing with the showbiz elite again. What a treat to make the scene with Rock 'n' Roll's biggest star. The pair were apparently clowning around with stiffarms, and probably stiff drinks too, while the rest of us Regular Joes had to read about it in the morning edition. I wonder if John David cares how many blue-suede shoes he steps on with such tomfoolery.

Which Dolly is John D. trying to impress with this apple butter tweet? Most gals love his flat-top, but can he afford diamonds on that NFL rookie salary!? Someone needs to tell this cat to cool it before people start asking questions... even if this is a fake out. 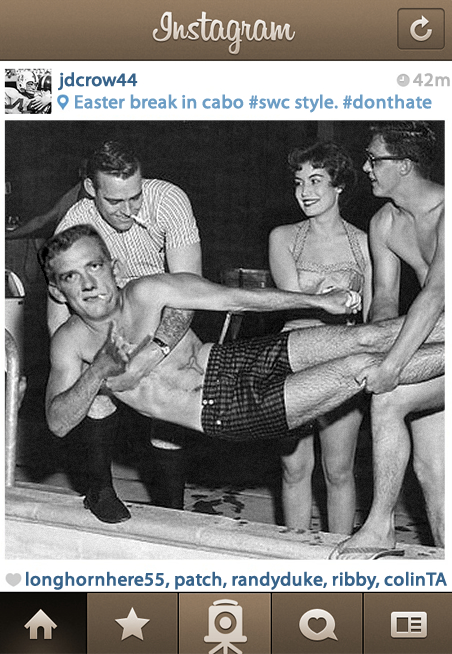 The AMC faithful were none too happy with this Easter Break photo. He may have been on a tropical beach, but John was clearly not marooned, ya dig? Something tells me his sunny disposition didn't last long once he got back to College Station. That "hook 'em" hand signal and Longhorn tattoo might have earned him double-duty PT from Coach Bryant if he wasn't already in Tuscaloosa. Crow later claimed the tattoo was a lick-and-peel prank, but no one is laughing now. 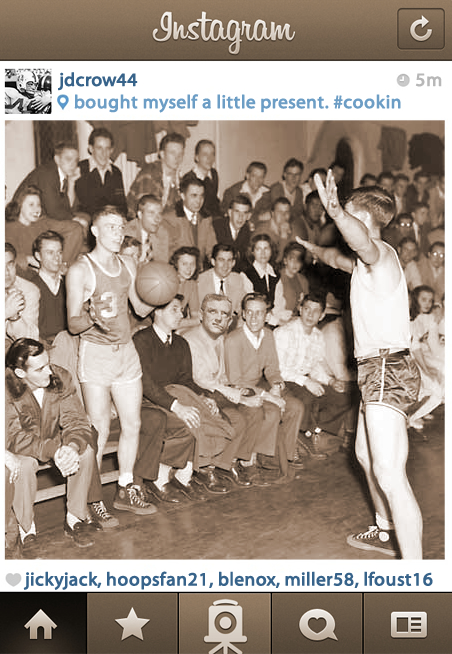 Uh-oh. JD Heisman ended up with courtside seats to watch some hoop action. Not sure where he got the bread for these tickets, but they must've cost around three bucks all told. Why, that's enough for a university student to dine on all week, and I'm not talkin' baloney sandwiches! I'm not saying there were boosters involved, but it sure makes ya wonder if he got an advance on that NFL salary. Crow explained the ticket as a present to himself, but his birthday isn't until July. Nice try, J. 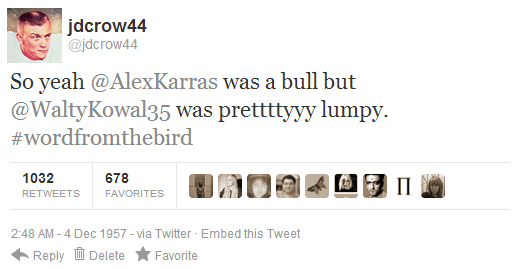 John was crusin' for a bruisin' with a late night jab at Michigan State fullback Walt Kowalczyk. This was tweeted mere hours after finishing well ahead of both Kowalczyk and Alex Karras in the Heisman Trophy voting. Someone needs to remind Crow that the "Sprinting Blacksmith" had more touchdowns and a higher average yards per carry last season.

John D. was positively frosted amid rumors that he took courses at AMC via mail correspondence. When asked recently what his favorite class was, he answered simply "sports." It's time to get on the horn with the dean and find out what's really going on over there in College Station. 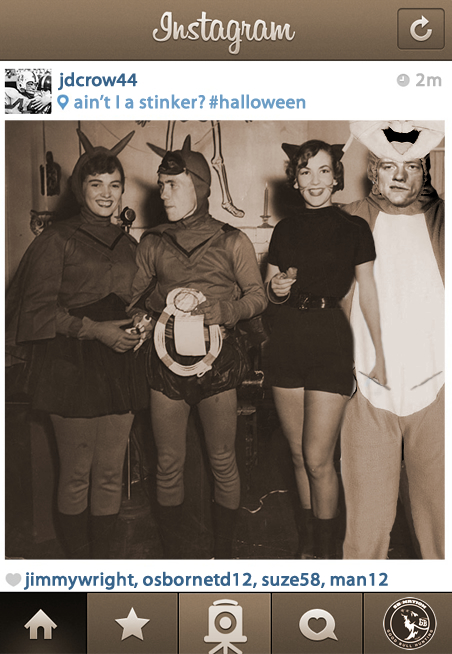 Look who was underneath a Bugs Bunny costume at last autumn's Halloween shindig. "Ain't I a stinker" he says? I dunno, but the gal with him didn't seem to mind. I hope there were no examinations in the morning, 'cause this bunny doesn't look like he was gonna bug off from the party anytime soon. That same night, a gallon of orange paint was smeared on the east corner of The Cushing Library, but John-Boy was never formally questioned.

So what do you say, Ags? You gonna sit by idly and stand for such skulduggery, even from a Heisman winner? Thank Heavens this distraction is heading out the door and will be pro foot-ball's problem. The last thing new head coach Jim Myers needs is a fella with a "me-first" attitude causing distractions off the field.