Examining the Role of Running Backs in the Aggie Offense

This year's stable of running backs will be loaded for Texas A&M. Ben Malena, Trey Williams, Brandon Williams, Tra Carson and possibly even incoming freshman James White will demand touches. How well did the offense distribute the ball to these game changers last season? Not very well. Let's take a look at the numbers.

Share All sharing options for: Examining the Role of Running Backs in the Aggie Offense

If you are like me, you can't wait until the offseason finally comes to an end. We can stop talking about which side of the Johnny drama we are on, and we can stop worrying about collecting points for the annual Fulmer Cup. I seriously miss the days of arguing about uniforms and pom squads on the sidelines (I'm pro-new uni's and pro-pom squad by the way). It's around this time of year I begin to really get the football itch. I wake up on Saturday morning and I hear it getting closer and closer. We have to bear just a few more weekends of baseball, and it's only about a month until Fall Camp opens.

To me, one of the most interesting storylines heading into the 2013 football season will be how we use our stable of talented running backs and how many touches they will get per game. I'll argue that our group is one of the most talented in the country. Ben Malena and Trey Williams return, and you add the electric Brandon Williams and a down-hill runner in Tra Carson. Plus, if you read these summer reports that get published from various subscriber websites, some feel even freshman James White could contend for carries. That's 5 quality running backs at our disposal. Add in the fact that our wide receiving corps is depleted with the departures of Ryan Swope, EZ, Kenric McNeal and Thomas Johnson and you can make a compelling case that running backs will deserve a significant increase in touches this coming year. After all, they will be the most talented skill position players (besides Mike Evans) to hit the field when the season begins. Why not utilize them?

Exactly how much did we use our running backs last year? I went back and looked at 1) touches per game (carries and receptions combined) and 2) total yards for the group vs the offense's total yards. Here is the result:

The breakdown was pretty surprising to me at first. As a group (Malena, Williams, Michael, and Dolezal), the running backs totaled 1671 rushing yards last season on 308 carries. They also had 38 receptions for 330 yards. That adds up to right at 2000 yards total offense on the season. (The number would actually jump higher to 2500+ yards if you added in Trey Williams' kick-off return yards for total yardage on the season). For any normal offense, that's a pretty good number. That's a whole season worth of offensive yards if you play in the Big 10. But it's minuscule for a Kevin Sumlin offense. Looking by percentage, the running backs only received 34% of the total offensive "touches" and accounted for only 28% of the offense's total yards. 28%! 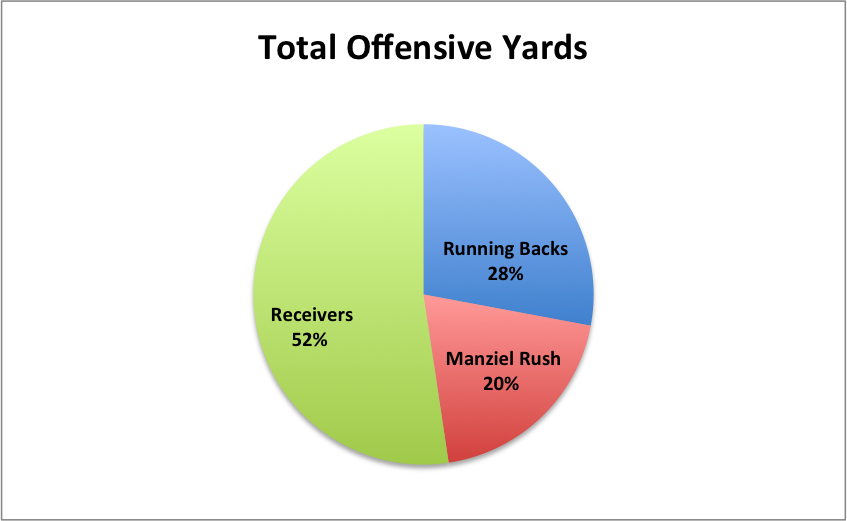 Why such a small percentage? Heisman trophy winner Johnny Manziel is the answer. You almost forget Manziel had 1400+ rushing yards last season. An incredible number. Manziel's rushing yardage accounted for 20% of our offense's total yards from last season. That will skew your team's stats.

Now, some people will want to pair up Manziel's rush yardage with the running backs and say we ran the ball for around 47% of our total yards last season. I've seen that argument recently. Not bad for an "air raid" offense. But that argument doesn't really hold any weight because we all know most of Manziel's scrambles were improvised off of pass plays. If you were to take the time and chart out every single play call from last season (don't look at me), I am willing to bet the play calls were close to 65% pass, 35% rush.

Is that a common trend for a Kevin Sumlin offense? I know we've discussed before how often he used running backs while at Houston. So, I went back to the 2011 and 2010 seasons at U of H and compared them to last season. 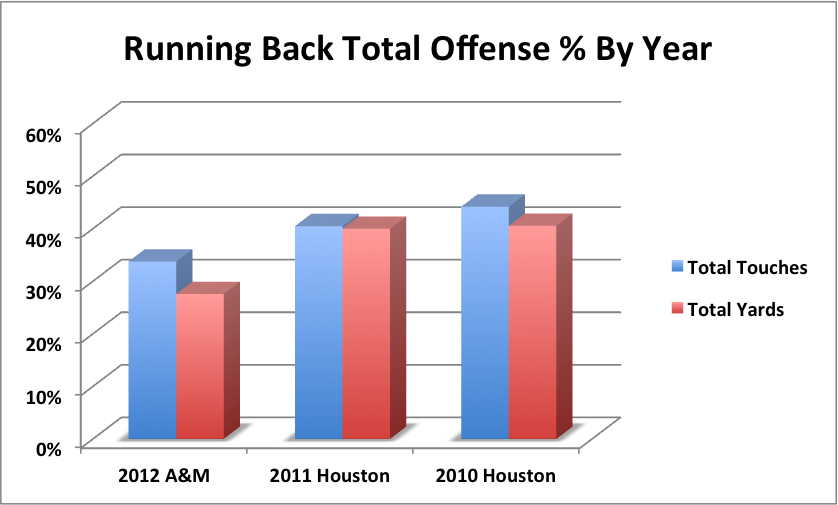 As you can see, the average usage of running backs is right around 40% both in terms of touches and total yardages. Last season was an anomaly thanks to Johnny.

The next question I had was what was the breakdown by game? Is there a trend between running back usage by game and wins/loss record? (Or in our case last year, close games/blowout games.) 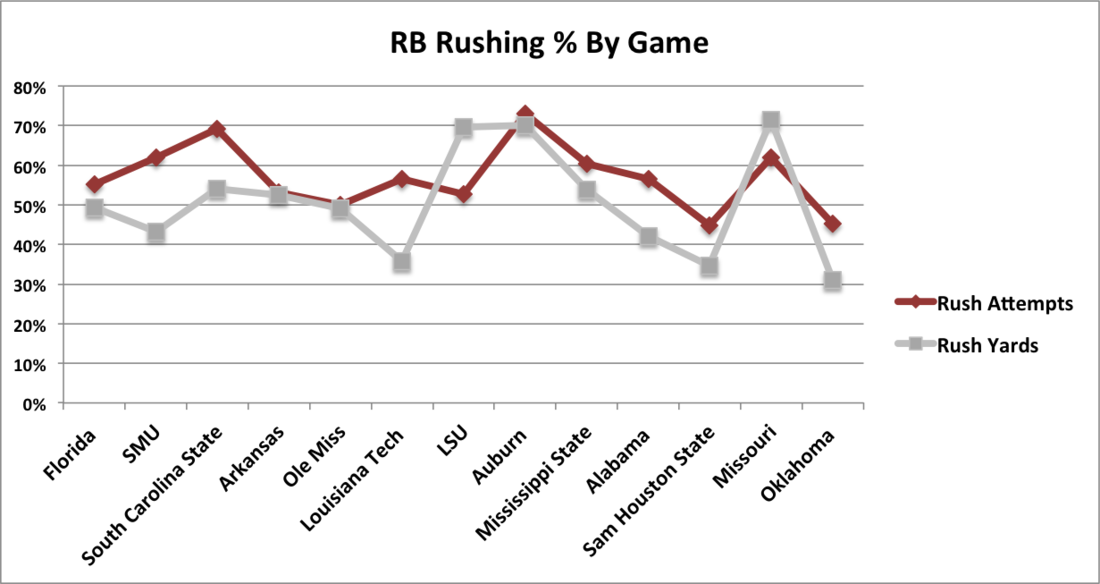 The quick answer is no, there really is no trend. We "used" running backs around 38% of the time against Florida, higher than our season average. LSU was closer to 30% and drew the criticism of a few folks including me. The following game at Auburn was the peak of running back usage for the season at close to 50% of touches and total offensive yards. It was also arguably our biggest blowout of the year and best offensive performance. Oklahoma (where Coach McKinney served as OC) was actually one of the lowest of the season with only 19% total yards and 22% total touches. Sam Houston State, our worst offensive game of the season, saw similar production from the running back group.

If you wanted to try and infer any type of trend, you might say we let Johnny carry the offense after the Arkansas game (his breakout game) until we lost to LSU. Then we went right back to involving the running backs which steadily declined until Alabama, where we relied on Johnny to upset the #1 ranked team in the country. It honestly makes sense when you think about it.

We saw firsthand how flawless this offense could be against Auburn when the rush/pass ratio was almost split 50/50.

Is the offense more effective with increased running back usage? My argument is yes, even though the data I presented here doesn't show the clear trend I was expecting. I am used to this feeling working in a science career, but I'm going to entertain the idea that we should utilize our running backs more even if it's not totally supported by statistics. We saw firsthand how flawless this offense could be against Auburn when the rush/pass ratio was almost split 50/50. With the group we have next season, I'd personally like to see it close to a 43-45%/57-55% split. I think that is fair, especially until the young receivers develop into a consistent group. This offense can be creative in how we get the running back the ball – it doesn't have to be just on straight handoffs. I wouldn't be against lining up some of our guys like Brandon or Trey Williams in the slot and trying to get them the ball in space, letting them work after the catch. Plus the running backs coach is our offensive coordinator. He's gotta show his guys some love, right?

If you want more information on the "air raid" offense and concepts, I suggest these websites. They do a lot better job explaining the philosophies than I ever could.

Some other interesting notes from my research you may like: