This Week's Hypothetical...What if Peyton Manning had been an Aggie?

We continue our look into the bizarro world of College Football with our weekly hypotheticals. This week we see how Peyton Manning joining the Texas Aggies would have altered history.

Share All sharing options for: This Week's Hypothetical...What if Peyton Manning had been an Aggie?

Peyton Manning’s name has been in the news recently regarding Texas A&M QB Johnny Manziel's early exit from Manning Camp. Texas A&M and Peyton Manning, two seemingly disparate names, being frequently mentioned together reminded me of an interview with Peyton that discussed his recruitment to Texas A&M. He even made a visit to College Station. As you probably know, Manning ultimately chose Tennessee. But what if…

Before we get there, let’s reflect back on just some of the names mentioned in this article. RC Slocum had a pretty decent eye for offensive coaching talent. Relevant names here include Bob Toledo (coach at UCLA/Tulane, current OC at San Diego State) and Mike Sherman among others. Not to mention guys like Steve Kragthorpe (former Louisville HC, current QB coach at LSU), Steve Ensminger (current TE coach at LSU), and Kevin Sumlin. I was going to include Dino Babers (current HC at Eastern Illinois) on this list, but I’ll give RC a mulligan on that one.

Anyway, back to the point. Peyton was recruited by Texas A&M, and ultimately signed with Phil Fulmer and the University of Tennessee. That year, the Vols also signed a QB out of Stephenville High School by the name of Branndon Stewart. Stewart, the Texas high school player of the year, was coached by Art Briles, and was a highly sought after recruit.

According to Stewart’s Wikipedia page, he played in 11 of 12 games for the Vols as a true freshman, before Peyton took over the starting job full time. There are also rumors that Peyton used to make every effort to get to the film room first and would immediately lock the doors, keeping Branndon from his preparations. After Branndon’s true freshman season, he elected to transfer to Texas A&M in 1995. He sat out the 1995 season, and was a three year on and off again starter, finishing with a 23-11 final record including a fantastic come-from-behind win against Kansas State in the Big 12 Championship Game.

So let’s explore…what if Branndon Stewart had won the starting job at the University of Tennessee… and let’s say that Peyton Manning remembered coach RC Slocum saying that they were going to "air it out" (despite having 3 all-star running backs). And suppose Peyton, having seen the writing on the wall and a future as a career back-up at Tennessee (sounds weird to even say it) decided to transfer to College Station. Below is a narrative of what that alternate reality might have looked like. 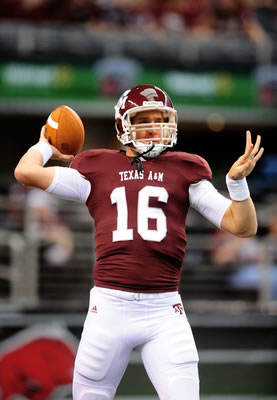 The 1996 season starts off on a tough note with a loss to BYU. Manning operates within the confines of the offense, and has a workman like 20/28 performance, but the defense is unable to overcome the BYU offense, led by QB Steve Sarkisian, and falls 41-37. The Aggies rebound well with a tough win over what should have been an easy opponent in Southwest Louisiana State. Manning does well enough to lead A&M to a victory over Texas Tech, but finishes the season with a blowout loss to the University of Texas. Final record: 8-5 with a loss to Iowa in the Builder’s Square Alamo Bowl.

The 1997 season starts with a lot of promise, and Manning is the undisputed starter…or at least we thought he would be. RC Slocum is enamored with sophomore "dual threat" QB Randy McCown, who splits time with Peyton through the first few games, but slowly and surely McCown gets more playing time than Manning, and is named starter against Texas Tech. McCown gets off to a slow start against the Red Raiders, and Slocum puts Manning in late in the game. Peyton is able to lead the team to a final late score to beat the Raiders 20-13. Manning has an even more heroic showing in the following week’s game against Oklahoma State, where he’s able to lead the Aggies to a thrilling 28-25 win in overtime.

The Aggies finish that season with a blowout loss to Nebraska in the Big 12 Championship Game (no one was beating Nebraska that day), and a loss to UCLA in the Cotton Bowl. Final 1997 record: 10-3.

After the 1997 season, Manning realizes that Slocum is likely to make McCown starting QB for the 1998 season. Despite having the option to appeal for an additional year of eligibility, he decides to declare for the NFL draft. After a terrific showing at the combine, he makes his way up the draft boards and is widely considered the second best (albeit distantly second best) QB to Washington State’s Ryan Leaf, and is selected by the Indianapolis Colts with the 32nd overall pick.

McCown goes on to have a successful 1998 season, until he breaks his collar bone against the Texas Longhorns late in the season. Backup Matt Schobel (who, given depth issues, decided against transferring to TCU) steps up into the starter's role in the Big 12 Championship against Kansas State, but is unable to overcome the mighty Wildcats as they romp to a 36-14 victory. Kansas State goes on to defeat #1 Tennessee in the Fiesta Bowl to win the first ever BCS national Championship.

So there you have it. A few more wins, but a huge loss against K-State is the result of Manning transferring to Texas A&M. I’d be curious for you Vols fans to chip in to let me know how Fulmer’s team would have done without Peyton. As always, criticisms and discussion are welcome!