A tweet on Monday night from Mark May to Johnny Manziel made the Aggie fanbase very unhappy. So we began digging and found that Mark May lives in a very fragile glass house.

Alright Johnny Football enough is enough this is your last wake up call STOP BRINGING SHAME TO THE GAME !

This tweet from Mark May to Johnny Manziel set Aggies off on Twitter and message boards. Relations between Aggies and Mark May were already soured after he said things like "if they go to the SEC, they're gonna be at the bottom of the SEC, maybe one step ahead of Ole Miss," during conference realignment. Mark May was, of course, wrong and we included him in our 2012 Media Crow Eating Tour.

Mark May also has a history of being terrible at Twitter, but in June tweeted advice to Johnny after the "can't wait to leave College Station" incident.

Advice to Johnny Football do a 3 count before hitting send 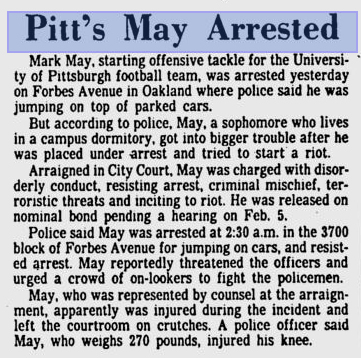 So now that you know why Aggies dislike Mark May, you should also know that most other fan bases do too (hi, Ohio State). Just after Mark May tweeted about Manziel shaming the game, a poster named DRE06 on TexAgs dug up a story that Mark May was arrested in 1979. Here is an article from the Pittsburgh Post-Gazette dated January 29, 1979. As you can see, Mark May was arrested for disorderly conduct, resisting arrest, criminal mischief, terroristic threats, and inciting a riot. That's quite a list of allegations! Racking up five charges in a single incident is no small feat and certainly surpasses anything Johnny Manziel has done. At the time of the arrest, May was a sophomore offensive lineman at Pitt. 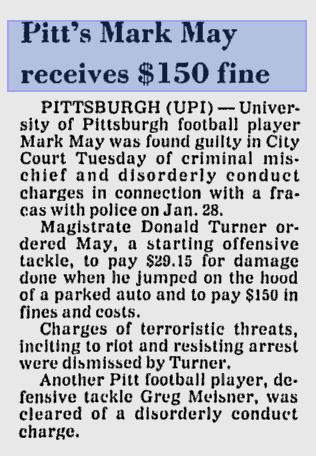 I wondered if the 1979 arrest was just the tip of the iceberg and decided to do some more digging. I found that ultimately Mark May was found guilty of criminal mischief and disorderly conduct according to this article from the Beaver County Times. He paid a $150 fine and about $30 in damages. I don't have a financial calculator handy, but I imagine the present value is about the equivalent of two regular season courtside tickets for Johnny Manziel. Three of the charges against Mark May were dropped, so we can't say conclusively that he was trying to start a riot. But it's fun to paint a mental picture (or MSPaint one in the comments below).

Could it be that Mark May learned from his youthful transgressions and is providing advice to Johnny Manziel based on his own experiences? What might Mark May tweet to his younger self if he had the opportunity? We know that May matured after college and put his shadowy past behind him. Right? RIGHT?!?! 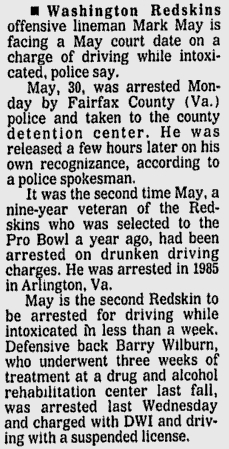 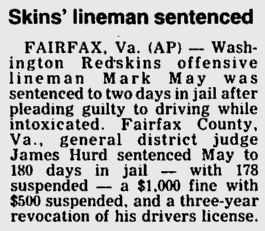 Oh, dear. I discovered that Mark May was arrested twice for Driving While Intoxicated during his pro career with the Washington Redskins. According to this article from the Reading Eagle, May was arrested once in 1985 and again in 1990. Following the 1990 arrest, May was sentenced to two days in jail (180 with 178 suspended) and a $500 fine ($1000 with $500 suspended), as reported in the Rome News-Tribune.

Mark May was 30 years old when he was picked up for his second DWI. Johnny is 20.

Given all of this new information, I have some advice for Mark May:

As for Johnny Manziel, I have two bits of advice. Don't end up like Mark May. Do check out his updated Wikipedia Page.

@spadilly sent us this article on Mark May's 1990 sentencing. May's blood alcohol level was 2 times the legal limit and he was seen swerving in traffic and tailgating. 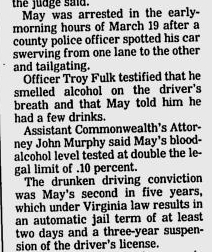 Mark May responded to all of this with a tweet around noon CT on Tuesday.

Thats why I can critique experience

It would have been helpful to mention this before you started talking down to people. Also, punctuation is important.