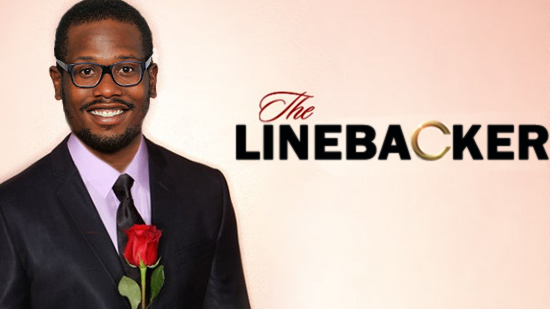 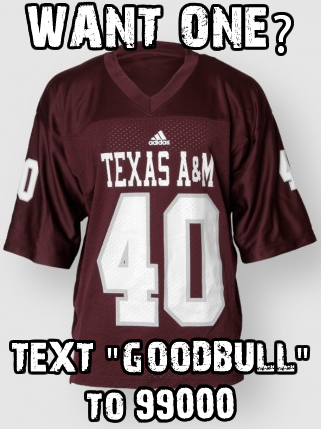 CONFESSIONAL TIME--THIS JERSEY IS ONLY GOING TO PICK ONE OF YOU: Text GOODBULL to 99000 to enter for a chance to win a replica Von Miller #40 jersey (pictured on right). Just for entering, you'll receive an online coupon code good for free shipping on any online order for the rest of the week! Great stuff from our friends at Aggieland Outfitters. This item has been specially exempted from the jlemmons96 jersey age cutoff. Why? Because it's Von Chopping Miller is why.

IT BEGINS. SEC Media Days kick off today and out of the 1200+ credentialed press members who will be attending, none of them are us. The whole circus will be documented on the main SB Nation page here. Follow along with our very own StoryStream right here for Aggie stuff. Sumlin and company take the stage tomorrow.

COACH DAMN SAILFISH. Video popped up yesterday of Sumlin going deep-sea fishing. Naturally, the entire crew busted into something known as the SAILFISH DANCE, which looks like this:

(I hope Coach is okay; he seems to have tweaked his back a bit at the end.)

Without suffering the potential consequences of being a hypocrite.

Good Bull here. Aggie grad students will be helping to spearhead a conservation effort that will be doing some high-tech restoration work on The Alamo to try to eradicate some of the effects of aging on the monument.


Include your name, where you're from, phone number (optional), and a description of any images or videos.