As the world eagerly awaits the premier of SHARKNADO, Thacktor kills time by answering questions from Twitter in The Wildcard.

It's Thursday which means I'm answering questions solicited from the Good Bull Hunting Twitter Community. If you have something that you feel I didn't get to, ask it in the comments and I'll answer there. Hell, anyone can answer down there and that makes it more entertaining. Let's all get together in the comments section later this evening with a bottle of your favorite libation and SHARKNADO on the DVR. What do y'all say? See you at 10:00 CST, that's when I'll be starting it up. Now let's get to the questions...

For those who aren't initiated, here's what Brian is referring to. 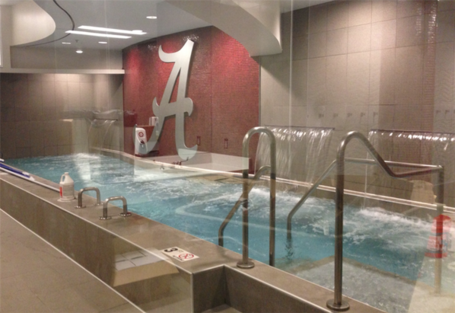 No, you aren't looking at Forrest Gump's bathroom. That's a locker room (roll tide). And let me tell you this, if I'm gonna jacuzzi, I need a waterfall (roll tide). What? Your school lacks the water features I desire (roll tide)? Well I'll just take my business to Tuscaloosa.

@thacktor predict the dumbest damn thing that will happen this season. Go big.

Is the Longhorn Network still a thing?

@thacktor what would life be like had nsync stayed together?

Unless you're talking "Butterfly Effect" level stuff here, and then I don't know. I guarantee you that Justin Bieber never gets a shot should this world exist. Or maybe he does, destroys 'N Sync and becomes much stronger than we could ever imagine. WE WOULD ALL BE BELIBERS!!!!!

The horror. I need a shower now.

Let's go down that list a little bit, shall we? I'm not going to sit here and knock Hook. For some reason, it's my parents' favorite movie to break out during the holidays. They swear it's a Christmas movie. It's not. Die Hard is. That's beside the point, though. Spielberg directed movies that I prefer to Hook include: Raiders of the Lost Ark, Indiana Jones and the Temple of Doom, Saving Private Ryan, Jaws, Empire of the Sun, Indiana Jones and the Last Crusade and Jurassic Park. I'm not saying Hook is far worse, I just prefer watching all of these. I mean Rufio is a badass, but he's no match for Indiana Jones, a T-Rex or the entire Platoon from Ryan.

@thacktor I'm not a woman, per se, but I've often wondered what it'd be like to be a pro sports wife. Which is the best sport to marry into?

Sterling, you're always good for a question that's just a bit off-center. I like you. How often would you say you wonder what pro athlete wifedom would entail? Is this a positive fantasy for you or are you wondering if your wife compares herself to the athlete wife?

I don't know if we can generalize as to which sport would make for the best wife situation because every couple is different. I would say the PGA, but I'm pretty positive these guys make the NBA look like Cub Scouts on the weekends. There's no way I'm suggesting that you become a NHL wife. Maybe NASCAR? I think that's your best bet, Sterling. There's a brick ton of cash in NASCAR and tons of travel. Can you handle that one little risk factor of your spouse dying in a fireball at 1,000 MPH? If so, go for it! Find you a nice, well-sponsored driver and hitch your wagon to his or her tailgate. That last statement is absolutely not a euphemism. Just learn how to work a stick.

@thacktor So, thanks to TexAgs, I read the full CB game thread from Land Thieves. Warning: High Enjoyment Levels http://t.co/FjnMl1Rmwu***

Selected quotes from Sooner fans before the game:

I should stop posting these, but it's too much fun to have all of this arrogant pre-game smack all in one spot! More? YES MORE!

I really like the "Johnny Goofball" line. Also the constant capitalization of "OU." That's a strong commitment to a bit, Sooners. I respect that. Anyway, if you wanna see a full meltdown, click that link in Chad's tweet. Sooners, no harm no foul here. Just having a little fun.

Wanna debate Spielberg movies? Do it in the comments.