Hullabaloo #3: What would you undo in Aggie Football history?

We continue our off-season roundtable series by using a mulligan on moments in Texas A&M Football history.

Share All sharing options for: Hullabaloo #3: What would you undo in Aggie Football history?

If you could go back in Texas A&M football history and undo one thing, what would it be and what would you do instead?

rcb05, porkpie hat wearer: Our biggest "mulligan moment" has to be the complete lack of facilities upgrades in the 1990s. This was one of the biggest factors in us falling behind Texas and Oklahoma in recruiting, as they dumped millions into locker rooms, weight rooms and practice facilities while we were content with Netum Steed. We've spent the better part of the last 15 years just playing catch-up.

If the Bright Complex opened in say 1998 (instead of 2003), and the Davis Center opened in 2002 (instead of 2012), that would've gone a long way towards keeping ourselves on par with our rivals. Sure, they would have still been very successful (believe it or not there actually was a time when Mack Brown knew what the hell he was doing), but you wouldn't have seen the mass exodus of blue chip recruits to Austin and Norman if A&M had been proactive and kept up in the facilities arms race.

OrionHjarvis, swaggercopter passenger: The hiring of Dennis Franchione. May he rot in Hell.

Dr. Norris Camacho, BAS diagnoser: If I could go back in time and change one thing, I'd go back to the 1981 SMU game and take away that dude's sword so we're not reliving that fiasco 30+ years later on various internet message boards. Then I'd go see "Time Bandits" in the theater.

Doug Keegan, Austinite: Can we change the outcome of a game? Does that count as "one thing"? If so I'll give a shout out to Old Army and say "win the 1975 Arkansas game". A&M was undefeated and #2 in the country before the trip to the Arkansas hills, and only that game and a potential Cotton Bowl with an overmatched Georgia team stood between the Aggies and a MNC. Talk to any old Ags about that Arkansas game and the pain is still simmering.

If an entire game outcome is too big for "one thing", then I'll go ahead and copy RC Slocum's likely answer: Give Kevin Sumlin the OC gig prior to the 2001 season instead of Din Babers. ("But his name is Dino," you say. No, it's not. The man had no O.)

Unfortunately, RC didn't wise up and turn the reigns over to Sumlin until it was too late, nearly a month into the 2002 campaign. Often forgotten in a mediocre 8-4 season, the 2001 incarnation of the Wrecking Crew was downright filthy, a national Top 10 unit led by future NFL stars Ty Warren and Rocky Bernard. It's not unreasonable to believe Sumlin would have been worth another 2+ wins in 2001 (I personally think A&M would have won the Big XII), and several more in 2002 as well. And the Italian curse word "Dennis Franchione" is never associated with Aggie Football. 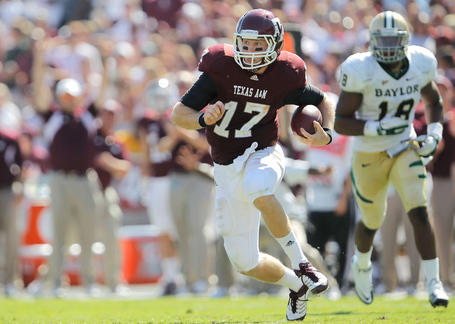 stringsays, hypothesizer: If I could undo one thing, I’d go back to 2010 and pull Jerrod as a starter after the Florida International Game. It would have been impossible to do, given his performance in the prior two weeks (threw for close to 700 yards/no INTs/68% completion), but it was obvious against FIU that his shoulder wasn’t quite right…obvious to the tune of 4 interceptions. Jerrod then threw 4 INTs in one of the more important games of Sherman’s tenure the following week against Okie State.

I often wonder what would have happened had we put Tannehill in against the pokes. I think Jerrod was a fantastic athlete, but I think Tannehill was simply a better fit for Sherman’s offense (as evidenced by them reuniting in Miami). I think we could have (and probably would have) won that game and possibly Arkansas the following week (Jerrod was 15/41 for 2012 yards that game).

If we win those two games, and the rest of the season goes as it did…that puts us in either the Fiesta Bowl (against a beatable Connecticut team) or maybe even in the national championship game against Auburn. Either way, it’s a BCS appearance in year three under Mike Sherman.

I don’t know if anything regarding the excruciatingly painful 2011 season would have changed as a result of us being in the BCS in 2010, but I do think Tannehill could have gotten us there.

cuppycup, Barbie owner: I would have never beveled the logo. Most people blame certain coaches for Texas A&M's slide into obscurity in the 2000's but I think people, including recruits, stopped noticing us because our logo looked asymmetrical. If our logo was clean and the highlights were geometrically sound, celebrities and media talking heads would have been all over Texas A&M's proverbial nuts in seasons like 2003 where we lost to the Oklahoma Sooners 77-0. Of course, this assumes that we still would have lost to Oklahoma with a superior logo which is unlikely. We also would have generated enough additional revenue from non-beveled merchandise to make major facilities upgrades. #levelthebevel