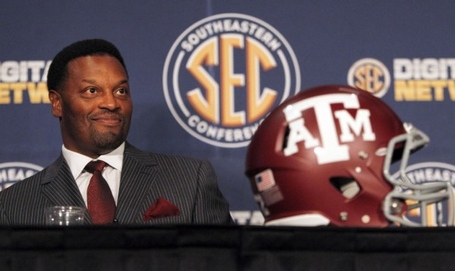 The official press schedule for SEC Media Days has been released, but Thacktor and I have been wondering what other shenanigans can the coaches of the SEC expect next week? We have outlined a rough schedule of events, let us know in the comments what else they could be up to.

5:00 AM - An excited Gary Pinkel arrives, is informed by hotel management that he is half an hour late for his shift, and is given a bellhop's uniform.

9:30 AM - Bielema pulls his Harley directly into lobby and hands his beer to a blow up doll riding bitch with "Bieliever" written on the crotch.

10:00 AM - Steve Spurrier arrives at the hotel in a Rolls-Royce golf cart and tosses the keys to Gary Pinkel, informing him that he counted the change in the ash tray.

10:00 AM - A member of the press inadvertently engages in a staring contest with Will Muschamp

10:15 AM - Press member is taken in for emergency eye surgery.

2:30 PM - The press conference with Mark Stoops is taken very seriously by everyone.

10:00 PM - Kevin Sumlin enters the hotel bar, waves Gary Pinkel over from across the room, and orders a whiskey. Neat.

11:00 AM - Gus Malzahn calls security after being asked a question about his “girl parts” by a reporter who bears a striking resemblance to Gene Chizik wearing a gag store mustache and glasses.

4:00 PM - Sumlin begins his press conference by apologizing to reporters in the back of the room who are tripping over his gigantic member.

4:55 PM - A sports writer wakes up from year-long coma to ask how Sumlin thinks his Aggies will do against the big, bad, scary SEC.

5:00 PM - Sumlin is asked if he likes "this gig." Sumlin tries to respond and reporter informs him, "That wasn't the question. Do you like your job?" A confused Sumlin begins, "I like my job-" Angrily, the reporter butts in asking, "DO YOU LIKE BEING COACH OF THE AGGIES?!?!" Sumlin finally shoots Gregg Williams in the leg and carries on with his day.

1:48 AM - While Sumlin assists him as he vomits in the toilet, Bielema explains that he is "Bielemic", giggles, then sobs uncontrollably until he passes out.

3:05 AM - Hotel management receives a complaint from Hugh Freeze's room that all of the adult films have been replaced with highlights of Johnny Manziel, making him unable to perform his signature masturbatory move "The Blind Side".

7:45 AM - Dan Mullen wakes up to find the hashtag #SNOWBIEL2013 written on his forehead.

9:35 AM - Nick Saban’s level of contempt for the media physically manifests itself as a black ooze seeping from his pores, instantly killing those members of the press who are busy frantically fellating him.

11:00 AM - The press corps assures Mark Richt that this is definitely the year for Georgia.

3:15 PM - Les Miles pontificates on the ramifications of overpopulation in sub-Saharan Africa as it relates to fighting global communicable disease while wearing only one shoe.

4:52 PM - Johnny Manziel tweets that he is thinking about quitting football to become a chinchilla farmer. The energy generated by the resulting media frenzy results in the end of life on this planet as we know it. Nick Saban teleports to his home dimension while complaining about how this affects his team’s two-a-days schedule.