What if Texas A&M hired Mack Brown or Bob Stoops after 1996?

Seven more weeks until college football, and the butterfly effect is back. I promise that these columns won't always be about coaching changes but it’s hard to deny the monumental impact that the right (and wrong) coaching hire can have. So we’re going to continue the exploration of coaching hypotheticals.

Share All sharing options for: What if Texas A&M hired Mack Brown or Bob Stoops after 1996?

I started off this week wanting to explore what would have happened had the Texas Longhorns decided to hire Gary Barnett instead of Mack Brown…but apparently someone already did that. So instead I decided to look at what would have happened had Texas A&M fired RC Slocum after the 6-6 season in 1996 (which has some ramifications for the Longhorn program).

I think it’s important to note that you could have made an argument for Slocum to be replaced after the '96 season. In 1995, the Aggies came in highly ranked with a Heisman trophy candidate and limped to a 9-3 finish including a loss on the road to Texas Tech and a loss at home to the Longhorns. The low points in '96 included losses to then Southwest Louisiana State (now Louisiana Lafayette…or U-La-La), and a total beat down at home by the Longhorns. The future of the program was in doubt. In this week's hypothetical we’ll explore what might have happened had RC been fired.

That being said, the following whimsical narrative will cause nightmares for some folks. Enjoy. 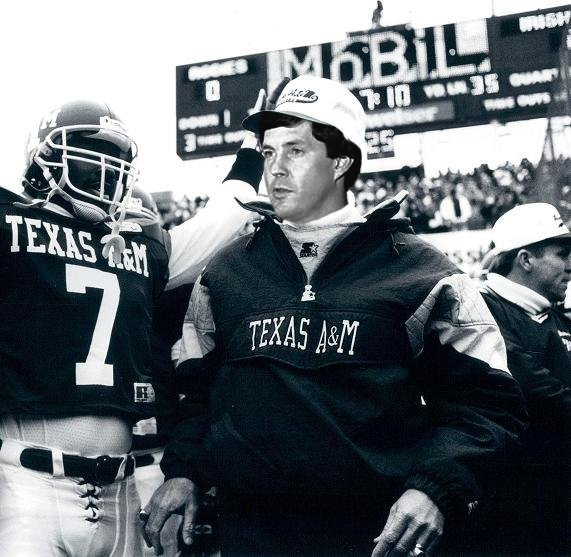 Option A) Wally Groff, Texas A&M Athletic Director, sets his sights on Bob Davie, defensive coordinator at Notre Dame and former Wrecking Crew DC. But prominent boosters insist that there be a full interview process—this was a hire that Texas A&M could not afford to get wrong. They reach out to the North Carolina coach who had just led his team to a top 10 finish. The Aggie brass has an airport interview with Mack Brown in Atlanta in December 1996. Brown wins over everyone in the interview and is brought to campus as the lone finalist for the position. Hearing assurances that facilities upgrades are on the horizon and that Texas A&M is committed to success, Mack Brown is named Head Football coach at Texas A&M in January 1997.

Option B) Wally Groff, Texas A&M Athletic Director, feels the need to resurrect the Wrecking Crew and bring a dominant defense back to Aggieland. After dismissing Coach Slocum in December of ’96, he immediately consults with donors on who the next coach could be. After vetting both Bob Davie and Mack Brown, Groff finds himself enthralled by a dominant Florida defense performance in the 1997 Sugar Bowl led by Defensive Coordinator Bob Stoops. Following the game, Groff reaches out to Bob’s agent and flies out to Gainesville to discuss the open Texas A&M position. Bob likes what he hears and in January of 1997, Bob Stoops is named head coach of Texas A&M.

Oklahoma (in case of option B)

Coming off of a 5-6 season, the decision is quickly made to fire coach John Blake after three seasons of mediocrity. First year Athletic Director Joe Castiglione beats Clemson to the punch and offers the open job to Tommy Bowden, who is coming off of an undefeated/ Top 10 season at Tulane. After four years of being just over .500, and routine third place finished behind both Texas and Texas A&M, in 2002 Castiglione realizes it’s time for a change. Fortunately second year Alabama coach Dennis Franchione is looking for a new opportunity. Franchione leaves Alabama to be the Coach at the University of Oklahoma bringing with him a resounding energy to the program, but fans are quickly disappointed by a dismal 2003 season. Fran lasts four more years and is replaced in December 2007 by Butch Davis.

Clemson (in case of option B)

Texas (in case of option A)

After a dismal 1997 season, including a loss to first year Texas A&M head coach Mack Brown, Deloss Dodds seizes the reigns of the Longhorn football program. His search is short (having mentally made a decision months ago) and he reaches out to Northwestern Coach Gary Barnett as the primary candidate for the Longhorn coaching position. 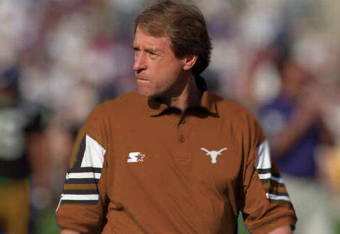 The news isn’t received well…Barnett is coming off of a 5-7 season…but Dodds is able to quell the concerns by pointing to Northwestern’s Rose Bowl appearances and Barnett turning running back Darnell Autry into a Heisman candidate. Barnett puts together talented teams and is able to win a conference title in 2001, but is ultimately fired after a disappointing 5-7 season in 2003.

Texas begins their search anew, and looks north to a promising young coach at a high performing program. Boise St. coach Dan Hawkins has led the Broncos to a 33-6 record over the three years and is seen as a can’t miss prospect. Hawkins is succeeded by his offensive coordinator, Chris Petersen, who continues to have a high level of success.

The Hawkins hire is an unmitigated disaster. Hawkins struggles to endear himself to the fans, and ultimately goes on an odd tirade about intramurals during a pre-singning day press conference. After three short years of struggling to get above .500, Dodds finds himself on the verge of being ousted. Fortunately enough, Miami Dolphins head coach Nick Saban’s growing discontentment with the NFL leads to him asking his agent to place a call to Bellmont to inquire about the a possible job opening, and in January of 2007 Nick Saban is named Head Coach at the University of Texas.

North Carolina (in case of Option A)

Colorado (in case of Option A)

So there you have it. Bob Stoops or Mack Brown at Texas A&M, Nick Saban ending up at UT, and the Sooners experiencing their own Frantastic era. Discussion and criticisms are welcome!