The NCAA Football series has always been the best video game franchise in college sports, but Aggies have often lamented that the Kyle Field experience was not real enough. This year, EA Sports answered the call and made the Aggie gameday experience more realistic than ever.

Share All sharing options for: Keep it real with EA Sports NCAA Football '14

Texas A&M is one of six teams available in the NCAA Football '14 demo. You can square off against Oregon in a high-powered offensive showdown. The video on the right shows how EA Sports kicked the realism up a notch for Kyle Field. We have yells (and Yell Leaders), many variations of Adidas uniforms, the Sumlin visor, Reveille, and the War Hymn. We also have a pretty shifty QB #2. EA Sports visited Kyle Field last season and even took in a Midnight Yell to try to enhance the video game atmosphere. NCAA Football '14 will be released on July 9th. Meanwhile, you can find the demo here: XBox | PS3

Last week we had an opportunity to interview Christian McLeod, a game designer for the NCAA Football series. Christian's passion for college football and making the game realistic really comes through in the interview. When asked whether Texas A&M's great 2012 season motivated EA Sports to improve the Aggie gameday experience, Christian said, "You guys have one of the best fan bases in all of college sports and we wanted to make sure we gave you guys some love this year." The interview ran nearly 30 minutes, but it's well worth your time to listen. Christian talks about everything that is improved this year from Dynasty mode to the Infinity game engine.

It looks like the Aggie backfield will be loaded in NCAA Football '14 and you'll notice that our QB is the top player. Actually, he's the top player in the entire game. Playing as the Aggies is going to be more fun than ever this season and maybe we'll be able to bump up the difficulty level with some success. Check out the entire list of our top 10 players below. 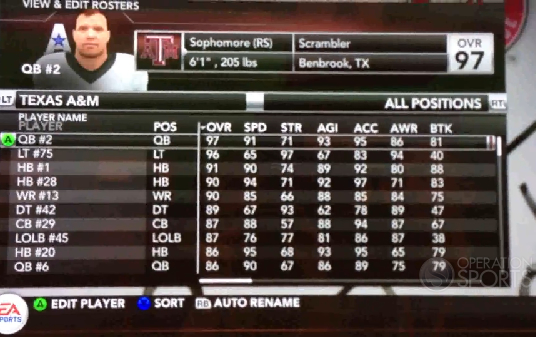 Texas A&M's overall rating in the game is 91 with a 95 on offense and an 88 on defense. I think everyone expects the Aggies to live up to that offensive rating with a returning Heisman QB and a ton of talent at skill positions and along the offensive line. The defensive rating might be a little low, but the Aggies are replacing players in key spots so we'll have to see what Mark Snyder has in store for us.

We invite you to "keep it real" (that's the theme of this year's game) in the comments. Let us know which new features you're looking forward to and give us your response to the team and player ratings. We are going to select one commenter (maybe more) to join us for another post where we'll use NCAA Football '14 as a springboard to discuss key issues for this year's Aggies. Thanks and gig 'em.