Happy July to ya, muthascratchers.

FUN ADMINISTRATIVE NOTE: the good Dr. Norris Camacho (doc's specialties include humor and reverse vasectomies) flipped the keys to the Monday Daily Bull General Lee to yours truly. The focus will center primarily on Ag/SEC football and idiocy. These are a couple quick clips of me once I got the news from the good doctor. 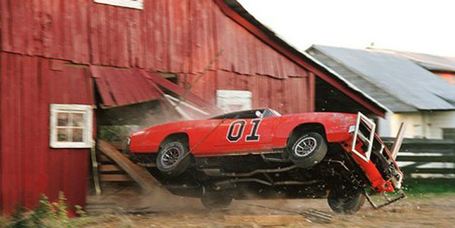 DO WE CALL HIM KYLE FOOTBALL? A&M quarterback verbal pledge Kyle Allen stole the show in Chicago at the Rivals 5-Star Challenge. The No. 1 pro-style quarterback hailing from Scottsdale, Arizona did all those things like "big arm", "footwork", "moxie", "mechanics", and shit. He did them well enough for me to already issue a decree calling him HATE BARN ALLEN. Excited to have you on board, Hate Barn QB1.

WHEN AL.COM FARTS, YOU LISTEN. The preferred media outlet for all things RAWL TIHADE and rounds of lemon drop shots at SEC Media Days has offered a preview on the 2013 Texas Aggie football team. The comment section seems to be disabled on this piece, unfortunately, thwarting endless trolling opportunities. This particular sentence hasn't gotten old "Last meeting, 2012, 29-24 Texas A&M at Bryant-Denny Stadium."

TEXAS BEER. Our own baseball Billy Beane is also the Babe Ruth of expensive beer oft served in stemmed glasses. jimmermann11 has a field guide to Texas' craft beer scene that will likely find you in a tasty, well-crafted ditch. I was saddened to see that my drinking old Lone Star out of a 10 gallon hat did not make the directory

A TALE FROM COLORADO. I've moved between Colorado and Texas too many times to count. I currently hang my hat in the state with mountains and marijuana. Widespread Panic (shout out to Georgia Bulldogs) plays four consecutive shows annually at the stunning Red Rocks here in Colorado. I currently live with my cousin who loves Panic and recreational illegal fun. He had what seemed like a VW van full of hippies staying at our place this weekend and they went to ALL FOUR SHOWS. A shroomed-out hippie sauntered into my room at 4 AM lost last night and I nearly went Von on his ass. MARK RICHT HAS LOST CONTROL OF WIDESPREAD PANIC.

Moral of the story? I don't care how "weird" Austin thinks it is. Colorado is weirder. I still love it.

P.S. HIVEMIND. I think I'm going to the game in Oxford this year. Where does one stay when everything nearby is booked? If you suggest Memphis or Tupelo you're banned.

Just kidding. We don't ban anyone. Happy Monday and July, gang. College football is played next month. Make it big.