WHO WEARS SHORT SHORTS? KDS does, so go ahead and call him out on it. We dare you. He also rocks the bevel-less logo and does whatever the hell he wants, so go ahead and meme him if you'd like. So far, redeyeoneaggie's has become something of an internet sensation. Well done, sir. 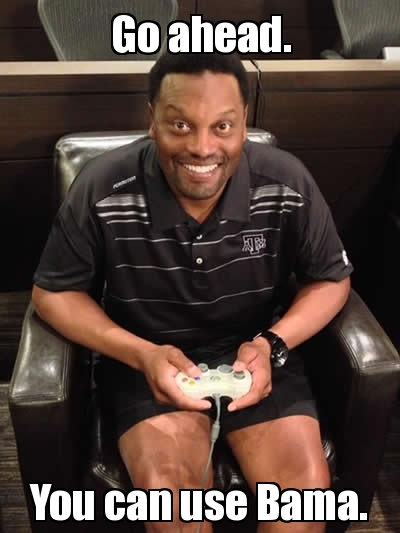 Bring it on home. Pat Henry and the track team kick off day 2 of the national outdoors championships in Eugene today. Currently, the men are ranked #1 and the women ranked #2. Full schedule and coverage info available on Aggie Athletics.

That other QB guy. The MLB First-Year Player draft starts today, so keep an eye on Kenny Hill. So far, he's still open to playing both sports, as long as the coaches are okay with it.

Grudging respect. Spencer Hall sat down with Art Briles recently, and he even managed to answer an A&M question without saying "is that an A&M question?". At least not on record.

Now, I wasn't surprised A&M did well in their first year in the league. They're coming in with a different style of play, and the thing about being in a big league like that is there is a tendency for everyone to be pretty much the same at the end of the day. They may have had a few variations, but A&M was different completely from first play to 85th play. They're gonna be a little bit different from their mentality to their formations to the philosophy standpoint.

No, but really, it's a good interview and a good take on an intense coach.

Have a great Thursday, y'all.