Taking a look at the Texas-Mississippi Football Contract

On Tuesday, it was announced that the Ole Miss football game vs. the Texas Longhorns on September 14th will be shown on the Longhorn Network. How does such a high profile game go on the missing persons list and the back of milk cartons? We have the actual contract and break it down for you.

Share All sharing options for: Taking a look at the Texas-Mississippi Football Contract

Our Red Cup Rebellion friends got a rude awakening this morning as their September 14th match-up against the Texas Longhorns was announced to be shown on the Longhorn Network. This is a network that the fine people in Mississippi have little to no access to, just like everyone else. What does the actual contract between the schools say, and what are the options for Ole Miss fans? Let's take a look.

Now, the first thing you need to know about these contracts if you have never seen one before is that they are all pretty generic. The only thing that changes in them is the name of the schools, the amount of money it is going to cost for the visiting team to show up if you are playing a one game series against the Sun Belt, the amount in damages to break the contract, and the number of tickets the visiting team will receive. That is it. We were also able to obtain contracts for the Longhorns' series against North Texas, New Mexico, and Rice; they all read the same as the Mississippi contract. 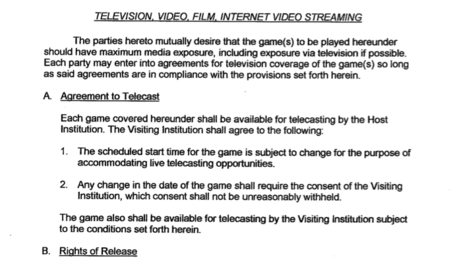 In terms of TV, the game's rights are under control of the host institution. If they belong to a conference, like the Big 12, then the game falls under the Big 12's TV agreement with ABC/ESPN as well. This will usually be the normal route of distribution.

(It's also fun to read the line about "maximum media exposure.") 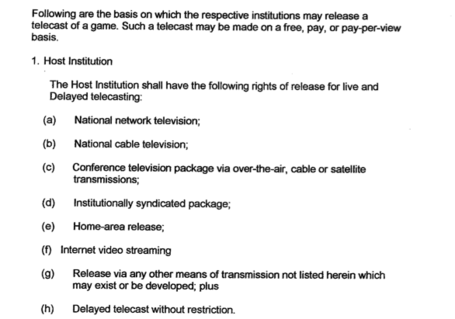 Under the contract (which was written in 2008, way before the Longhorn Network was around), it appears Texas has every right to put the game on the network through:

(c) a conference television package (some argue that the Longhorn Network is the Big 12's conference network),

(d) an institutionally syndicated package, and

(g) release via any other means of transmission not listed herein which may exist or be developed.

The clause (g) seems to be the one that permits the Longhorn Network to show the game. Sneaky, sneaky Mr. DeLoss. 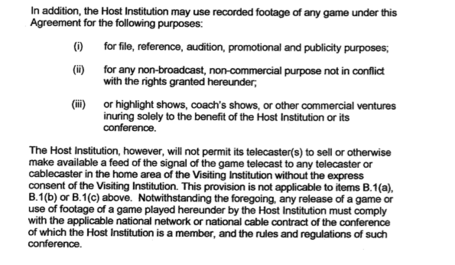 As for Ole Miss, it has the right to live telecast the game into its home area. This clause seems to already be going into effect, as Ole Miss announced it is working with ESPN to make sure Rebel fans can view the game in Mississippi.

Finally, I mentioned above that this contract was agreed to on April 10th, 2008, well before the Longhorn Network was even on the radar screen.

What about new, updated contracts that the Texas Longhorns are writing and other institutions are agreeing to? Would those institutions have to agree to the Longhorn Network televising the game when played in Austin?

Here is an excerpt from the contract signed by the University of Texas and Notre Dame to begin playing an out-of-conference football series in September 2015. The 2016 and 2019 contests will be played in Austin, with the Longhorns serving as the host institution. 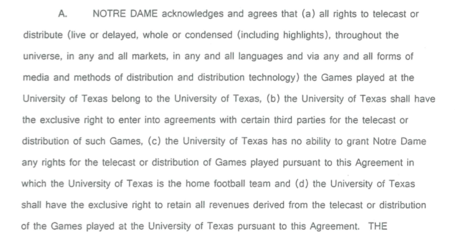 This section is far more complex compared to the Ole Miss document. It sure reads as if Notre Dame has essentially agreed to let the football game air on the Longhorn Network. Something to look forward to, Notre Dame fans.

Also Aggies, do you believe Texas A&M would agree to such language in order to resume the Lonestar Showdown? Not a chance in hell, and it could be a major hurdle to get the series started again once both schools find the desire, if ever, to do so.

If Texas continues to push this to future opponents when scheduling games, who will agree to such contract language? What school wants to be shown on the Longhorn Network with its current limited availability? That will surely be a roadblock for some teams. Compounding the problem will be increased significance of these out of conference contests and strength of schedule, moving to the College Football Playoff in 2014. The Longhorns already play in a watered-down Big 12, and the strength of schedule could make or break their chances to make the playoff in the future. Quite a cluster, DeLoss. Quite a cluster.

A special thank you to our friend spadilly, who obtained the contract from the University of Texas through the Texas Public Information Act. Without his work, this post would not be made available to you. Make sure you follow this good Ag on Twitter.