Hullabaloo #1: How will Year 2 for Johnny Manziel compare to his Heisman season?

This is an experimental roundtable feature where we, the GBH authors, chime in on a specific topic and then you, our beloved readers, can tell us why we're idiots.

Share All sharing options for: Hullabaloo #1: How will Year 2 for Johnny Manziel compare to his Heisman season?

How will Johnny Manziel's success in Year 2 compare to his debut Heisman season?

OrionHjarvis, recruiting stud: I expect Johnny to continue to develop as a passer and improve on those stats from 2012. Losing Ryan Swope will hurt but I'm confident with our recruiting at the position that you'll see 2-3 guys step up and replace his production. On the ground, I think we'll see a drop off in his numbers this year. With Clarence McKinney calling the plays and stable chocked full of studs in the backfield, we should see a much more balanced attack.

As for personal success, Johnny's only hope to repeat in his Heisman campaign will be if A&M is playing for a Natty to go along with similar stats from last year. That speaks more to the absurdness of Heisman voting and the idiots that have those votes than it does Johnny.

Dr. Norris Camacho, freshly minted blog manager: 2013 is going to be very different for Johnny Manziel. People are going to be paying total attention to him, unlike last fall. He's going to be scrutinized and keyed on from the get-go. Expectations will by sky-high, and he will be looking to do anything that will give him an edge in silencing his detractors.

For these reasons, I think that he will ditch the safe, cuddly Scooby-Doo Halloween costume and go for something a bit more dangerous. Something like Jon Snow from Game of Thrones or The Lone Ranger. Maybe even throw on some shades and a Red Raider long-sleeve tee and go as Kliff Kingsbury. Getting photographed on the street this year will be no problem. That's why Johnny will use his newfound status to extend his freedom of expression a bit further.

rcb05, photoshop ace: His stats will decrease, but success will increase. Johnny Manziel will be hard-pressed to replicate his statistics from 2012 (there's a reason nobody else had ever done it before). Don't get me wrong, in this offense and with Johnny's play-making ability, he'll have some gaudy numbers; but we shouldn't expect (or hope) for him to be our leading rusher in 2013, and the number of scores he accounted for was just crazy. Plus, the only numbers anyone will really be worried about this coming season are the ones in the win column.

If the Ags can do enough to reach (and win) the SEC Championship, expect Johnny to come marching home with his second Heisman. Notice I didn't say undefeated, as I firmly believe we'll see a one-loss team come out of the SEC West this season. It'll just be a matter of holding the tiebreaker over the right opponent (cough-Bama-cough).

Johnny's run plays will be less improvisation, and more designed opportunities to get him into space.

stringsays, fanposting author: It depends on how you define success. As an individual player, I'd be pretty surprised if his stats resembled those of last year. I think we're going to have a slightly different philosophy offensively under Clarence McKinney—one that emphasizes the run game to a level that we didn't see last year. Johnny aside, the majority of our offensive playmakers are RBs, so it's Johnny's job (and McKinney's) to get the ball in their hands. That doesn't mean that Johnny won't take off and run/improvise. Johnny's run plays will be less improvisation, and more designed opportunities to get him into space. I especially look forward to the new emphasis on the run game in the redzone. Commitment to the run would likely have gotten us 6 in the LSU game after Trey Williams' big KO return.

Passing wise, we're going to miss Ryan Swope, and we need someone to step up into that slot WR spot. We'll be fine at outside WR, but I would guess that a majority of our balls went to the inside last year, which is another reason why Johnny's numbers might not look like last year. Johnny has an opportunity to prove that he's not a freak athlete playing QB, but rather he's a freak QB who's equally freaky at running a freak offense. I think Johnny's numbers won't look as good as last year's, but I think our offense will be more productive as a whole. 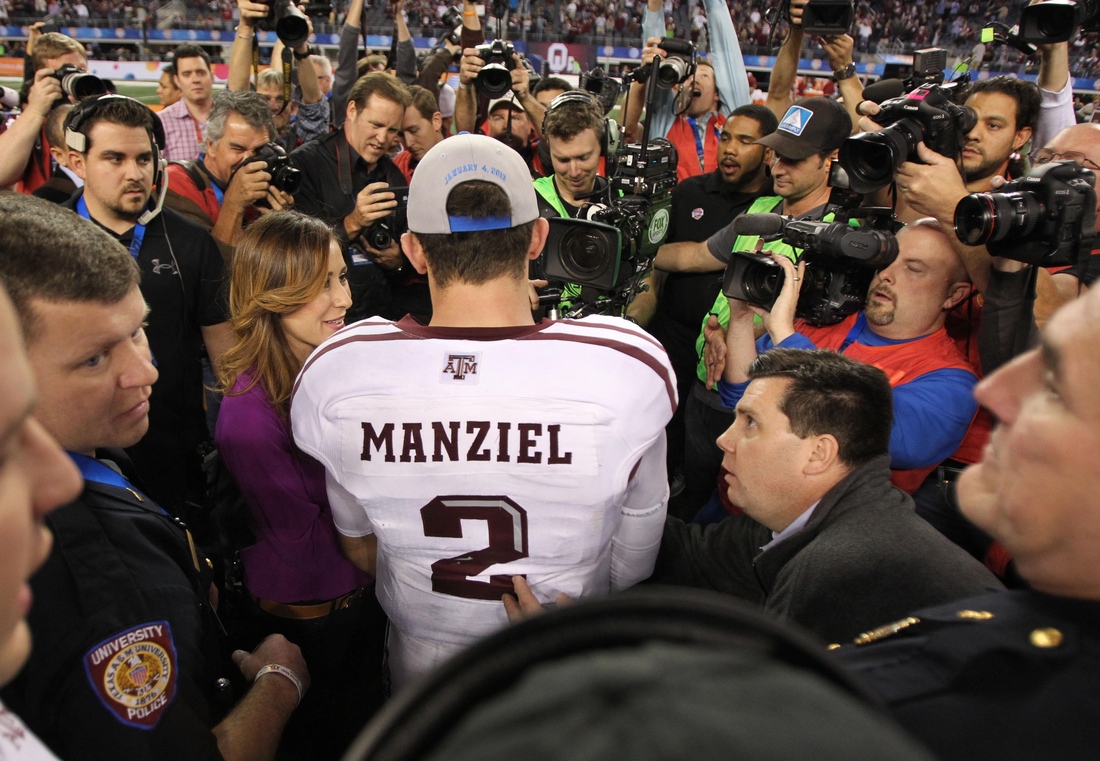 SpreadsheetAg, spreadsheet Ag: Teams are not going to be surprised by Johnny's athleticism, quarterbacking, and all-around exemplary style of play. However, this does not mean that they are going to magically be better prepared for him either, they just won't be frozen in awe when he makes the more-than-occasional legendary play (or three, or ten). If a skier survives and avalanche and then goes up to the middle of the next mountain and causes another avalanche, is he surprised when it happens? No. Can he stop it? No. Johnny "Avalanche"... just sayin'.

DerekAggie06, DJ hero: Let's be honest, what Johnny accomplished last year was simply remarkable. Nobody expected that to happen. Sure Johnny, Sumlin, Kliff and crew knew he would be good, but that was an other-worldly performance last season. I think the most important way to look at this question is to first try to understand the different benchmarks people will set for Johnny's success in year 2. You've got the scouts (mostly idiots) that think he needs to show a drastic improvement in arm strength (like I said, they are mostly idiots). You've got stat junkies that think the season will only be a success if Johnny beats his freakish, record-setting numbers from last season. Then you've got the group, this is where I can be found, that are going to measure success in how Johnny's development improves the team.

If Johnny shows some of the development NFL coaches want to see and is able to have even remotely the same level of statistical productivity, how can you not expect the team to have a better season?

The NFL scouts want to see Johnny more comfortable in the pocket. They want him to throw the ball away a little more instead of scrambling. Basically, they want him to be nothing like RGIII, Cam, or Russell Wilson (again, they're mostly idiots). As far as the stats guys are concerned, expecting anyone to duplicate the type of numbers Johnny had in 2012 is crazy. Just ask Chris Johnson. Of course he could demolish last year's numbers, and that would be just fan-freaking-tastic. That all leads to the third viewpoint. If Johnny shows some of the development NFL coaches want to see and is able to have even remotely the same level of statistical productivity, how can you not expect the team to have a better season? Johnny got better every single week last season from the aspect of looking like an elite college quarterback and there is absolutely no reason to think that trend won't continue here in a couple of months. As he improved week to week, players like Evans, Swope, Malena, etc. all grew and developed right alongside him. If there's one thing everyone should have learned last season, it's to not tell Johnny he can't do something. He'll absolutely prove you wrong.

Stewade, Tailgate mastermind: When you're asking an Aggie that question, you have to first understand the Aggie. When a new season is on the horizon, we, by nature, become two things: optimistic, and extreme. It doesn't matter if we're coming off a 4-8 season headed up by this guy after this game, we will still find a reason to believe that 2004 will be THE year. So take that insane framework, add in a Top 5 team with a returning Jedi Heisman-winner who played his best game against the team that had the most time to prepare, and pardon me if I don't care to half-assedly point out minor flaws in our receiving corps, and attempt to rationalize why I should temper my expectations for Johnny's second year. No. NO. I will, by my very nature, red-assedly predict that Johnny's 2012 Heisman victory tour will pale - PALE! - in comparison to his 2013 National Championship victory tour. And believe me, plenty of people outside of College Station would love to watch that circus unfold. So why would you expect anything less from me? I'm an Aggie during arguably the best time there ever was to be one. This kool-aid is delicious.

cuppycup, GIFologist: Johnny is going to provide a wealth of GIF content both on and off the field. He is going to work it harder, make it better, do it faster, makes us stronger, more than ever, hour after hour. Work is never over. On September 14, Nick Saban will tweet Bullshit like tonight is why I can't wait to leave College Station. Someone recovering from heat stroke will point out that it was a day game.

Ranger222, X's and O's, kisses and hugs: The answer to this question depends on what your definition of success is. Will Johnny compile the same statistical numbers as his Heisman season? No, I don't believe so. And I hope the answer is no. Last season, we asked Manziel to pull us out of some critical situations such as that 3rd down and forever from the Ole Miss goal line in the 4th quarter; single-handedly keeping up the scoring pace against Louisiana Tech; almost the entire Alabama game. He was truly Superman putting the offense on his back (or legs in many occasions) and leading us to victory.

This coming season, I hope he doesn't have to repeat those feats for us to win. This offense continues to evolve with the offensive skill players we bring in. We now have a stable of running backs headed by Ben Malena and Brandon Williams who can inflict damage in their own ways. Mike Evans is a future 1st round NFL talent. Jumbo athletes like Cam Clear and Ricky Seals-Jones give us unique matchup opportunities in the passing game. This offense was designed for the QB to be a distributor. I want Manziel to be a point guard and let the other talented offensive skill players to take over, attacking a defense up, down, over and every which way imaginable. That is where we will win the day. And the rest of the SEC I don't think will be expecting or ready for it.

So same numbers? No. More wins? Yes, and isn't that what the definition of success really is?

Lucas Jackson, law dog: If he stays healthy (knocks on wood), I think Johnny will have a great year. I expect teams to focus on containing Johnny's legs rather than his arm; after watching the spring game I think that is a mistake. One overlooked factor in last year's success was that the receivers did not drop many balls. If the WR corps comes through like last year, Johnny will have Keenumesque passing numbers.

I say around 4000 yards, 45 TD 10 INT, and 700 yards rushing with 10 TD. Heisman type numbers, but I think he loses to Braxton Miller, who I expect to have a Tebow type year for an undefeated (and untried) Ohio State.