Johnny Manziel is so damned meta that he's transferring to 1996. We deviate from the standard format to indulge in this scenario.

This week has been one huge pile of speculation upon another, so we'll just see what happens when Manziel dabbles in time travel.
COLLEGE STATION, TX, 1996--
Aggiebucks. Ultimate Frisbee. That one place on Texas Ave. that used to be that other restaurant. Johnny is Desmond from LOST: charismatic, carefree, and slipping through the time-space continuum to eventually get the girl when everyone thinks he's crazy.
GAME 1: BYU. Easy win. 300 passing yards, 80 rushing yards. 44-24 final score.
GAME 2: Southwest Louisiana. Seriously? This is a road game? THANKS, BILL BYRNE. 59-10 Ags, Johnny gets pulled early in the third.
GAME 3: North Texas. Same result: 55-0, but McCown gets some much-needed experience in the second half.
GAME 4: Colorado. Close, close game, but we get the 27-24 win at home. This Buffs team is damn good. Johnny is 2 hours late to the press conference after the game, but shows up happy.
GAME 5: Louisiana Tech. Win, 72-17. It's the least we can do if an actual RC offense put up 63 on them. Johnny is 9-10 in the first half for 275 yards.
GAME 6: Iowa State. Win, 41-17. Johnny takes a picture with Matchbox 20 after the game.
GAME 7: Kansas State. This is a salty Bill Snyder team, but we get the victory, 30-20. Johnny throws three picks and the crowd clamors for McCown.
GAME 8: Texas Tech. 34-20 win. The beginning of Spike Dykes' decline. Johnny has 4 rushing TDs.
GAME 9: Oklahoma State. We handle them, 38-10. Pre-revenge for 2003. Johnny has 450 yards passing.
GAME 10: Baylor. 80-3 victory. Still the Big 12 record for most points scored. Manziel and McCown each have over 200 passing yards.
GAME 11: Oklahoma. Win, 33-16. Hello. Average game for Johnny. One TD each rushing and passing. Johnny appears in a Potato Shack commercial the following Tuesday.
GAME 12: Texas. We inevitably slip up and lose, 29-28. BAS takes over during the entire month of December. Johnny is Polaroided several times in Galveston with various med students in the Dodge Daytona convertible he got from Ely at Allred Motors.
BIG XII CHAMPIONSHIP GAME: we lose 35-20 to Nebraska, one of the best college teams to ever play ever anywhere ever, etc. Johnny has one nice long TD pass but is sacked 5 times.
HOLIDAY BOWL: we beat Washington 41-28. Ags are 12-2. Johnny appears in a local San Diego grocery chain commercial spoofing "Simon and Simon" as AJ Simon. He is on the preseason Heisman watch list after finishing 1996 in sixth place, just ahead of Texas Tech's Byron Hanspard. Coach Slocum assigns Dat Nguyen as Johnny's roommate/mentor and there is no social media and everyone lives happily ever after. 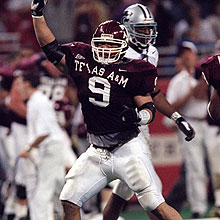