Under the microscope is better than under the thumb

All of this is interesting to us, because we’re Aggie football dorks. The thing we’re not used to is everybody else in the sports world caring too. But things could (and have) been a lot worse.

Share All sharing options for: Under the microscope is better than under the thumb

Remember when the offseason was boring? Yeah, me neither. In the past two months we’ve had the SEC Network announcement, Kyle Field renovation plans, Oregon schedule paranoia, the Kyle Allen commitment and – perhaps most notably – the newest episode of the Johnny Manziel show. Heck, even the Texas A&M Ken doll made news. Now obviously all of this is interesting to us, because we’re Aggie football dorks. We'll read literally any article if you slap an A&M logo on it (even if that logo is beveled). The thing we’re not used to is everybody else in the sports world caring too. It’s new, it’s weird, and we’re not sure we like it. But hey, things could (and have) been a lot worse. This new phenomenon was expertly summarized by thacktor in his dissection of the now-infamous Battalion article:

"See, we're in this magical place called "The Offseason." The Offseason is a place in which nothing is going on, so EVERYTHING is going on. That's right, Ags. Remember when we had no coverage? Remember when we were dying for some recognition? Well, this is what happens when you get recognition. You can't have it both ways. Don't sit here and tell the guy that helped bring said coverage and recognition to this campus that he needs to GTFO."

Preach it, brother. And to anyone else who may resent our new-found visibility and the tabloid/TMZ crap that comes along with it, I politely ask you to think back to the summer 2011. We were coming off of a 9-win season and a Cotton Bowl appearance, seemingly primed for a run at a conference title. Texas, meanwhile, had just gone 5-7. Conference realignment talk was rampant, as Nebraska and Colorado had just departed the Big 12; but most of the talk wasn't about us. In the eyes of many major conferences, as well as the media, we were simply the rider that would accompany the prize bull Texas into whatever conference they chose to bless with their presence. So there we were, seemingly stuck with leadership resigned to staying in a conference that yielded to DeLoss Dodds’ every whim. And the burnt orange cherry on top of this disaster was the newly-formed and uber-lucrative Longhorn Network. 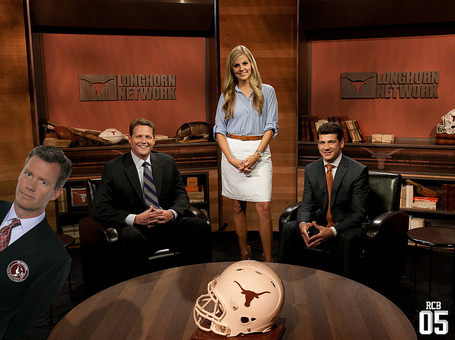 It’s easy to look back now and laugh, realizing what a failure The Longhorn Network has been so far. And in many ways that network is what drove us to join the SEC. So, on so many levels, thanks Horns. But think back to the utter defeat most of us felt when the network was first announced. We already knew that Texas had the advantage over us in so many ways, and gifting them an extra $15 million per year seemed like it had just made that gap insurmountable. It was one of the biggest stories in college football that summer, which wasn't all that surprising. Texas was often the biggest story in college football.

How things have changed in such a short time.

I don’t need to recount what’s happened since that day. You all know the fairy tale story that’s transpired. Like me, you've spent months basking in the reflected glory of Kevin Sumlin, Johnny Manziel and the entire Texas A&M football program. So when the drivel about Johnny taking online courses, or wanting to transfer, or hating College Station happens, just laugh. Laugh because everybody is now so interested in Texas A&M that everything is newsworthy. Laugh because Mack Brown just missed out on another recruit, and nobody seemed to notice. Most importantly, laugh because you know that come Saturday, Aug. 31, none of this idiocy will matter.

Being under the microscope has its downsides, but it’s a hell of a lot better than being under the thumb of Mack Brown, DeLoss Dodds and the University of Texas.