We know what you're thinking... what is Johnny Manziel doing in College Station? Secondly, you're wondering what set him off to call bullshit on such a fine city. There is speculation on Twitter and message boards that the College Station Police Department broke up a party that Johnny was attending for a noise violation. Or that he received a citation for excessively tinted windows. We think this tweet gets at something deeper. 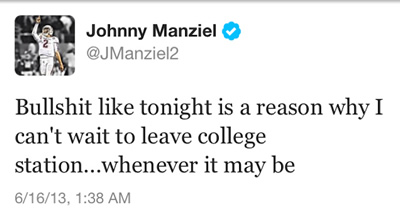 Johnny is tired of your bullshit, College Station. But there is so much bullshit that we're not sure which bullshit he's mad about. Manziel said that all of the Heisman publicity has turned him into more of a homebody, so we know he wasn't out drinking when he tweeted this. Maybe fame in a small college town has its price.

Like any reputable journalism outlet, we took to Twitter to find out what #CollegeStationBS has Johnny ready to leave town.

Campus View apartments have a view of other apartments. #CollegeStationBS

Texas A&M - under construction since 1876. #CollegeStationBS

Not enough activities for kids under two #CollegeStationBS

Chuggers at Dudley's now over $3.00 #CollegeStationBS

It could be any of the reasons above or some combination. What College Station bullshit do you think set Johnny off?