Nice cover picture, guys. Team Speed Kills previews the Aggies' opponents in the Corvallis Regional. Of course, no one would be surprised if he showed up and pitched and made a music video out of the event, so I guess all's fair. Also, if anyone's still following the softball tourney you can enter a bracket here if you are so inclined.
There will be nine. Maybe not next year, or the year after, but soon, according to Dennis Dodds. Having imposed his iron will upon his thirteen colleagues, Saban retired to his darkened hotel room to watch seasons 1-3 of "Coach" starring Craig T. Nelson on mute while listening to Dokken's Tooth and Nail on an endless loop. Or maybe he just took a nap.
And he didn't even know it was for charity. Les Miles will be rappelling off a 24-story building today to raise awareness for a good cause. What the news story does not mention is that this is part of his normal Thursday routine, followed by a game of tennis and dinner at Chuck E. Cheese's.
What dragons? So there's this new trailer going around about a Manziel dragon movie. The only problem is that THERE ARE NO DRAGONS IN THE VIDEO. If you want to see dragons, there are plenty of other things to watch that contain actual dragons: Game of Thrones, The Neverending Story, the campy cartoon version of The Hobbit... even Flight of the Conchords had a dragon. 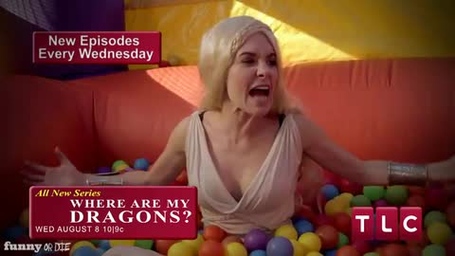