Well folks, that one hurts. The Aggies were coming off being swept last weekend by a good South Carolina team, and a struggling Auburn team coming to Olsen Field seemed like the perfect recipe to fix what ailed us. Unfortunately, the Aggies instead found themselves having to fight for a Sunday win to avoid being swept at home by the Tigers. The changes made to the rotation didn't exactly pan out as planned this weekend, although Rafael Pineda did put in a tremendous start in his return to the weekend rotation at a time when the team had to have it. There are plenty of things that went wrong this weekend, and I'll jump into those shortly, but I do want to start by encouraging you to not to jump off a cliff just yet. Let's take a look at the impact of losing this series.

What Does it Mean?

The Aggies chances at making the postseason are not dead and buried. In fact, not even remotely. A&M came into this series sitting at #24 in the RPI and found themselves just 5 spots down at #29 on Monday morning. On the other side, Auburn has given themselves something resembling hope for the season should they be able to finish with a conference record around .500. The Tigers jumped more than 30 spots after taking 2 games at Olsen, from #79 prior to Friday to #46 after the series was over.

A&M now sits with an overall record of 20-13, and an SEC mark of 6-6. The popular line of thinking before the season is that if the Aggies could finish with a conference record at or above .500 that they would have a legitimate shot at making the postseason. This is still very much achievable, but the Aggies have given themselves much less breathing room than they would probably like. Let's take a look at the remaining schedule and where those teams rank in terms of RPI.

In all honesty, the Aggies need to win every remaining Tuesday game on the schedule at this point. Splitting the 2 games with Sam Houston State might not be a killer, but beyond that there's absolutely no room for error for A&M. In terms of the remaining conference games, the Aggies have 18 games left on the schedule, with an even split between home and away games. Sweeping the 2 lowest ranked SEC teams left on the schedule, Missouri and Tennessee, may be necessary after losing that home series to Auburn. LSU is playing some scary good baseball right now, sweeping a talented Kentucky team this weekend, so winning just 1 game of that series would be OK for the Aggies.

Alabama is a bit of a question mark for me right now, as the Crimson Tide have taken care of business against the bottom tier of SEC teams - Tennessee, Auburn (ouch), and Georgia. Bama lost their last series at Arkansas and will face Ole Miss and LSU the next 2 weekends prior to welcoming A&M to town, so we'll see how they do between now and then. Arkansas appears to have gotten back on the right track after some early season stumbles, so that may be another series that A&M would do well to avoid being swept in considering it's on the road. Mississippi State makes the trip to College Station this weekend, and the Bulldogs have had to face an extremely tough conference schedule to start the season. Mississippi State sits at 5-7 in SEC play after winning a series against Florida this past weekend, so both teams will be intent on winning the series at Olsen Field.

If the Aggies win the series against Alabama, Missouri and Tennessee (6 wins) and win 1 game against each of Mississippi State, Arkansas and LSU (3 wins) that would result in a 15-15 conference record. You can see, then, the importance of taking all 3 games from the likes of Missouri and Tennessee, and possibly winning the series against Mississippi State this weekend. I feel confident in saying that finishing the season with an SEC record of 18-12 (assuming only 1 midweek loss to SHSU, at worst) would make A&M a lock for postseason play. Losing to Auburn this weekend absolutely hurts, but by no means does it spell disaster for the Aggies. Having said that...

How did the same A&M team that won a very challenging series at Ole Miss drop 2 of 3 games AT HOME to a team with just 1 SEC win coming into the weekend? It's truly puzzling, but for me the difference in the series was fundamentals. Friday night's extra-inning loss to the Tigers was the difference between the Aggies winning or losing this series. A&M took a 2-0 lead into the top of the 7th inning, with Daniel Mengden scattering just 4 hits over 6 2/3 innings of work up to that point. Mengden retired the first 2 batters in the 7th and then allowed a single into CF by Jackson Burgreen. The next batter for Auburn, catcher Blake Austin, hit a groundball up the middle that Mikey Reynolds is usually able to handle. Reynolds didn't feel like he had a shot to get the force at 2nd base so he made a throw across his body to try to get the runner at 1st. Unfortunately, the throw went wide and off the glove of a lunging Cole Lankford, allowing the inning to continue with runners on the corners. Tigers' 8-hole hitter Dan Glevenyak then smacked a 2-1 offering from Mengden into left-center. Krey Bratsen took a very poor angle at the ball - I'm assuming he misread it off the bat - which resulted in the ball sailing over his head and Auburn was able to score both runners from 1st and 3rd. In a close ballgame, fundamental plays like the ones by Reynolds and Bratsen can be the difference between a win and a loss.

Obviously there were plenty of other things that did not go well for the Aggies besides just fundamentals. A&M left 8 runners on base in Friday night's game, and failed to take advantage of numerous opportunities in the early innings to break the game open. The Aggies had a runner on 3rd with no outs in the 2nd and a runner on 2nd with 1 out in the 3rd and 5th innings but were unable to put up a single run in any of those instances. Failing to capitalize on chances like those will come back to haunt a team more often than not, and it certainly did for the Aggies on Friday.

Saturday's game was rough for the A&M pitchers, as Grayson Long and Kyle Martin both struggled mightily on the mound and the Aggies found themselves in a 9-0 hole after 3 1/2 innings. The A&M hitters were making good contact for a lot of the day on Saturday, but countless hard hit balls were finding the gloves of Auburn defenders. It was a disappointing outing for Long after pitching extremely well at South Carolina last Thursday, but he had trouble with the strike zone in the 1st and then gave up back-to-back home runs to start the 3rd. Martin entered for Long in the 3rd and promptly gave up a 2-run home run, hit a batter, allowed a runner to advance on a balk, and gave up a single. Not a good outing from KMart. 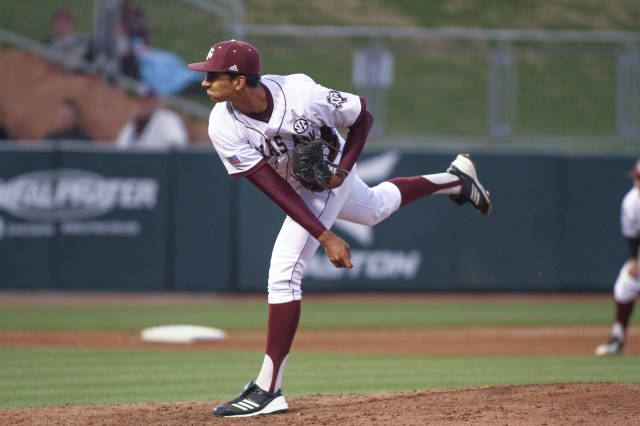 The Aggies got a very important performance from Pineda, back in the weekend rotation for the first time since having control issues, to avoid being swept by the Tigers. 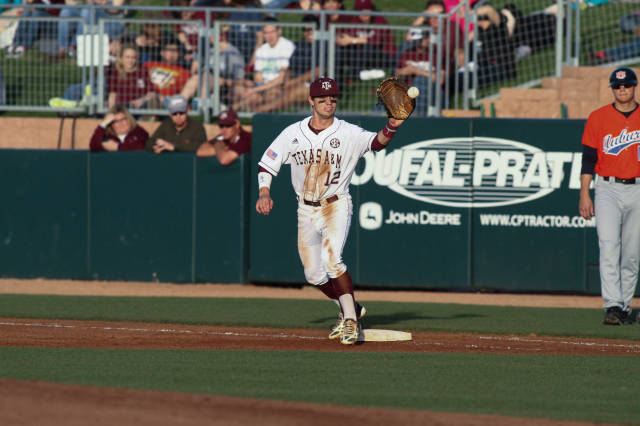 It was another nice weekend at the plate for Cole, going 7-for-14 in the series and picking up a pair of RBIs. Lankford currently leads the Aggies in doubles, RBIs, slugging percentage, and is 2nd in batting average.

The Aggies will welcome a tough Sam Houston State team to Olsen tomorrow (and will make the return trip over to Huntsville next Tuesday) before taking on Mississippi State this weekend. The Bearkats come to College Station after sweeping McNeese State this weekend and have won 8 of their last 9 games, including a pair of wins over Rice and Houston. I'll have more on Mississippi State later this week.