On April 25th two Good Bull Hunting enthusiasts decided to drink all of the booze in the house and then describe the NFL draft as it happened. If you are seeking actual information and analysis, seek elsewhere. Hypno-Toad and redfluorophore present: The NFL on Draft.

Hypno-Toad: Shunning the Outland trophy winning top SEC offensive lineman in favor of a player who made his name in the ultra-competitive MAC is why you’re the Kansas City Chiefs.

Redfluorophore: I disagree. Did you see the highlight reel of him dominating that 6’3" defensive lineman from Western Kentucky?

Current beverage: Rum and coke. The tuxedo t-shirt of cocktails.

RF: I am so sad for this kid. He has Blaine Gabbert as his quarterback.

HT: And now instead of a run at a MNC, he gets a career that’s over before it starts.

It should be noted that a clearly liquored up Joe Namath is in the same building as Suzy Kolber. This just goes to show that true love can’t be stopped by something as simple as a restraining order and a tazer.

RF: I’m not sure I like the way he spells his name. His name’s not "dee-on", it’s "die-on". As in "this kid is gonna die on the field after the Patriots have their way with the Dolphins." 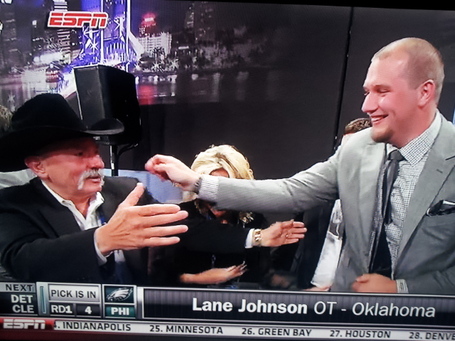 RF: I wasn’t aware that Lane Johnson was the son of a prospector.

HT: Chip Kelley is clearly hedging his bets by getting a backup QB. 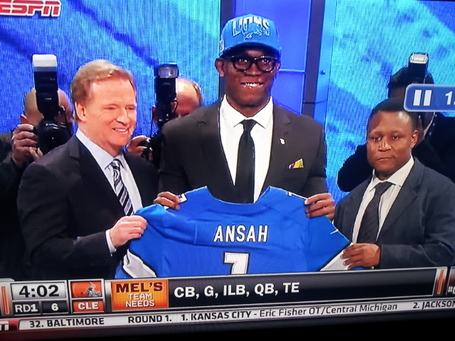 RF: Ziggy is somehow the scariest Mormon I’ve ever seen and also looks like a 6’4" Urkel.

HT: Barry Sanders has zero fucks to give about this pick.

HT: The Browns blew their load early because they were so eager to finally have a Bark for their Dawg Pound.

RF: I’ve never seen anyone smile so big when faced with the threat of living in Cleveland.

RF: I know absolutely nothing about this dude, but he looks like a massive human being and I would like him at guard.

HT: All I know is that Whoopi Goldberg would like her hair back.

RF: I was 100% on board with this pick until I realized that Tavon Austin’s mom is taller than him.

HT: Most people don’t realize that Tavon was watching the draft with his family in West Virginia and then ran to Radio City Music Hall when his name was called. 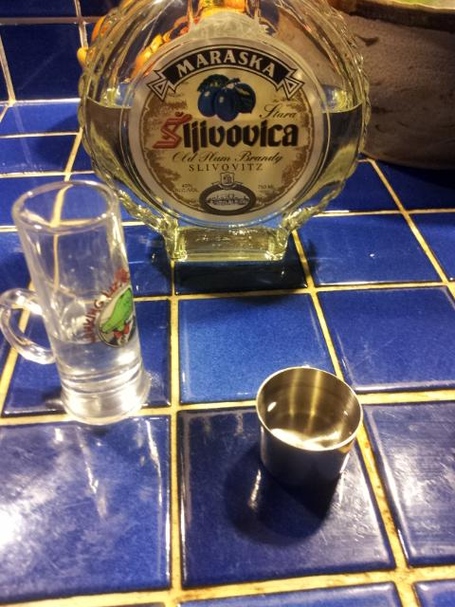 Current beverage: Time for a tiny shot in honor of a tiny receiver. Yes that is Serbian plum brandy. No you may not ask why we have that. Just imagine sitting in the middle of an active mine field and drinking distilled jet fuel while eating a plum. Ziveli!

RF: As a Texans fan I can say that Alabama CB’s are great tacklers, but not good at some of the more subtle aspects of the game like covering wide receivers.

HT: ESPN’s infographic would have me believe that the Jets just drafted Glass Joe.

"I’d still do Suzy Kolber. But then, I’d have sex with a pillow so that’s not saying much." 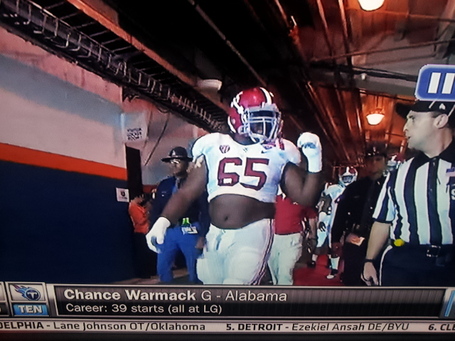 RF: They picked that fatass over two very good defensive linemen because they are afraid of J.J. Watt. I’m reveling in their dumbassery.

HT: It takes a certain figure to pull off the bare midriff look, and I think Mr. Warmack does it nicely.

RF: Apparently there is a run on Alabama fat guys.

HT: Jesus, I think that the boogey-man checks under his bed for that guy.

RF: Drafting someone who is frequently mentioned along with the phrase "medical miracle" is very noble. Stupid, but noble.

HT: ALL OF THE D.J.’S SURELY HAVE TAKEN A LESSON… I am drunk.

HT: I really don’t think the skinny white dude on Big Bang Theory has a future in the NFL.

RF: That’s a good pick. This guy gets more penetration than John Holmes.

HT: How can you argue with the organization that had the vision to draft Jimmy Clausen?

HT: The Saints just know that you can’t go wrong with that Mack-Brown-instilled work ethic.

RF: I can’t make jokes! They brought out a kid on crutches to announce the pick. Fuck texas, I’m out.

HT: Because if there’s ever a team that’s had trouble landing good linebackers, it’s the Steelers.

RF: Trading up eleven picks? Someone has a Harb-oner for this guy.

HT: Reed is a total badass in games where the referees are screwing A&M.

Nothing electrifies a drunken NFL draft watching party like a late round offensive lineman pick. On the plus side, the announcers just uttered the phrase, "We’ve officially entered Manti Te’o territory." There are two Smirnoff Ice’s in the fridge awaiting the possibility that Te’o is drafted in the first round. The Te’o price is paid with ice.

HT: In the future football will be played with 11 men in the box at all times. Linemen will reign supreme as each snap falls to the ground with no skills players to pick the ball up. This is the word of our Lord Saban.

RF: You know Howie long gets to fuck Teri Hatcher?

RF: As a Texans fan I breathe a sigh of relief because Gary Kubiak has a huge hardon for tight ends.

HT: Golden Domers and Cincinnati Bengals are a match made in heaven.

HT: Trying to figure out why there should be another Trufant in the NFL.

RF: Peeing in the bushes outside of his own house.

RF: The two best things to ever happen to Minnesota are Prince and Sharrif Floyd.

HT: The shots of Geno Smith crying backstage are really killing my buzz.

HT: Why is it that I have no problem spelling names like Barkevius, but Bjoern gave me trouble?

RF: As a Texans fan I am always OK with the Colts picking a defensive end that’s a white guy.

At this point we are merely trying to maintain enough sobriety to watch our teams – Texans and Cowboys – make their picks. We are failing.

RF: I wanted to cuddle him like he’s my own, but he is not and I am sad about that.

HT: The ratio of neck size to head size in the Packer defense is well above 1.

RF: Thank god it’s not Manti. I always wanted a player whose nickname sounded like the crowd was booing… you know, "MOOOOOOSE" or "TOOOOOOOMBS"… now the Texans have "NUUUUUUKE".

HT: I was yelling Booo-urns.

inebriation + lack of preparation = no idea what is going on

HT: If you managed to look good while playing for Tennessee this season, you’re probably pretty damn good.

RF: Did the Vikings just pick three times in the first round, or am I time travelling?

RF: As drunk as I am I still know that this is a great pick.

HT: His only downside is that he plays for the Rams. 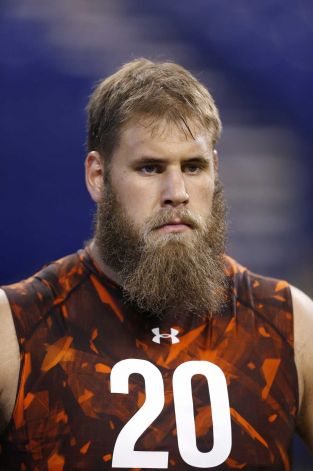 HT: Not only is this guy not Manti Te’o, he has the beard of a Norse god. I would follow this man to Valhalla.

RF: He’s the James Harden of the NFL.

RF: It turns out that when you invent a girlfriend out of thin air to convince people that you’re not gay, then lie about her, then pretend kill her off, teams don’t want you as the core of their defensive unit.

HT: I thought this guy was a kicker?

We pour out a Smirnoff Ice on the ground in memory of Lennay. Gone but not forgotten.