In case you don't keep up with Twitter at breakneck speed to stay on top of the sports world as it unfolds around you, Clay Travis over at Outkick the Coverage released a wonderful little article about a photo that was sent to him of our supreme leader Johnny Manziel. 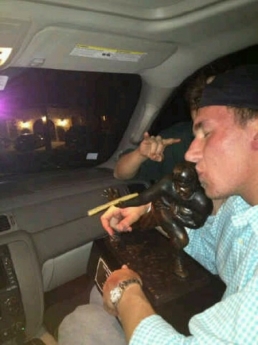 So the photo is a picture of Manziel kissing the Heisman Trophy that he earned last season as the most excellent badass in college football while Manti Te'o was on eHarmony.com and while Collin Klein was teaching grade school children in rural Kansas that girls do indeed have cooties. Of course, the photo appears to show the Heisman holding a blunt, or a french fry, or a #2 pencil with both ends chopped off. Manziel quickly replied to the questions about the photon via Twitter:

ABSOLUTELY PHOTOSHOPPED. People are always out to get me...sorry for kissing my trophy

It would be great if that was the end of it, but we all know it won't be. The article will be circulated far more than Manziel's tweet saying it is a photoshop. Between the thousands that want nothing more than to see Manziel fail and the chode Heisman purists out there that still think Tim Tebow should win the award every year, the court of public opinion will once again rear its ugly head and smite Manziel with its holier than thou hammer.

Here's all you need to know. Clay Travis made it pretty clear he wanted to get his article out on the web before any other service did. He also made it clear that he was not entirely too concerned with waiting on an official response from A&M or Manziel. Hooray journalism. There's a reason the nickname for his site is Outclick the Coverage. The guy has made a profession out of writing informed troll pieces (which is great, and I applaud him for it). There's nothing to see here folks. Just another day in the beautiful world of Texas A&M and Aggie Football being on the tip of everyone's tongue.