It's Tax Day. Let us distract you.

SUBSTITUTE TEACHER COLORADOAG IS BACK IN CLASS, GANG. PUT AWAY THOSE SPIT-WADS, STOP PASSING NOTES, AND NO SMOKING GRASS. NOW, WE'RE GOING TO WATCH A DOCUMENTARY ON SHARKS BECAUSE TEACHER IS HUNGOVER.
The Ags continue their undefeated 2013. The Maroon beat the White handily. The White was shorthanded with injuries, but the Maroon is also simply a fleet of Ferrari's built to run your ass out of the Hate Barn. Ranger offers a nice recap on the broad takeaways from an April scrimmage.
MOAR SCRIMMAGING. A nice crowd of 45,000 showed up at the Barn to take in the festivities. Kevin Sumlin seemed pleased with the overall effort as he played to the ESPN stage perfectly. Recruits described the experience as "swaggy" and "turnt up" and whatever other things they put on the Twitters.
SEC Baseball is hard. The boys of summer continued their struggles in league play after getting swept by Mississippi State. GBH's baseball correspondent, Jason Zimmermann, is likely buried under a few dozen bottles of fancy boy beer. The Ags are 1-8 in their last nine SEC games.
SAY IT AIN'T SO. I keep hearing rumblings that Fitzwilly's on Northgate is closing. This would be tragic and the current students should be ashamed at their lack of patronage to this iconic establishment built on cheap burgers and suds.
ADAM SCOTT WINS THE MASTERS. Nice finish to the tourney yesterday with a couple solid dudes in Scott and Cabrera battling it out in a playoff. Awesome photo here: 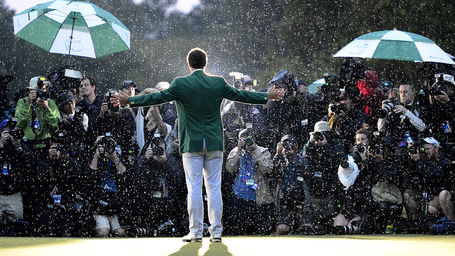 Make it a great week, everyone. Gig 'em.