After a very disappointing series loss to Auburn last weekend, the Aggies will look to bounce back against a Bulldogs team that wants badly to improve on their 5-7 SEC record.

Share All sharing options for: Aggie Baseball Squares off with Mississippi State

Last weekend's series loss to Auburn certainly was not a good one for the Aggies, but one positive about SEC play is you have a chance to turn around and make up for it against a good team. A&M will welcome Mississippi State to Olsen this weekend, and the Bulldogs will be looking to get over the .500 mark in conference play for the first time this season. This is an important series for both teams, and there are plenty of interesting things to keep an eye on this weekend.

Mississippi State is ranked anywhere from 16th to 26th depending on the poll, and the Bulldogs sit at #14 in Boyd's latest RPI predictions. The Aggies, meanwhile, are still at #24 in the RPI but this weekend provides an excellent opportunity for A&M to move up with a series win. Mississippi State absolutely cruised through their early non-conference schedule in 2013, winning their first 17 games of the season before dropping 2 out of 3 against Central Arkansas (their highest ranked non-conference weekend opponent at #47 in the RPI). Things got rough for the Bulldogs once they got to the SEC portion of their schedule, although their first 3 series losses were to LSU, Kentucky and Arkansas, all very good teams.

The Bulldogs do come to College Station with a little bit of momentum having won 4 of their last 5 games, including midweek wins over Ole Miss and South Alabama and a series win over Florida. Mississippi State has a solid lineup, led by a couple of really good hitters, and a deep and talented pitching staff. You know, kind of like most teams in the SEC.

Without further ado, let's break it down.

Pollorena, a senior from Laredo, TX, will look to build off a strong start last weekend against Florida. Pollorena went 6 innings against the Gators and earned the win, allowing 2 earned runs on 6 hits with 4 strikeouts and a pair of walks. After starting the season in the bullpen, Pollorena impressed the Mississippi State coaches enough to work his way into the weekend rotation, coupled with the struggles of previous Sunday starter Evan Mitchell. Pollorena's first SEC start was weekend before last at Arkansas, in which he allowed 4 earned runs on just 4 hits in 6 1/3 innings but struggled with control and walked 8 batters while striking out 5.

Mengden put in another strong performance in his first Friday start against Auburn last weekend, but it was not enough to earn him a decision in a game that A&M would go on to lose. Daniel threw 7 innings and allowed 2 unearned runs on 7 hits with no walks and 5 strikeouts. Mengden has the best strikeouts-to-walks ratio of any pitcher on the A&M staff at 5.25 K/BB, and I expect another good outing from the sophomore tomorrow.

Graveman will certainly look to replicate his performance against the Gators last Saturday in College Station this weekend. The senior co-captain tossed a 5-hit complete game shutout against Florida to earn the Bulldogs their first SEC series win of 2013, and issued a pair of walks to go along with a pair of strikeouts. Graveman is not necessarily an overpowering pitcher and he can struggle with control a bit at times, sporting a K/BB ratio of 2.36, but he has been very effective pitching to contact and his ERA now sits under 2. Is that an attempt at Bama Bangs there, Kendall?! 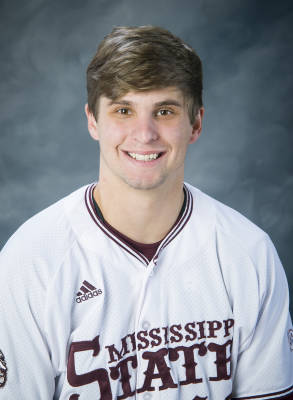 Pineda will move up a spot in the rotation after a tremendous start last Sunday against Auburn which means that this matchup will likely (or at least it should, on paper) feature a lot of balls hit in play and not a ton of strikeouts. Pineda and Graveman aren't very different pitchers at all, although Graveman has more strikeouts and more walks. Pineda went 7 1/3 innings in his last start against the Tigers and allowed just 1 earned run on 6 hits with 3 strikeouts and a walk. The Aggies will need a similar performance out of Rafi and most importantly he will have to stay in the strike zone against a Bulldogs team that is more than happy to take walks.

Mississippi State has elected to list Sunday's starter as TBD, likely pending the injury status of LHP Jacob Lindgren (2-1, 3.31, 1.02, 37 K, 8 BB). Lindgren was back in the rotation for Mississippi State last weekend after missing his previous start with some elbow issues that moved him out of his previous Friday role. Lindgren, a sophomore southpaw, cruised through the first 4 innings against the Gators before he ran into trouble in the 5th. A pair of singles started the inning and then Lindgren tweaked his leg attempting to field a bunt that would go for a single and came out of the game. He would be charged with all 3 of those earned runs, as the Bulldogs allowed Florida to put up an 8-spot in the 5th and avoid the series sweep. Lindgren features the lowest batting average against (.216) and fewest walks (8) of the Bulldogs' weekend starters but also the highest ERA. Also... Quite the picture for the Bulldog's website here, Jacob. Sad news though, a quick Twitter check tells us that Jacob got a haircut this week. Probably for the best. 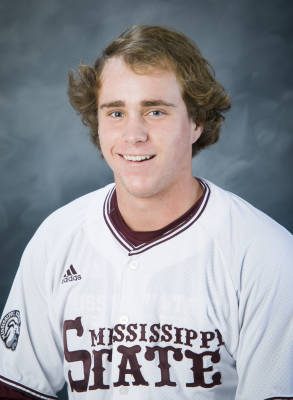 The Aggies are likely to leave this spot as To Be Determined this weekend after Grayson Long's rough outing against Auburn moved Rafael Pineda up to the Saturday spot. Long allowed 4 earned runs on 5 hits with a pair of walks in just 2 1/3 innings of work against Auburn, so Coach Childress may elect to give another opportunity to Jason Freeman. This may largely depend on how the Friday and Saturday games go - if Mengden and Pineda are able to work deep into the game, the Aggies may be able to take Sunday with more of a "Johnny Fullstaff" approach. Stay tuned for any updates on this front.

As mentioned, the Bulldogs got off to a very impressive start to 2013 before slowing down substantially once they reached SEC play. The lineup for Mississippi State has a few guys who can hit for power and quite a bit of speed (47-for-59 on stolen base attempts) as well. RF Hunter Renfroe is someone that the A&M pitchers are going to have to be very careful with this weekend, as the junior has smashed 10 HR and knocked in 38 runs on the season. Leadoff hitter SS Adam Frazier is also dangerous for the Bulldogs, although both he and Renfroe were held in check a bit by the Gators last weekend. We found a team that strikes out more than the Aggies do, and by a decent margin, but they also draw a lot more walks than A&M does as well. One other thing worth noting - opponents have attempted to steal just 29 bases against the Bulldogs, but have been successful on 21 of those attempts (72%). To the offensive stat comparisons!

Here is my best guess at the lineup that the Bulldogs will feature this weekend.

Yeah, this Hunter Renfroe dude is ridiculous. Slugging .804 with 10 HR and 38 RBI plus 8 stolen bases? Can we just walk him all weekend?

I can't seem to win in this section lately. I try to be optimistic and the team falls flat on their faces, and then I go with being negative and they make me look like a Debbie Downer. Having said that, this is a good Mississippi State team with some very talented pitching and a team that has been desperate to get back to the winning side of things. The Aggies, meanwhile, have proved that they are consistently inconsistent in 2013 and you never really know exactly what to expect.

At the end of the day, I don't like the starting pitching situation for A&M right now and I have to lean towards the depth that the Bulldogs have in that facet of the game. If the Aggies can keep Renfroe and Frazier from doing damage they may have a chance in this series, but that's no small task. Which Rafael Pineda will we see on Saturday? And we're not even sure who will be starting on Sunday.

I think this will be another series loss at home for the Aggies, and it would be a painful one because it presents a great chance to make up for last weekend's disappointment. Ultimately, I think the Aggies win either Friday or Saturday and the Bulldogs take the other 2 games. And I will cross my fingers that my inability to predict weekend series lately continues and A&M pulls it off.

It's looking like another great forecast this weekend with awesome weather for baseball, so get on out to Olsen with your parents and your shiny new Aggie ring! See y'all at Olsen and BTHO Mississippi State!