Aggie Baseball finished the weekend with a tough 7-6 loss to Houston, a strong 8-3 win over Rice and a blowout 14-2 loss at the hands of #1 North Carolina.

For the second consecutive weekend, the A&M baseball squad dropped 2 of 3 games and now sit with an 8-5 record with just 1 non-conference series remaining before beginning SEC play. The scary part of that is that the one series remaining is likely the toughest to date - the Aggies will head west to play a red-hot Cal State Fullerton team this weekend. Before that, Prairie View A&M comes to Olsen today for a midweek game that the Aggies will be fully expected to win. Let's take a look at what went right and what went wrong from the weekend at Minute Maid.

There is still a lot of work that needs to be done in a pretty short period of time to get the offense to where it needs to be, but there were at least some signs of progress this weekend. After scoring just 7 runs in 3 games against Pepperdine last weekend, the Aggies more than doubled that total in Houston by putting up 16 runs against the Cougars, Owls and Tar Heels. A&M tallied an impressive 23 hits in their first 2 games of the tournament - 12 in a loss to the Cougars and 11 in the victory over Rice.

We'll talk about the part of the offense that still has to improve in a second, but there were a number of hard-hit balls by the Aggie hitters this weekend, including 6 extra-base hits against Houston on Friday. This was something we talked about that the Aggies were going to have to do a better job of, and there was certainly improvement in that area this weekend. It was also nice to see the Aggies break their 2013 home run drought, with freshman Jonathan Moroney sending an absolute bomb to the top of the Crawford Boxes on Friday.

The first 4 hitters in the A&M lineup (Reynolds, Bratsen, Mengden, Moroney) are hitting a combined .377 at this point in the 2013 season and have accounted for over 60% of the team's runs batted in with 32. There is not a whole lot more that you can ask of those guys to do, as the rest of the Aggie hitters are really going to have to step up and start getting on base and driving in runs.

If I had told you that our offense would crank out 23 hits and 14 runs over the first 2 games at Minute Maid, you would probably think that we would be 2-0 going into Sunday, right? What went wrong? Well...

Big innings for the opposing team were the Achilles heel for the Aggies this weekend. A 5-run fifth inning for Houston on Friday proved to be too much for A&M to overcome, a 3-run fourth inning for Rice on Saturday cut the Aggies' lead in half at the time, and 12 runs in 3 innings for UNC on Sunday put that game out of reach early. The starting pitching had been a bright spot for A&M in the early parts of the 2013 season, but Kyle Martin seemed to hit a wall in the 5th on Friday and Rafael Pineda... Let's just say that Pineda didn't have a good day.

The Cougars hitters did a decent job of making Kyle work and throw more pitches on Friday, which may have contributed to the rough 5th inning. That inning started with a UH home run to RF, and KMart was never able to settle down after that. Houston would then get a pair of singles, followed by a sac bunt that Martin was not able to throw out the runner going to 3rd base, and then a 2-run single up the middle that would end the night for KMart. Matt Kent entered the game with minimal warm-up time and promptly allow another 2-run single, with both runs still credited to Martin, that would prove to be the difference in the game.

I'm not sure that I have sufficient words to describe what we witnessed on Sunday, but let's just go with bad. Rafael Pineda was pulled from the game without recording a single out after throwing 16 balls out of 17 pitches. 3 Tar Heel runs were credited to Rafi, 4 went to Matt Kent, and 5 went to Corey Ray. The Aggies put up a run in each of the 1st and 2nd innings, but that isn't very useful when UNC scores 12 in 3 innings.

Even Daniel Mengden, who pitched well in earning the Aggies their lone win of the weekend, had trouble with allowing a lopsided inning. After walking a batter and hitting another in the 4th inning on Saturday, Mengden allowed a 3-run blast by Rice's primary power hitter Michael Aquino that cut the A&M lead in half. Fortunately, Daniel recovered well and did not allow the Owls to score again through the next 4 innings.

It would be very easy to just put the entire Sunday loss to UNC in this section, but getting blown out by the top-ranked team in the country when your starting pitcher throws 17 pitches and only 1 strike is fairly par for the course. However, I feel comfortable putting the pitching performances from that game in the "blip on the radar" category. I do not expect that we will see a game like that again anytime soon for A&M. What I am still significantly more concerned with is the Aggies' propensity for leaving runners on base.

In the 2 losses for A&M this weekend, the Aggies stranded a total of 22 runners on base - 9 against the Cougars and 13 against the Tar Heels. Not surprisingly, there were just 3 Aggie runners left on in the A&M win over Rice on Saturday. I said going into the weekend that I would have been happy with 2 wins in 3 games, and the Aggies' inability to bring guys home once they get on base.

If you want a prime example of the Aggies struggles with runners on base, and in particular runners in scoring position, look no further than the 6th inning against UH on Friday. Troy Stein singled to start the inning and Blake Allemand followed that with a fielders choice which was misplayed by the Cougars, with an E6 allowing Stein to advance to 3rd base. The Aggies had runners on the corners with no outs and were trailing 7-5 at the time - a perfect start for a potential rally inning. Instead, Blake Allemand gets picked off at 1st base, Logan Taylor grounds out to 3rd which keeps Stein from scoring, and Charlie Curl flied out to left field. Let me state that one more time, just for emphasis - the Aggies put runners on the corners with no one out, and were unable to get a single run home in a game that they would lose by 1 run. Brutal. 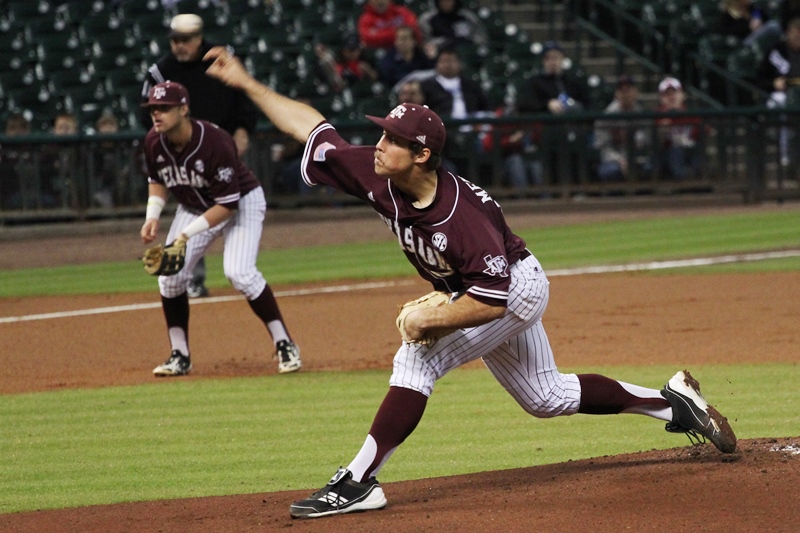 It's the second consecutive Pitcher of the Weekend award for Mengden, who survived a rocky 4th inning to go 8 solid innings and earn his 3rd win of 2013. 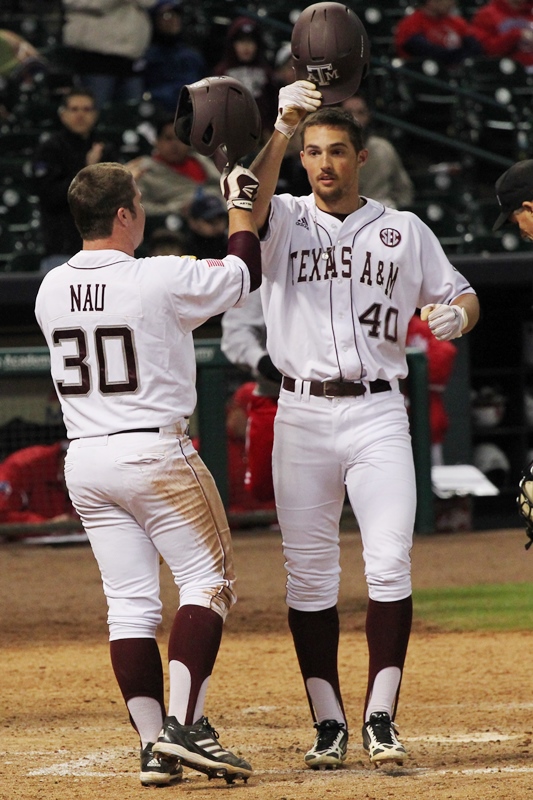 What a weekend it was for true freshman Jonathan Moroney, who is from the Houston area. Moroney brought home the Aggies' first SEC honors of the season, being named the SEC Freshman of the Week after hitting a bomb into the Crawford Boxes for the first long ball of the season for the Aggies.

The Aggies will welcome Prairie View A&M to Olsen today for a 6:35pm midweek game, with freshman Grayson Long getting the start. The Panthers, who feature a 7-6 record so far in 2013, will go with midweek starter Stephen Lunsford (0-1, 4.26, 6 K, 1 BB). Prairie View is hitting just .227 as a team, and their best starter with more than 5 at-bats is hitting only .270, so I would hope that this will be a comfortable victory for A&M.

The Aggies will head west to California next weekend for another major test as they will take on red-hot Cal State Fullerton in a 3-game series. The Titans are ranked 8th, 10th, and 12th in the 3 major polls and have lost just one game so far in 2013, a 9-1 game to Oregon last Sunday. Fullerton has swept TCU and won a midweek game from Pepperdine, so I'll have a full preview here later this week.