It’s the worst season of the year – the offseason. That means passing the time with stories and fables. I fancy this tale to be one of the greats. Today we talk about a burgh that was the second largest city in the State of Texas. For a day. Join me in Crush, Texas.

Share All sharing options for: Offseason Story Time: the Crash at Crush

1. I'm not from Texas. For you Texans out there, I know your educational upbringing valued state history (REMEMBER THE ALAMO AND TEXMEX) more than say, arithmetic and grammar. If you've heard of Crush, Texas, you can stop reading. I'm a Colorado kid wildly fascinated by this. 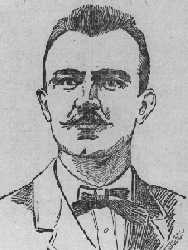 3. Will Crush is a helluva Texan name and Texans have some crazy, fun (surprisingly lucrative) ingenuity. Mr. Crush thought a good way to generate some buzz around The Katy was to devise a monster train crash with two of the company's old locomotives. What could go wrong?

4. The scene was some rails situated by a hill north of Waco near the town of West (kolaches FTW). The date of the event was to be September 15, 1896. Texas A&M was in their third season of football as a university. That season consisted of three games. Two were against high schools and the Fighting Texas Aggies finished 2-0-1 (Under my watch that National Championship is going up on the Hate Barn). Anyway, that's some serious FCS scheduling and a ton of bye weeks.

5. September in most states is a delight. It feels and smells like fall. The temperature is right. In Texas, September is just a scant three months from "fall" or "brownish" or "Christmas". Texas in 1896 must have been hell. No air conditioning. Three game seasons of this new game called football. I don't know how anyone survived. Point is, those that did survive needed some distraction and entertainment.

6. Marketing in 1896. Willie Crush rode the rails all over Texas the months leading up to his event "The Crash at Crush". Promotion was key, and the goal was just to get attention on the fledging railroad. Customers were able to get slashed train tickets for $2 from all over Texas to attend the spectacle.

7. Just so we're clear. The idea of this was to have two 35 ton locomotives with six cars each go head-on into each other for the amusement of humans. Texas has changed over the past century, but this sort of behavior is at the state's core.

8. Nearly 50,000 people showed up (more than nearly any Baylor football game ever [tarp not included]) for the event making Crush, Texas the second largest city in the state at the time. It was a field. Tents were borrowed from the Ringling Brothers and a grandstand was erected on the hillside. There were actual concessions. As the masses came in droves, families and friends set up picnics near the tracks. In surprisingly responsible fashion, William George Crush hired 300 policemen to control the situation. The police urged people to move as far away as possible from the train tracks.

9. Texans really don't like being told what to do (see: crazy secessionists, speed limits, and shoddy open container law obedience). People gathered as close as they felt safe to watch destruction of one of the pillars of industry in their lifetime. We modern day idiots watch meltdowns in reality TV and silly confessions with Oprah and Katie. 1896 Texans needed destruction.

10. William Crush actually had the two trains come together at a "midfield" of sorts for a handshake before the most brutal jousting session ever. Then, the trains backed up a few thousand feet (records are kind of shabby, should have mentioned that earlier), and took their position. At the wave of Crush's hat, the two trains started their motion into collision. Both trains were driven by two engineers who were presumably high on peyote and awesomeness. Said engineers were instructed to bail 100 feet before the collision - tuck-n-roll style like Bad Boys II.

11. I hope you're sitting down. A problem occurred. While both trains were barreling towards each other, the boiler on one of the locomotives exploded. The trains continued on toward one another reaching a speed of 45 miles per hour each. Again, each load weighing 35 tons.

12. CRASH. It happened. And boy was it horrific and beautiful. The fans and picnickers were treated to a triumphant explosion and massive shards of gritty American steel falling from hundreds of feet from the sky on top of them. 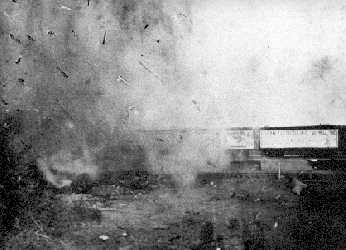 13. CARNAGE. Three people died. Dozens were injured. The official photographer lost an eye from a rogue, flying bolt. After the crash, the unscathed quickly went scavenging for "souvenirs" aka chunks of metal from these locomotive behemoths.

14. MORE CARNAGE. William George Crash was promptly fired for this unruly event that caused much damage.

15. Forgiveness. The public support despite the horrible outcome for Will Crush was massive. The Katy was the talk of the state and everyone loved Crush. The railroad rehired him the next day. Will Crash worked for The Katy for 57 years.

16. There are no William George Crush's in the Midwest or in most places, frankly. It takes a certain type of crazy brilliance to not only dream a massive train crash, but to execute and turn it into a family affair. This is why I love Texas and its batshit identity.

17. Billy Joe Shaver may or may not have been the person who first told me about this story. I assure you that the tale is true. Please leave your commentary and book reports in the comments.