Wishing you the finest of Mondays.

Minute Maid Rollercoaster. The baseball team played in the Astros Foundation College Classic over the weekend. They lost 7-6 to Houston in the opener on Friday, then went on to pummel #12 Rice on Saturday 8-3. Unfortunately, they would come up a little bit short against #1 UNC yesterday.

DUNKS. Coach Kennedy figured out a new winning gameplan: let Elston Turner go wild and score a bunch of points and let Ray Turner dunk the ball a lot. It worked quite well against South Carolina on Saturday, as the Ags cruised to the 74-56 victory at Reed. There were several, but this one got the most attention:

Ouch. The women lost 67-52 to LSU at Reed yesterday. They'll enter the SEC tourney over the weekend on a three-game losing skid.

#YESSIR. Coach Sumlin gave his Twitter followers chillz over the weekend when he tweeted this out three times in a row. With good cause, too. Turns out we landed three of the best recruits in the state. Coach Snyder in particular must be extremely pleased with this news. That's #7, #20, and #38 out of our top 50 recruits in Texas.

Feelin' it. Spring practice has sprung, and it must be nice for Manziel to finally get back onto the field after his wild ride. Looks like he's making the most of it:

At one point between drills led by new quarterbacks coach Jake Spavital, Manziel reached over and gave freshman walk-on quarterback Conner McQueen a good, swift "noogie" to his uncovered noggin. McQueen ducked away from the hard knuckle rub, then patted Manziel on the helmet in return. 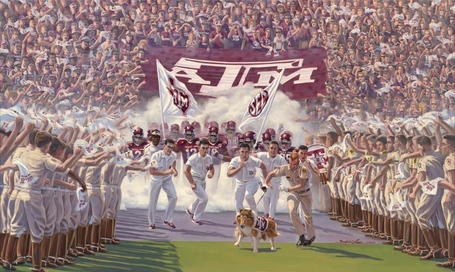 SCARIEST DAMN COACH IN THE SEC: 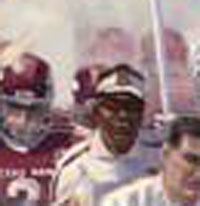