After dropping the Friday game by an 8-2 margin and having Saturday's game postponed, the Aggies bounced back with a pair of huge Sunday wins to sweep the doubleheader and win their first-ever SEC road series.

Stop me if you've heard this story before - A&M goes on the road for a big game (er, series) in Oxford and falls behind early by a large margin. After slowly chipping away at the lead, the Aggies mount a furious comeback to shock the Rebels. Ole Miss fans run out of expletives to describe how much they don't like Texas A&M.

Obviously there are plenty of differences between Johnny Football and the Aggies' win against the Rebels back in October and the victory that the Aggie Baseball team just secured, but the end result was ultimately the same. It's too early to say whether the win in Oxford will have the same sort of effect on the season that the football team's win did, but this was certainly a massive road series victory for the Aggies especially after their struggles early this season.

Want an idea of just how huge this series win could be for A&M? The Aggies sat at #41 in Boyd's RPI rankings going into the weekend but as of this morning have jumped all the way up to #18. That is exactly how you make up for struggling to start the season and put yourself right back in the conversation for hosting a regional. Obviously there is still a ton of baseball still to be played, but with the schedule that the Aggies will play there are plenty of opportunities for more of these sorts of wins.

The Aggies did not start the series in Oxford the way they would have liked to, as Ole Miss' ace Bobby Wahl turned in an excellent performance to take Game 1 of the series. Wahl held the Aggies to just 2 runs (1 earned) on 7 hits through 8 innings while striking out 9. More importantly, we talked in the series preview about Wahl's only issue this season being command issues at times but he did not walk a single batter in Friday's contest. It is easy to see why many scouts expect Wahl to be selected in the 1st round of the upcoming MLB Draft.

On the other side, Kyle Martin cruised through the Rebels' lineup the first time through, allowing just 1 hit in the first 3 innings, but things got out of hand quickly for KMart in the 4th and 5th innings. Martin hit a batter to start the 4th inning but after erasing him on a double play promptly hit another batter and then allowed a pair of doubles to give Ole Miss a 2-0 lead. The Rebels would break it open by adding 4 runs in the 5th after 4 straight singles to start the inning. Although the 5 A&M pitchers who saw action in this one only issued 1 walk combined, they hit 5 batters between them which is something that must be cleaned up moving forward.

Inclement weather in the Oxford area on Saturday forced the Rebels to postpone Game 2 of the series and per SEC rules Games 2 and 3 would be played in a Sunday doubleheader, with both games only being 7 innings. I was a little concerned initially with how this would affect the Aggies' ability to score runs against the Ole Miss starters, but in retrospect the bad weather may have ultimately benefited A&M. Daniel Mengden continues to have a very strong sophomore season on the mound, holding the Rebels hitless through 3 innings and finishing this one with just 1 run allowed on 6 hits through 5 2/3 innings. The 7 inning game allowed the Aggies to turn to Jason Jester in the 6th clinging to a 2-1 lead. Jester was terrific again for A&M, closing the door on the Rebels by not allowing a single base runner and striking out 1.

Mike Mayers did not quite have his best stuff on the mound for the Rebels, walking 3 batters and allowing 2 runs on 5 hits in 6 innings of work. The Aggies put a run on the board in the 1st inning and could have done more damage, leaving the bases loaded when Troy Stein struck out looking. The game-winner for the Aggies would come on Mitchell Nau's second homerun of the season in the 3rd inning, as Mengden and Jester would combine to hold the Rebels to just 1 run in the game.

This one has to go down as the best win of the season so far for A&M- not just because it clinched a series win over a Top-10 opponent on the road, but because of the way the Aggies won the game. The Aggies fell behind 5-0 after 1 inning of play, and starter Jason Freeman lasted just 4 batters before being pulled by Coach Childress in the 1st inning. If I had told you just those 2 things without knowing the result, you likely would have assumed that the game went like the Aggies' Sunday losses to North Carolina and Cal State Fullerton. How easy would it have been for the guys to just chalk it up as one of those games where things don't go your way, go through the motions, and hop on the plane back to Texas? NO SIR. These boys may not be the most talented bunch that we've seen on an Aggie Baseball roster, but they sure as hell have a lot of fight in 'em.

The Aggies got 2 runs back in the 2nd inning thanks to a double by Cole Lankford, a triple by Troy Stein and a squeeze bunt by Brandon Wood. Both teams were held scoreless through the 3rd and 4th innings before A&M chased the Rebels' starter and best reliever in the 5th and tied the game at 5. Mikey Reynolds picked up an RBI single with the bases loaded, Krey Bratsen drove in a run with a sacrifice fly, and Coach Childress would call for another squeeze bunt - this time with Blake Allemand - that would bring the Aggies back level with Ole Miss. A&M would then break this one open in the 6th inning with 4 runs on singles by Lankford and Stein and a double by Brandon Wood combined with a pair of walks and fielders choices. Another single by Stein and double by Wood in the top of the 7th would add one more insurance run that ultimately wasn't needed, with the Aggies prevailing by a 10-6 final score.

I would be remiss if I didn't mention the terrific work by reliever Matt Kent, who tossed 5 scoreless innings to keep the Aggies in the game by preventing Ole Miss from responding to the A&M comeback. Kent allowed just 3 hits and 1 walk to go with 3 strikeouts and earned his second win of the season.

The Aggies were able to put double digit runs on the scoreboard for the second straight Sunday, and this time it was in comeback fashion to make up for some early pitching issues. Let's take a look at how our guys did at the plate this weekend (not entirely in order):

Mikey Reynolds was held hitless in Game 1 of the Sunday doubleheader which brought his 22-game hit streak to an unfortunate end. Reynolds was hit by a pitch and intentionally walked in the game, although he did score the game's first run. Krey Bratsen had a strong weekend at the plate, bringing his average up to .262 on the season, which could be a very promising development for the Aggies should he be able to continue to hit well.

The most impressive performances of the weekend came from a pair of unlikely candidates - Troy Stein and Brandon Wood. Stein has struggled to round into the form at the plate that he showcased last season, but stepped up in a big way on Sunday by going a perfect 3-for-3 and scoring 4 of the Aggies' 10 runs. Meanwhile, Brandon Wood was handed the start in RF on Sunday in place of Jace Statum, who struggled at the plate against the Rebels in the first 2 games. Wood did not have a single hit on the season coming into Sunday, but had a breakout day at the plate by going 3-for-3 with 2 runs and 3 RBI and coming up huge in key situations.

One guy who is really struggling at the plate right now after starting the season strong is Jonathan Moroney, who has gone 4-for-28 the past 3 weekends combined. As mentioned, Jace Statum had a rough weekend as well but he had been hitting well as of late so I'm going to chalk that one up to just having an off series against mostly good Ole Miss pitching. 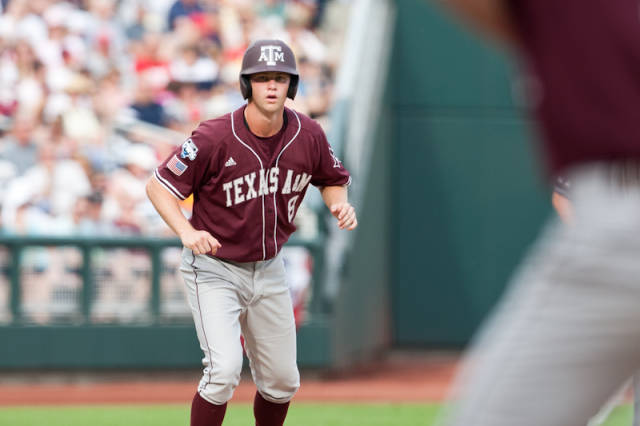 It probably seems strange to hand this to a guy who only played in 1 game this weekend, but breaking out of an 0-for-2013 slump with 3 hits and 3 runs batted in earns Wood POW honors in this case. With Moroney struggling at the plate right now, Wood may have earned himself a shot at winning back his starting spot in LF. 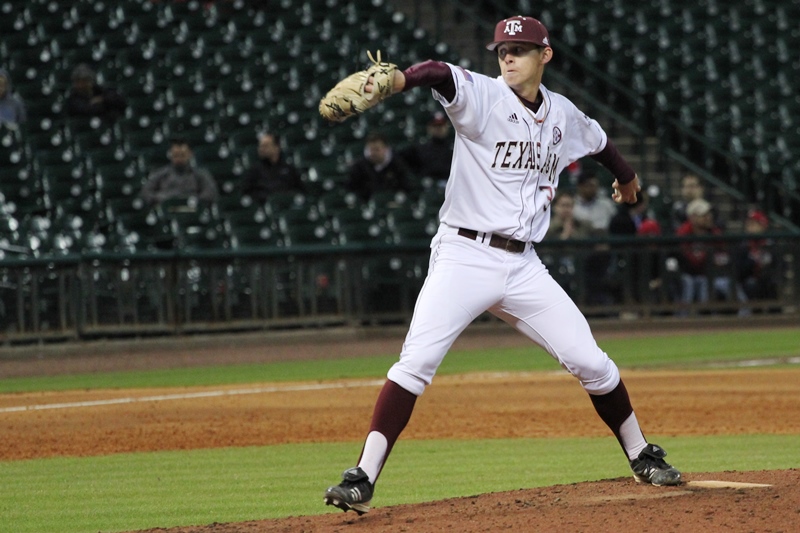 An obvious tip of the cap to Daniel Mengden for another very strong start, but we're at the point where I expect strong starts from Mengden and he's going to have to really throw a gem to find himself back in this spot. Instead, Matt Kent basically saved the day for the Aggies on Sunday and was a huge part of A&M's comeback to take the series in Oxford. Fittingly, Kent also picked up SEC Freshman of the Week honors from the conference - and I'll have you know that was released AFTER I awarded him my Pitcher of the Weekend honors.

The Aggies will take on UT-Arlington, who sits just outside the RPI Top 100 with a 12-11 record, at Olsen Field on Tuesday before embarking on another very difficult road trip to South Carolina next weekend. The Gamecocks will be looking to bounce back after a brutal home sweep at the hands of the visiting Arkansas Razorbacks this past weekend. South Carolina entered the weekend with the #6 RPI in the country, but found themselves all the way down at #26 after dropping 3 straight at home. Check back here for a full preview later this week!