I love March Madness because, for me, basketball is a single serving sport. I don’t follow the teams, I don’t track records and standings, and I don’t care which coaches are on the hot seat. But I can sit down and watch a single game as a finite entity and thoroughly enjoy it. In fact, not having all that other emotional baggage is something of a relief, really. It allows me to fully invest at any given moment, thrilling at a buzzer-beating victory by a team I’ve never heard of over a team that I thought was a trade school.

Football is an epic tale for me, like the Song of Ice and Fire books. It’s long, spans multiple seasons and years and volumes, and in the Longhorn athletic department it may involve a lot of nausea-inducing sexual situations. I am deeply emotionally involved in every political move, every intricate character, and every victory no matter how small. When something bad happens to one of the good guys (George R. R. Martin and Dennis Franchione are sadistic sons of a bitches), it totally ruins my week.

Basketball, on the other hand, is like a magazine. I can just pick one up and start reading. I don’t need context, nor do I want it; I just enjoy to my heart’s content and then walk away. I don’t even need to finish the article. Sometimes that’s all I’m looking for out of my reading.

March Madness is on the same level as the Olympics for me. When that torch gets lit and the national anthems start playing, we deeply enjoy and care about every event and every minute of it. But once the games are over, that’s it. No one follows the competitive swimming circuit, or checks the standings in the water polo leagues, or can even name one pole vaulter. It takes a multiple gold medal winner pulling bong rips on Twitter or a double-amputee domestic violence homicide trifecta for us to even think of those athletes outside of every fourth summer.

Note: This is the true definition of amateurism. If I don’t give a shit what’s going on in your league or sport for 95% of the time, then you sir are a true amateur. Now move along, there’s real sports on TV. See you in 2016.

But how, you ask, do I make my picks and fill out my bracket with absolutely no context? Well, I’m an engineer, so it’s a rigorous and scientific process involving pre-existing bias, gut feelings, bourbon, and an unreasonable amount of upsets. I’ve provided a helpful flowchart for the clockwork machinations of my mind as I create the perfect bracket. Hopefully it will find its way to others out there who also would like to participate in the madness, but just plain don’t give a fuck about basketball for 11 months of the year. 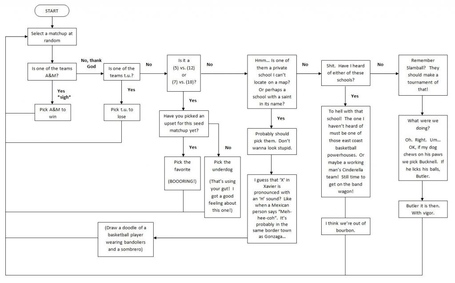 This is not too far from my actual honest-to-God thought process. Follow this to the letter and I'd bet that our first round picks look nearly identical. To get the rest of the picks close to mine, you'd need to add in a few other prejudices I have rattling around in my head - including but not limited to:

WAY TO GO, NON-BASKETBALL FAN SEC FAN WHO DIDN'T GO TO KENTUCKY! You now have a bracket you can be proud of until at least tip-off of the first game. Make sure to print your bracket out to show your friends. For an extra time saver try pre-crumpling the paper. That will make it easier to throw to the ground in frustration early in the second day of the tournament. Your bracket is bad and you should feel bad. 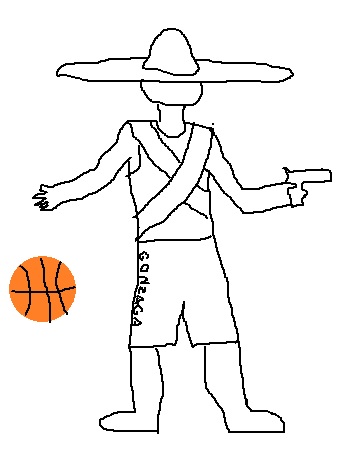 
FanPosts are user-submitted, and are not always representative of GBH editorial/staff or any of our opinions. Please don't post spam or self-promotion, because that's not very good bull. Thanks!