LAST CHANCE. The NCAA Basketballing Tournament tips off this afternoon, so make your picks with us if you are so inclined. Below are the groups that DerekAggie06 has created:

Gig 'Em, Von. Von Miller is currently on a USO tour, visiting troops in Kyrgyzstan. 10/10 on the just-now-created GBH Good Bull Meter (can we get a graphic from someone please/thanks).

Top 10 game. Lost in the flurry of basketball this weekend, the softball team (ranked #4) will travel to Knoxville to take on the #8 Vols. Details on Aggie Athletics.

Bama's AD is retiring. Mal Moore is stepping down after 14 years with a pretty decent track record, you could say. No pressure, person chosen to replace him.

Football Countdown. Jon Cooper over at Saturday Down South has JaQuay Williams at #3 in his list of the top 25 SEC football newcomers in 2013.

Random Countdown. For all the Game of Thrones fans out there, there are only 7 weekdays left before the season 3 premiere. As such, I will count down my arbitrarily favorite 7 characters between now and then. I'll do my best to avoid spoilers.

Coming in at #7 is Robert Baratheon. He's a terrible king and an even worse husband. But beneath all his shortcomings is just a fun-loving soul who used to be a bad-ass soldier. Pretty decent beard, too. 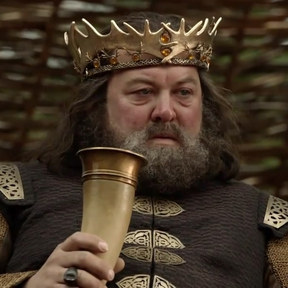