For the first time in 2013, Texas Aggie Baseball picked up a series sweep by taking all 3 games from the visiting Georgia Bulldogs in the first SEC series for Texas A&M.

There were abundant question marks for Texas Aggie baseball as they headed into their first-ever SEC series against Georgia, but for the time being it appears that at least some of those have been answered. The Aggies showed the ability to win in a number of different ways this weekend - taking the opener against Georgia's best pitcher, winning an extra-inning game in which the bats went mostly cold, and then exploding for 11 runs against the Bulldogs' Sunday pitchers. Let's be clear on one thing, though - Georgia is not a good baseball team. That is not meant to downplay what the Aggies did this weekend or to be a Negative Nancy, but that's the reality of it. We will find out very quickly if A&M can translate this weekend's success against a pair of Top 10 teams - Ole Miss and South Carolina - on the road in the next 2 weekends. In the meantime, though, we can certainly enjoy what was an excellent result for the Aggies.

The weekend started with a strong performance by Kyle Martin who earned the first-ever SEC win for Texas A&M and evened his season record at 2-2. Martin threw 6 1/3 innings and allowed just 1 earned run to the Bulldogs on 7 hits while walking 2 and striking out 6. Georgia got a nice performance from their Friday starter as well, as Sean McLaughlin tossed 7 innings and gave up 2 earned runs, but the Bulldogs were unable to muster enough runs to support his outing (it's nice to be on the other side of that statement, isn't it?).

No Aggie hitter had more than 1 hit on the night, but the Aggies got runs in each of the first 2 innings and then 2 insurance runs in the 8th to make the 9th inning a comfortable one for Jason Jester to close out and earn his 5th save. Blake Allemand, Mitchell Nau and Jace Statum each knocked in a run for A&M in this one, and Statum had an impressive 0 at-bats on the final stat sheet (2 sacrifice bunts and a walk).

Daniel Mengden continues to be outstanding on the hill for the Aggies this season, but unfortunately the Aggies continue to struggle to back up his performances with the run support needed to earn him the wins he deserves. Both teams' hitters had trouble figuring out the opposing starting pitchers, as the Bulldogs struck out 8 times against Mengden and the Aggies struck out 10 times against Georgia's left-handed starter Patrick Boling. The two teams combined for 13 hits through 9 innings before A&M walked off in the 10th. Blake Allemand and Mikey Reynolds were the only Aggies with more than 1 hit in this one, and Allemand had A&M's other RBI with a 2-out single in the 3rd. Jason Jester earned his 2nd win in 3 games by working the 9th and 10th innings and allowing just 1 Georgia hitter to reach base.

It was nice to see some Olsen Magic for the second time in 3 games, and it was again Krey Bratsen who won this one for the Aggies. Jace Statum started the 10th inning with a walk, and was moved to 2nd by a Mikey Reynolds bunt. Bratsen had been hitless for the day up until this point, but stepped up and delivered the game-winning hit that easily scored Statum from 2nd.

Luke Crumley, the Sunday starter for Georgia, came into the weekend with an ERA close to 7. Crumley was pulled after just 2 innings against the Aggies with his ERA now close to 9. As expected, Rafael Pineda was not on the mound for the Aggies but rather Jason Freeman who earned the start. Freeman recorded the first out of the game on the first pitch, but then got himself in trouble by allowing a pair of Georgia singles. Freeman got the inning's second out but Mikey Reynolds was then unable to field a tough groundball and was charged with an error which loaded the bases for the Bulldogs. Georgia cashed in with a 2-run single to go up 2-0, but that was the last time they would hold a lead in this one.

The Aggies' bats came to life immediately, with Krey Bratsen getting a 1-out single and stealing 2nd before Blake Allemand smashed a 2-1 pitch over the right field bullpen to even the game at 2. After Mitchell Nau grounded out, Cole Lankford made it 2 home runs in the inning with a shot that was helped a bit by the wind blowing out at Olsen. The Aggies continued to extend the lead in the 2nd and 3rd innings, and then broke it open with 3 runs in the 6th. Freeman finished 1 out short of qualifying for the win but still pitched well, going 4 2/3 innings and allowing just 2 earned runs on 6 hits. Matt Kent and Andrew Vinson finished the game for the Aggies on the mound, with Georgia's only other runs coming on a 2-run HR off Vinson in the 8th.

We got a glimpse this weekend, particularly on Sunday, of the potential that this A&M lineup has if they can put everything together. Let's take a look at how our guys did at the plate this weekend (not entirely in order):

Obviously Mikey Reynolds continues to play out of his mind, but Krey Bratsen, Blake Allemand and Cole Lankford all had nice weekends at the plate for the Aggies. In particular, it is nice to see Allemand hitting the ball well after really struggling to start the season. Blake had been hitless through a number of games to start the season but had done an excellent job of still getting on base, so if he can continue to turn the corner offensively that will be a big boost for the A&M lineup. I was also impressed with Jace Statum doing a tremendous job of turning the lineup over and getting on base to allow the guys at the top of the lineup to drive him in.

Jason Jester has been huge for the Aggies as well, shutting down the Bulldogs both Friday and Saturday and helping A&M clinch the series going into Sunday. Try not to do what I caught myself doing this weekend and asking the "What If?" question for if Jester had been available for the Aggies last season and just enjoy how well he's pitching out there this year.

The Aggies came into the weekend with their RPI rating sitting at #75, but moved up nicely to #48 this morning after taking all 3 games from the Bulldogs. The next 2 weekend opponents for A&M (Ole Miss and South Carolina) sit at #8 and #6 in the RPI respectively, so the Aggies will have some opportunities to really boost their resume and pick up some huge road victories.

What's the Deal with Superman?

Glad you asked, and I'll be glad to explain. Georgia's 2nd baseman and leadoff hitter Nelson Ward came to College Station hitting .400 on the season and had been one of the better hitters for the Bulldogs. Hitless through his first 3 at-bats on Friday, Ward came to the plate with 1 out and the bases empty in the 7th inning and hit a double into right center field. Nelson popped up and for some reason decided to do the Cam Newton/Johnny Football Superman move (you know, this one). Well, let's just say that was plenty of ammunition for Aggie fans.

Nelson was mocked and heckled pretty relentlessly by everyone from Section 203 to Section 205 and even down below in the 100 sections throughout the rest of the weekend. The Olsen PA announcer even joined in the fun, playing a Superman "walk up" song for his second at-bat on Saturday and conveniently playing Kryptonite by 3 Doors Down after the A&M win on Sunday. The 7th inning double on Friday would be his only hit at Olsen, going 1-for-13 on the weekend with 3 strikeouts, and he was pulled from the game on Sunday before his final at-bat.

Even though heckling is one of the better parts of the Olsen Field experience, it still is a treat to see the Aggie faithful truly get in the head of an opposing player and affect his play on the field. Maybe don't do the Superman move on a routine double next time, Nelson. 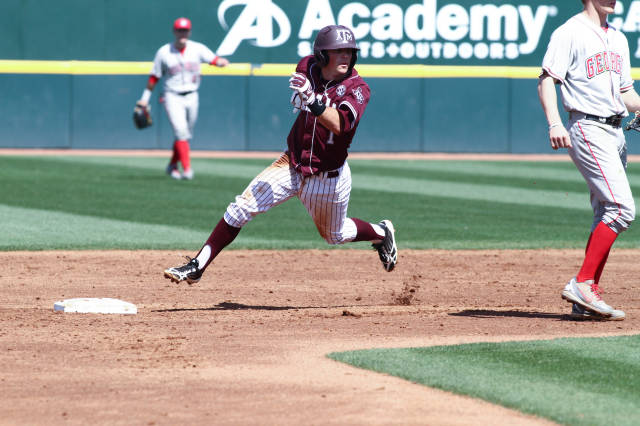 This really could have gone in any number of directions (Reynolds, Lankford, Statum) but I'll give Blake the nod for fighting through the early season struggles and getting the bat going. Keep it up. 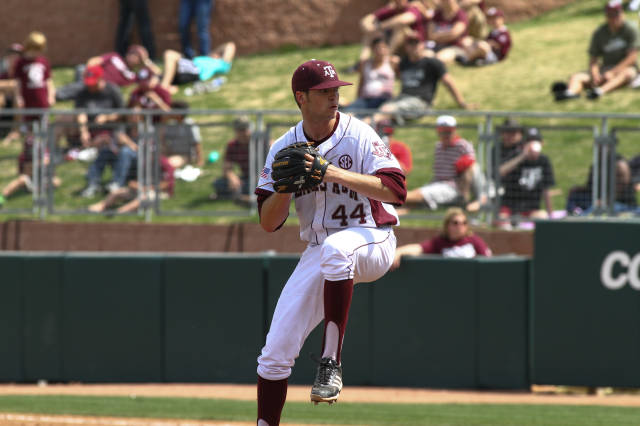 While the likes of Mengden and Jester may have been more impressive on the mound this weekend for the Aggies, I'm not sure there was a more important performance than the one Freeman gave. After the recent Sunday issues that have plagued A&M, Freeman pitched well in a career-high 4 2/3 innings and led A&M to a much-needed sweep.

The Aggies will take on Dallas Baptist, who has been quite inconsistent in 2013 and sits with a record of 11-9, on Tuesday at Olsen before embarking on their first-ever SEC road trip. The Aggies will head to Oxford this weekend to square off with Ole Miss, who is coming off a road series win at Arkansas and is ranked in the Top 10. Check back here for full previews later this week!