For the first time at the renovated Olsen Field at Blue Bell Park, the Aggies find some Olsen Magic with a 9th inning come-from-behind win over Houston Baptist on Tuesday.

So I choose not to write up a midweek preview because Houston Baptist is really bad, and that's what I get in return? Let's not do that again, boys. To compensate, I'll do a quick midweek recap today before releasing tomorrow's Weekend Preview with Georgia coming to town for A&M's first-ever SEC baseball series.

It took a 9th inning rally and a pair of bases-loaded walks for the Aggies to overcome the Huskies in yesterday's midweek game at Olsen Field at Blue Bell Park. A&M started the game fast, scoring 3 runs in the 1st inning against HBU starter Tyler Hoelscher, 1 of which was courtesy of an error. The other 2 runs were a result of Cole Lankford's 2-run double - the Aggies lone hit with runners in scoring position (1-for-10 on the night) against the Huskies.

Corey Ray got the start for the Aggies, with Grayson Long possibly poised to start on Sunday due to Rafael Pineda's recent struggles, and it was smooth sailing through the first 3 innings. Ray retired the first 7 Huskies hitters he faced and 9 of the first 10. For whatever reason, though, the wheels fell off for Corey starting in the 4th inning. A pair of singles started the frame for HBU, followed by a bunt down the 3rd base line that stopped right on the chalk to load the bases with no outs when the Aggies attempted to let it roll foul. HBU cashed in immediately with a 2-run double that cut the A&M lead to 3-2. Ray got the 1st out of the inning on a fly out, then hit a batter to load the bases again, but struck out the next HBU batter for the 2nd out. The Huskies weren't done though, smacking a single back up the middle to score 2 runs and take a 4-3 lead.

A single and an RBI double to start the 5th inning was the end of the line for Corey Ray in this one, and Jason Freeman did a nice job of coming in from the bullpen and shutting down HBU to keep A&M in the game. Freeman pitched 2 2/3 innings without allowing a hit and struck out 4 batters, although he did also issue 3 walks. I liked the off-speed pitches that Jason threw in this one, keeping the Huskies off-balance on numerous occasions, but he does need to cut down on the walks. Parker Ray went 2/3 of an inning before Coach Childress went to closer Jason Jester, proving the Aggies knew this wasn't a game they could afford to lose.

The only other offense outside of the 1st inning that A&M would get prior to the 9th was a 5th inning blast to LF by Daniel Mengden, his first HR of the season and just the 3rd overall for the Aggies. A&M put runners on 1st and 2nd base in the 6th and 8th innings, but continued to have issues with RISP and were unable to cash in.

The Aggies were finally able to break through in the 9th inning once HBU went to a new pitcher after Hoelscher had thrown 143 pitches through 8 innings. Cole Lankford provided the only A&M hit in the 9th inning with a 1-out single, Jonathan Moroney reached on a fielder's choice with an error that allowed J.B. Moss (pinch-running) to move to 2nd, and then the new HBU pitcher Ryan Lower started handing out walks. Troy Stein drew a walk as a pinch hitter to load the bases, then Jace Statum earned a full-count walk to tie the game. Mikey Reynolds fouled off 5 straight 2-strike pitches before popping up for the 2nd out, but Krey Bratsen, after fouling the first pitch, watched 4 straight balls to collect the game-winning walk and secure the 6-5 victory for A&M.

So, what should we make of this?

We all know the phrase that's coming here - a win is a win. At the end of the day, winning an ugly and sloppy game is still far better than losing it, especially to an HBU team whose RPI sits near the 200 mark. If we're being honest though, this is a game that should have never even been close. A&M had multiple opportunities to break the game open with runners on base and were not able to do it, and then Corey Ray suddenly couldn't get anyone out. The hitting with runners in scoring position is without a doubt the biggest concern moving forward, and it has to get better quickly because going 1-for-10 with RISP will not win very many SEC games.

In the "reasons to be optimistic" category, there are some positive things to take away from this one - and even going back to Fullerton last weekend. First of all, it isn't as if the Aggies are simply not hitting or getting on base at all, as we have seen some A&M teams do in the past. In fact, A&M out-hit Fullerton 31-21 in the 3-game series this weekend and racked up 9 more hits (along with TEN walks!) against HBU yesterday. I'm of the belief that sooner or later the hitting will come with guys on base - hopefully if a couple of guys are able to get it going, the floodgates will open.

I know that quite a few people out there will say "Man, we only got 1 hit in that 9th inning and only won because their pitcher couldn't throw strikes." I won't say those people are totally wrong, but try and think about it this way. For a team struggling as badly as A&M is with runners in scoring position right now, how easy would it have been for guys to go up there swinging at borderline pitches because they're desperate to make something happen? Instead, guys like Troy Stein and Jace Statum, who have both had their fair share of offensive challenges so far in 2013, were patient at the plate and did what was necessary to get on base and win the game. For me, that's a good sign.

Player of the Game 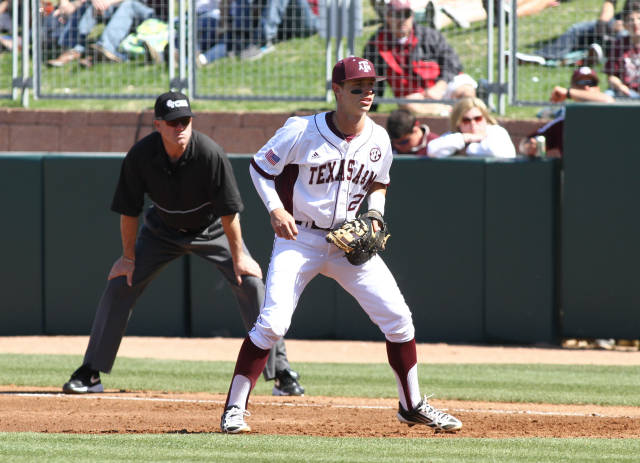 It was another strong game for Cole, who extended his team-leading RBI count to 13 and is tied with Mikey Reynolds for the team lead in slugging percentage at .500. Lankford is now hitting .357 on the season, and may warrant consideration for being moved up in the lineup.

The Aggies welcome the Georgia Bulldogs to Olsen Field at Blue Bell Park this weekend for A&M's first-ever SEC baseball series. Georgia has had an uninspiring start to the 2013 season, sitting at 8-8 on the year after knocking off Appalachian State last night (they will play another game today). The Bulldogs lost a weekend series to Georgia Southern, lost twice to Belmont, and has lost to Kennesaw State, Georgia State, Western Carolina and Liberty. We'll have a full preview and breakdown of the Bulldogs here on Good Bull Hunting tomorrow!