There are plenty of positives to build on, but many of the same questions still remain after A&M baseball drops a close and tough series in California.

Someone once told me "If if's and but's were candies and nuts, we'd all have a Merry Christmas." I think that is a pretty appropriate way to describe the weekend for Texas Aggie baseball on the West Coast. If the Aggies could have come up with a couple of hits in big spots... If the Sunday pitching hadn't walked 8 batters and hit 2 more... If one or 2 of the Titans' bunts in the 6th inning Saturday had rolled foul... But the offense finally woke up on Friday... But Cal State Fullerton is a top-ten team and will likely be a factor in the postseason... I could go on and on.

You could probably also get away with using "the more things change, the more they stay the same" considering the Aggies continued to do a flat out horrendous job of hitting with runners in scoring position. Stranding a combined 18 runners in Saturday and Sunday games is usually not a good recipe for winning baseball games. The most frustrating part for A&M fans is that the Aggies were one key hit away from coming back to win a Sunday game in which A&M pitchers issued 10 free passes. The Aggies were also one or two key hits away from winning a Saturday game in which they had the leadoff runner on base in each of the 6th, 7th and 8th innings but were unable to score a single run.

As usual, we'll focus on mostly big picture stuff from the weekend - if you want game-by-game recaps, check out Aggie Athletics for the Friday, Saturday and Sunday games. I'm going in reverse order this time, though.

I'm starting with this section this week because I hoped to discount last Sunday's game as a "blip on the radar" type of performance, but that proved not to be the case. Yes, our hitting with runners in scoring position - or just on base in general - is a strong candidate for The Ugly section, but it gets the bump this time because it's not quite as concerning to me as 2 consecutive Sunday games with a combined 23 (NOT A TYPO) free passes by our pitching staff.

Rafael Pineda may have pitched his way out of the Sunday starting spot for the time being. Rob Childress tries to give his guys every opportunity, but he's also a coach that will demand that you throw strikes. Pineda faced 4 UNC batters before being pulled in the 1st inning last Sunday, and he didn't even make it through the 3rd batter against Fullerton yesterday before Childress came to get him.

Considering what this team is working with at this point in the season, having a Sunday starter who can't record an out before you have to take him out of the game simply isn't going to cut it. I'm not entirely sure if it's mental, mechanical or some combination of those two things for Rafi at this point, but I am sure that whatever it is he needs to take some time to fix it. Frankly, I would be completely shocked if Pineda starts on the mound next Sunday against Georgia.

The door is wide open for someone to win the Sunday starting job, and the most likely candidates have to be Grayson Long and Corey Ray. My personal vote would be for Long because I've been more impressed with his stuff overall than Ray's, and Long has more long-term potential as a true freshman. He got put in a very tough spot yesterday and was not able to get the job done, but if he is able to have better control of his pitches he can be an excellent Sunday option. Obviously that is a fairly large "IF" considering Long is tied (with Corey Ray, for the record) for the most walks on the A&M staff with 10 in 17 2/3 innings.

It's almost to the point that it's become laughable now, but the Aggies continue to be virtually inept when it comes to hitting with runners in scoring position. Let's take a look at Saturday's game as a prime example. The Aggies put up 7 hits and drew a walk, but were unable to score a single run. Why? Glad you asked.

8th inning - lead off single for Reynolds, Bratsen flies out, Reynolds steals 2nd, Allemand flies out, Stein pinch hits for Mengden and grounds out. No runs.

OUCH. I watched all of that happen, but just typing it out there was painful. That's terrible.

Continuing in the bad category brings me to a coaching decision I didn't understand on Sunday. Down 3 runs in the 8th with 2 runners on and 1 out, Coach Childress decided to bring Chance Bolcerek in to pinch-hit for Charlie Curl, who, in fairness, has looked relatively lost at the plate but did have a hit in Sunday's game. Bolcerek, meanwhile, was hitless in his first 10 at-bats coming into Sunday, and promptly made that 11 and killed any possible A&M rally in the 8th by grounding into a double play. I know Curl is struggling and his .179 average doesn't inspire a lot of confidence, but Bolcerek's .000 average does?

After all of that, you would think we got swept by Fullerton this weekend. Fortunately, that didn't happen and there were some positives to take away from the weekend. Kyle Martin put in another strong performance on the mound, scattering 6 hits and allowing just 1 earned run through 6 2/3 innings and finally picking up his first win of the season. Daniel Mengden did a tremendous job of pitching on Saturday but took a tough-luck loss thanks to the Aggies' inability to produce runs. Mengden retired the first 11 batters he faced, and had allowed just 1 hit through 4 1/3 innings before being hit in the arm by a hard line drive off the bat of Michael Lorenzen. Mengden was able to stay in the game, but he allowed a run in the 5th and a run in the 6th before exiting. Mengden didn't play in Sunday's game, which you have to hope was precautionary because losing Mengden for any period of time would be a big blow.

I would be remiss if I didn't also mention Mikey Reynolds, who is just playing on a different level right now. It's Mikey's world and we're just living in it, honestly. Reynolds went 6-for-12 against the Titans on the weekend, scoring 3 runs and stealing 2 bases to bring his team-leading totals to 14 and 9 respectively in those 2 categories. If the bottom part of the batting order could turn things around with the way Mikey is playing right now, this A&M team has the potential to make some actual noise. Again, though, that still appears to be quite the "IF." 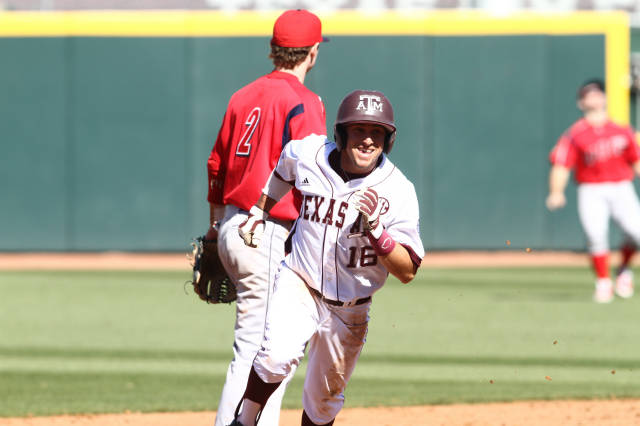 Honorable mention shoutouts here to Cole Lankford and Mitchell Nau, though, because they both had solid weekends at the plate which could be big moving forward. 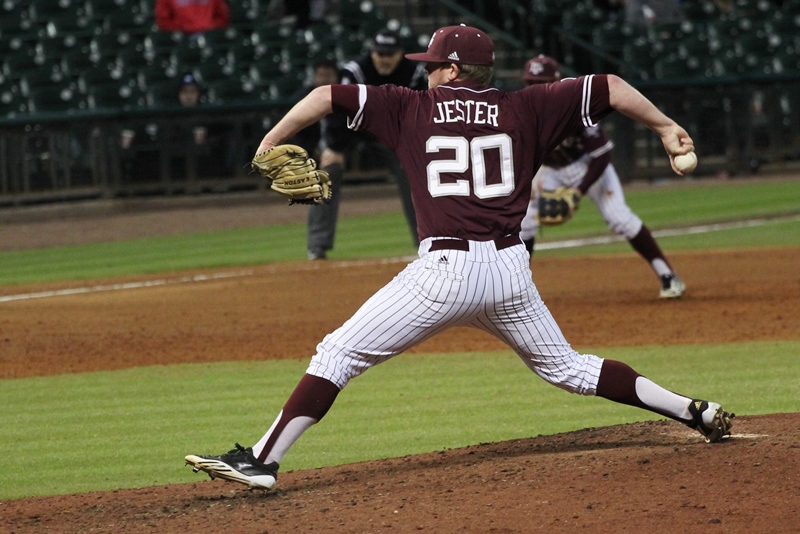 Jester was outstanding out of the bullpen for the Aggies this weekend, going a full 2 1/3 innings to pick up a big save in Friday's game and striking out 4 batters in that one. Jester has yet to allow a run on the season.

The Aggies will take on Houston Baptist in tomorrow's midweek game before welcoming the Georgia Bulldogs to Olsen Field for the first-ever SEC series for A&M. Georgia got off to a brutal 2-6 start to the season, although they have won 5 of their last 7 to bring their record to 7-8. Check back here for full breakdowns later this week.