I had to wait until after signing day to post this... because I am paranoid and don't want Mack Brown, Art Briles, Bob Stoops, Les Miles, Mike Gundy, or even Kliff "Kool" Kingsbury using this type of intel against us.

This is my best guess at our football recruiting pipeline as it stands today. Pay attention to the color key at the bottom. If you have constructive criticism, put it in the comments section below and I will make changes according to verifiable proof (links) you have describing where certain players should be slotted and who has left the team, etc.

|| LINK TO LARGER VERSION OF IMAGE BELOW || 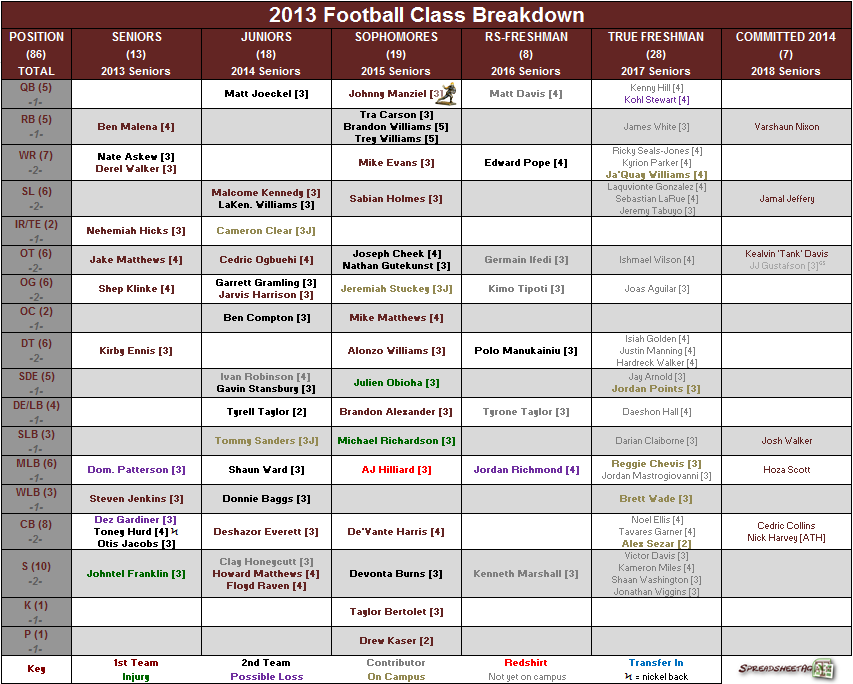 Note: The brackets after a players name indicates his Rivals Star Rating.

2. Nate Askew - Disappeared from Aggie Football conversation about mid-September of 2012

3. Kirby Ennis - Recently arrested and in the doghouse (at best)

4. Dominique Patterson - The most silent senior you ever didn't hear of (how is this guy a senior already?)

5. Jordan Richmond - I am pretty sure I read he is no longer with the team...

6. Dez Gardiner - 2nd most silent senior you ever didn't hear of...

1. Who backs up Johnny Manziel?

3. Who replaces Jake Matthews who is expect to move to LT after the early departure of Luke Joeckel?

4. Which young DT steps up?

5. Can Tommy Sanders be as good as Sean Porter?

6. How many Safeties get converted to SAM linebackers? (best candidates: Shaan Washington and Jon Wiggins)

7. How long can Floyd Raven grow his hair?