I said on Thursday that one of the keys for the Aggies to have success against Pepperdine was to be patient at the plate and be able to get runners on base. Welp. I made the mistake of assuming that runs would come if we were able to put guys on base. I was very wrong. A&M recorded 27 hits in the 3 games against the waves, yet were held to just 7 runs in the series. It's safe to say that this is a problem, and it certainly gives more ammunition for the growing group of Aggie fans who don't care for Andy Sawyers' (and by extension Rob Childress') offense.

I'm not going there right now. If things continue in this same direction, then we'll have that conversation. We're still just 8 games into the season with a lineup that is depending on a number of young guys. There is a ton more baseball to be played this year, but it goes without saying that the Aggies are going to have to fix the offensive issues and fix them quickly.

Instead of breaking down each individual game, I'm going to take a look at what went right and wrong on the weekend as a whole. If you're looking for a recap from each game, check out Aggie Athletics for Friday, Saturday, and Sunday games.

The starting pitching continues to be a major bright spot in an otherwise disappointing start to the 2013 season for Texas Aggie Baseball. Kyle Martin has the highest ERA of the 3 weekend starters at an impressive 1.98. K-Mart went head to head with Pepperdine ace pitcher Scott Frazier on Friday and more than held his own, leaving the game with the lead after 7 innings. Unfortunately, the A&M bullpen that had pitched well for most of the early season was unable to hold the lead and the Aggies' offense could not muster anything outside of the 3 runs scored in the 1st inning. Martin's final line included 3 earned runs on just 5 hits (and 1 hit batter) to go with 6 strikeouts.

Daniel Mengden picked up his second win on Saturday in as many starts on 2013, evening the series for the Aggies at 1 game apiece. Mengden was excellent on the mound through 7 innings, allowing just 1 earned run on 5 hits with 8 strikeouts and no walks or hit batters. Mengden also helped his own cause at the plate, going 2-4 and smacking a 2-run triple to RF that would prove to be the winning hit for A&M in a 3-1 victory.

Rafael Pineda has started the 2013 season very similar to how he started 2012, which is good news if you're Rob Childress. Pineda had a strong start for the second time in as many weeks, going 7 innings just 1 earned run on 6 hits with 3 strikeouts and no walks or hit batters. Unfortunately for Rafi, the Aggie offense was unable to score more than 1 run on 9 hits and he did not earn a decision.

All-in-all, you simply cannot ask for your starting pitchers to put you in any better position to win games than the 3 Aggie weekend starters have done so far in 2013. Martin, Mengden and Pineda combined to allow just 5 earned runs to the Waves this weekend, did not issue a single walk in 3 games, hit just 1 batter and struck out 17. Well done, gentlemen.

The bullpen really was not "bad" in this series per se, but relative to how they had pitched in the previous 5 games they did not have a very good weekend. Zach Brashear took the loss on Sunday and gave up a pair of runs (neither earned, however) in 2 appearances during the series. Matt Kent had trouble fielding a bunt on Friday (albeit a good one) that helped Pepperdine to a 3-run inning that turned a 3-2 A&M lead into a 5-3 deficit that they could not overcome.

The Aggies also were not as sharp defensively as they need to be, particularly at the catcher position. Troy Stein had a pair of bassed balls in the series, both of which resulted in runs for the Waves in decisive innings. Mikey Reynolds and Charlie Curl also committed a pair of errors on Sunday, but neither resulted in any runs for Pepperdine.

Those are really the only 2 things that I can find to put in this section. Which obviously leads us to...

The offense. Oh, the offense. For as good as the starting pitching was for A&M this weekend, the offense was nearly just as bad. Pepperdine is a respectable team with good pitching, but they are also a team that the Aggies scored 25 runs against in 2012 and a team that gave up 27 hits this weekend. The problem was not so much getting on base this weekend - the Aggies reached base 38 times in the series against Pepperdine. Unfortunately, that is where the hitting stopped for A&M as the Aggies were simply unable to bring the majority of those runners home.

Let's take a look at some more stats from the weekend that give you an idea of what cost A&M this series. The Aggies put runners on base 29 times with less than 2 outs. 24 runners were stranded on base. With runners in scoring position against the Waves, the Aggie hitters went 6-29 (.207 average) with a sacrifice fly, an RBI single, a 2-run single, and a 2-run triple. When you put 38 runners on base in a series, and 29 of them come with less than 2 outs, you have to be able to get significantly better offensive production if you want to win games.

Quite a few folks choose to focus on the lack of power for this A&M offense as the biggest concern, which is not an unfair point considering the Aggies have yet to hit a HR through 8 games. For me, not hitting the ball out of the park is not the biggest issue. A bigger problem is just 12 extra-base hits on the season so far (an average of 1.5 per game), and even more concerning is poor situational hitting and execution. An inability to lay down a bunt successfully to move runners over, for example, is something that is absolutely vital for the "small ball" offense to be successful.

Mikey Reynolds continued to have success batting in the lead off spot for the Aggies, going 5-for-11 and was hit by a pitch, but he was only able to drive in 1 run. Mikey's success at the top of the order and the struggles of those further down may force Rob Childress to move him down a couple spots in the order to try and get more at-bats for Mikey with runners in scoring position. In fact, the top 3 hitters in the A&M batting order had a fairly nice weekend at the plate, going a combined 11-for-34 (.324) with 3 RBI, a walk and 2 HBP. Meanwhile, the next 4 guys in the lineup who often had opportunities to bat with runners in scoring position struggled mightily against Pepperdine. Those 4-7 hitters went a combined 9-41 (.220) on the weekend with just 2 RBI, both belonging to Cole Lankford on Sunday. Troy Stein may be the most disappointing of the group, hitting just .250 so far this season with a single RBI. Plain and simple, that's not good enough for someone in the cleanup spot. I would expect Childress will look to move Troy down in the lineup and give Mengden or Moroney a shot in the 4 hole.

I've talked a fair amount about the sophomore class for the Aggies and the importance that they were going to have to this 2013 team's offensive success. Outside of Daniel Mengden, who is off to a strong start both offensively and on the mound, the rest of those sophomores have really struggled to find their way at the plate. Combining the numbers of Chance Bolcerek, Blake Allemand, Mitchell Nau and Cole Lankford (and again, excluding Mengden's) you have a .138 hitter with 4 RBI, all of them belonging to Lankford. Allemand has one of the more perplexing stat lines you'll see, going hitless in his first 17 trips to the plate, but walking 5 times and being hit twice by pitches which has helped him to score 5 runs. Coach Childress inserted freshman Logan Taylor into the lineup for Allemand on Sunday against the Waves, and he promptly collected his first hit (a double) as an Aggie and made a pair of fine defensive plays at 3rd base.

It will be very interesting to see what changes Childress and Sawyers decide to make to this A&M lineup in order to try and generate more runs. If it were up to me, I might try hitting Mikey in the 3rd spot in the order and seeing what Krey Bratsen, who was much improved offensively this weekend, can do at the leadoff spot. You also would like to have a nice balance of left and right-handed batters throughout the lineup, but with Allemand and Bolcerek yet to record a single hti between them you are left with just Cole Lankford and Jace Statum as your most reliable left-handed hitters. 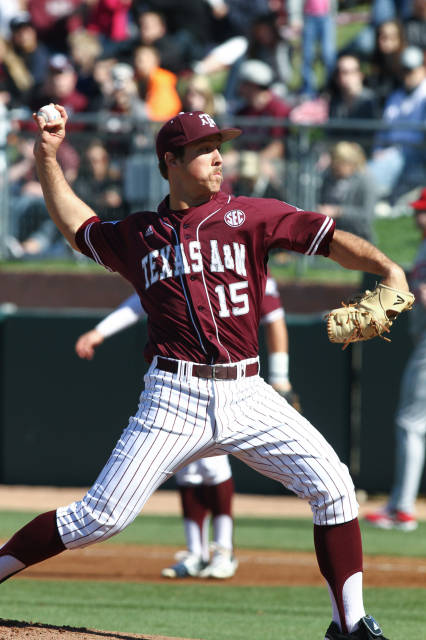 This one really could have gone to any of the 3 starters, but Mengden gets the nod here for helping his own cause offensively by going 2-4 with a 3B and knocking in the game-winning runs in his Saturday win. 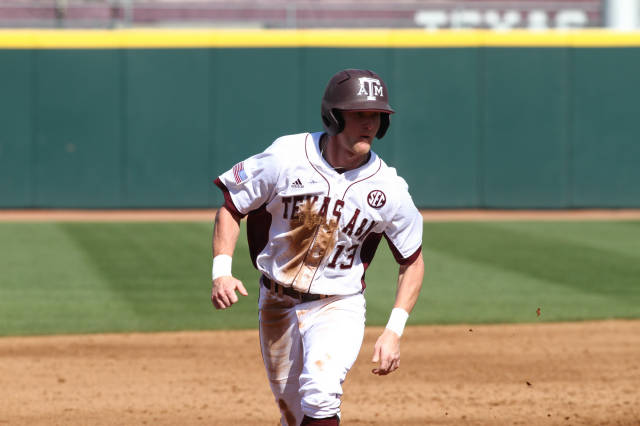 It was actually quite a positive weekend at the plate for Bratsen, who responded well to being moved to the bottom of the lineup on Friday and Saturday. Krey was also his outstanding defensively in center field as usual. Perhaps the most impressive stat for Krey so far in 2013 is that he has only struck out once through 8 games, something that he struggled with in 2012.

The Aggies have a pair of midweek games coming up against Northwestern State on Tuesday (6:35pm) and Wednesday (3:05pm) before heading to Houston for the Astros Foundation College Classic where they will take on Houston, Rice, and North Carolina. We'll have full previews right here this week as the Aggies will look to bounce back after a very disappointing weekend.