After winning their first series of 2013 over the weekend, Texas Aggie Baseball gets ready to take on Stephen F. Austin and Texas Southern in a pair of midweek games. 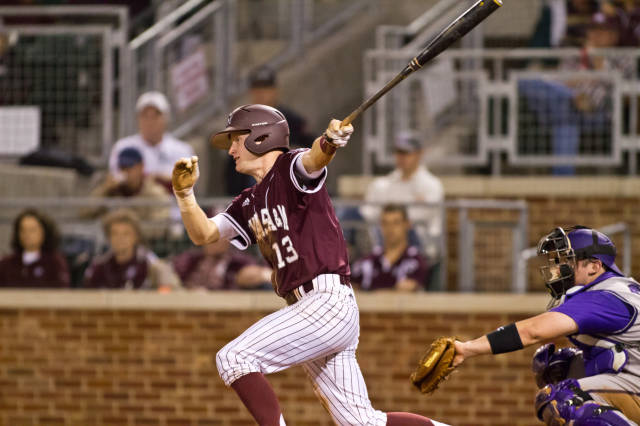 The Aggies return to action after taking 2 of 3 games against the University of Illinois-Chicago, while Stephen F. Austin comes into this game after being swept in 3 games on the road at South Alabama. The Lumberjacks were outscored 30-10 in their three losses in Mobile, AL this past weekend but will turn to their most reliable pitcher from 2012. Cameron Gann's 2.62 ERA last season was the lowest for an SFA starting pitcher since 2006.

Meanwhile, Coach Childress will give the ball to sophomore Corey Ray for the team's first midweek game of 2013. Ray had a decent freshman season for the Aggies last season, but did not get his 2013 season off to a good start in a relief appearance on Saturday. Corey pitched 1.1 innings in relief of Daniel Mengden against the UIC Flames and allowed 2 earned runs on 2 hits and 2 walks along with a wild pitch.

SS Hunter Dozier is the first ever preseason All-American for Stephen F. Austin and was the only SFA player to reach base in all 3 games of their weekend series. Meanwhile, 2B Freddy Villalobos is a power threat for the Lumberjacks after hitting 2 HR in SFA's 7-6 loss to South Alabama on Opening Night. The Aggies are 19-1 all-time against the Lumberjacks, and A&M won last season's game by a 4-3 score. 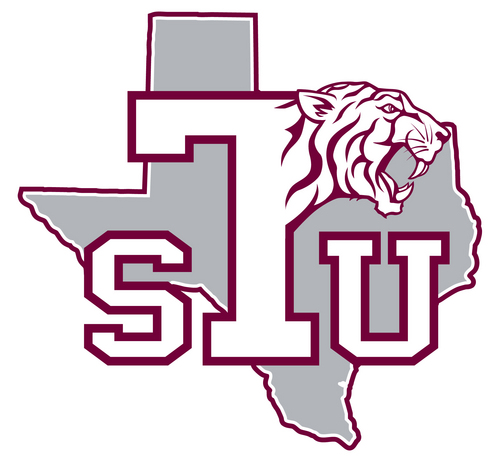 The Aggies and Tigers will meet at Olsen Field at Blue Bell Park on Wednesday for the first time since 2007. The Tigers come into this midweek game after going 3-1 in the Jackson State Invitational over the weekend, beating Eastern Illinois twice (4-3 and 10-7 scores) and splitting their 2 games with Jackson State (4-0 loss, 14-5 win). Texas Southern was a team that went 26-27 in the 2012 season and their offense is led by RF Sebastian Stargell who hit for a .329 average last year with a .452 on-base percentage. SS Chris DeLeon had a strong weekend for TSU going 8-for-17 in their 4 games and adding 2 RBI and 3 runs.
Highly regarded freshman pitcher Grayson Long will make his first start in the Maroon and White on Wednesday after making his first appearance for the Aggies in relief on Sunday. Long is consistently in the high 80's and low 90's with his fastball, his main pitch, and he can hit mid 90's with it at times as well. Long is listed as 6'5, 210 pounds and certainly has the physical attributes to develop into a dominant pitcher. Long struggled a bit with his control in his relief appearance on Sunday, issuing a walk and hitting a batter, but he was able to get out of his 1 inning of work without allowing any runs.
The Aggies have never lost to Texas Southern, going 12-0 all-time against the Tigers.

The Aggies' offense needs to make major strides in these 2 midweek contests as they get ready to welcome a very talented Pepperdine team into College Station next weekend. A&M will absolutely not win that series if they hit like they did this past weekend against UIC, but I expect to see guys continue to improve upon their hitting. Mikey Reynolds has been the most successful Aggie from an offensive standpoint, going 5-for-11 against the Flames with a pair of RBI and runs as well as a walk and stolen base.

Among those who struggled this weekend and need to improve are sophomores Blake Allemand and Mitchell Nau who went a combined 0-for-12 against UIC. Allemand saw freshman Logan Taylor earn the start at 3B in his place on Sunday, but I expect he will continue to get a chance to keep the job. Blake had a very nice freshman season last year and I still expect him to continue to get better in 2013, but it needs to happen sooner rather than later. Nau, meanwhile, saw action in the DH spot in 2 of the 3 weekend games but struggled to get anything going offensively. After a pedestrian 2012, Nau needs to start having more success at the plate or Coach Childress may be likely to use one of a number of other options in this role.

The Aggies have an extremely deep bullpen this season so if either starter is really struggling, Coach has the option to bring in any one of a number of guys who can eat up innings. I look for Grayson Long to have a big game in his first A&M start against Texas Southern, and I am hopeful that Corey Ray can bounce back from a less than stellar start on Saturday. I think the Aggies win both of these midweek games, as this SFA team is not quite as talented as the one that gave A&M all they could handle in 2012.

Later this week I'll take a look at how the Aggies perform in these 2 games and I'll also have a full preview of the Pepperdine team that will make the trip to Olsen this weekend.