We wrap up the Senior Spotlights with a GBH favorite and one of the more enjoyable Ags in recent memory, Mr. Spencer Nealy.

It is no secret that the historically proud Texas Aggie defense has been largely embattled and erratic over the past decade. As a unit, it has done little to merit the famed Wrecking Crew moniker of yesteryear. Offense-first coaching staffs in Aggieland, a spread Big 12, and misses on the recruiting front often spelled disastrous seasons on the defensive side of the ball.

In 2012, the defense entered the year led by new DC Mark Snyder with plenty of unknowns. A new league renowned for physical, power football awaited, and many Aggie fans were apprehensive about a unit that had failed to meet expectations all-too-often.

As it were, the defense overachieved and improved mightily each week despite razor-thin depth. One of the key factors in the year's success was the superb leadership of seniors at key positions. No one personified this leadership more than Spencer Nealy.

Like so many of the seniors in this great class, Nealy was expected to contribute immediately upon arrival to College Station. The 6'5", 277 lb. tackle out of San Antonio Reagan high school saw substantial action in all 13 games as a true freshman.

Nealy's sophomore campaign was highlighted by 20 tackles and 2.5 TFL. The most memorable play on the season was a tipped ball late in the victory over Texas in Austin that was intercepted by Von Miller. Nealy was a dependable anchor on Tim DeRuyter's defense and showed his studious chops by being named to the second-team All-Big 12 team.

2011 was a banner year for Nealy after unexpectedly becoming the starter at end after some injuries to others on the defense. Nealy earned honorable mention All-Big 12 after a season with 45 tackles and 8 TFL. Nealy had five or more tackles in five of the games he started and added 1.5 sacks and a forced fumble to an admirable season.

As a senior, Nealy displayed great leadership as the Aggies embarked upon the SEC. While starting in each game, Nealy racked up 42 tackles, 7.5 TFL, 2 sacks, and 3 passes broken up. 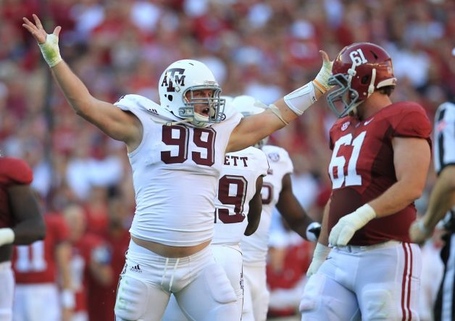 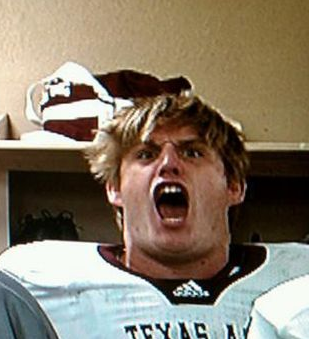 I guess what makes this dude so damn lovable is that he LOVES college and football and college football. Spencer Nealy played with a relentless motor, 270 pounds of enthusiasm, and lots of laughs. The Texas Aggie faithful fed off of Nealy's spirit, and it was obvious how beloved he was by his teammates. Some NFL GM is going to recognize these qualities and add a lot of value to his roster.

Thanks for everything, Spencer. You're a GBH hero, and hopefully we can have some laughs over many beers one of these days.