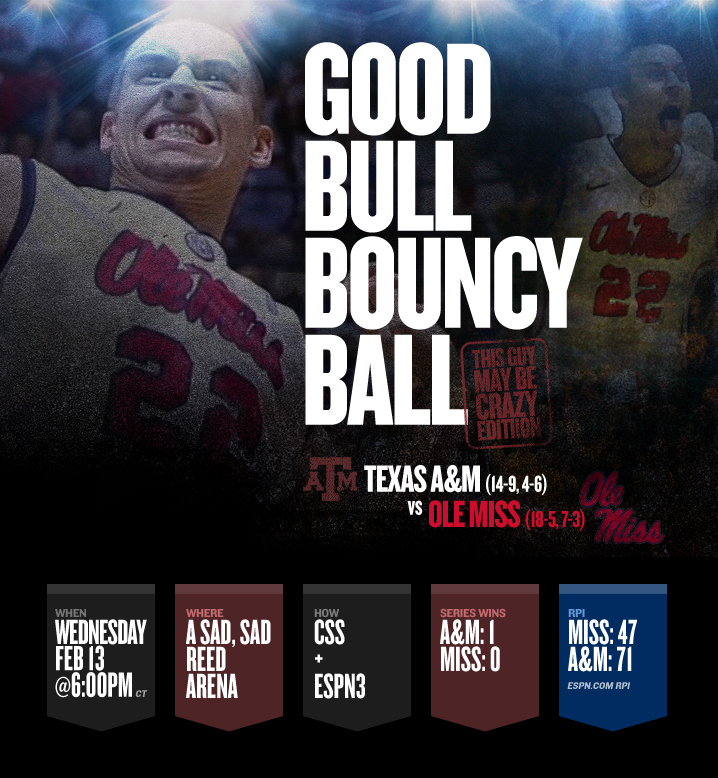 Marshall Henderson and a whole bunch of other somebodies.

So Marshall Henderson, the SEC’s leading scorer at 19.9 points per game, will be at Reed Arena on Wednesday. Oh yeah, the rest of the Ole Miss team will be there too, including the right-jabbing Reginald Buckner who will not be suspended for this fine display of sportsmanship last week.

Ole Miss is 5th in the nation in scoring 79.8 points per game. The Aggies are 281st in the nation scoring 62.7 points per game. It goes without saying that we don’t exactly want to get into a shootout with the Ole Miss Rebel Ackbar Black Bears. The Rebels are a team that plays with a lot of confidence and really wants to get out in transition to get some easy baskets. There’s also that Henderson fellow. In case you haven’t noticed, the kid really likes to shoot 3’s, way more than he likes shooting from inside the arc. It’s not even close. He’s attempted 251 3’s compared to only 89 from inside the arc. For the sake of my viewing pleasure, I really want Henderson to talk a lot of trash. The awkward blend of Boos and Horse Laughs in Reed Arena will make Dave South’s head explode. To our Ole Miss viewers, my wife that never attended A&M has an explanation of this for you:

There are certain things you do as a fan if you don’t like something that happens during a game. If you don’t like something you hiss. A ref makes a bad call you hiss, and you shake your hands like a rattle snake. I think that you do this because snakes are scary, no one likes them, and in Texas if you see a snake you either try and cut its head off or shoot it. Hissing is like saying “you resemble a sneaky little snake and I don’t like you or anything you stand for!” On the flip side, if you like something in Aggieland you Whoop. If a player makes a 3 pointer you whoop. In my head this makes sense, whooping would scare a snake away. What’s the saying “they’re more scared of you than you are of them.” You make a loud noise and it turns around and you’re safe. Mystery solved!

Bottom line: Consistency has been the absolute crux of this Aggie Basketball team. In this case, let’s see if it plays in our favor. We played against Missouri like the teams of the BCG era that made Aggies everywhere fall in love with basketball in Aggieland. We followed that up by pooping our pants against Georgia on the road. Billy Kennedy’s 2nd Law of Consistent Inconsistency states that a solid showing follows a terrible showing that followed a solid showing. Hooray Cajun phsyics!

Andy Kennedy is strikingly bald, impatient with his underlings, and harbors a violent distaste for those he believes to be below him socially. With a penchant for verbal outbursts and impetuousness, Andy Kennedy is firm in his belief that talent will prevail over planning. Yes, Andy Kennedy is Tom Riddle with just a slightly better profile. 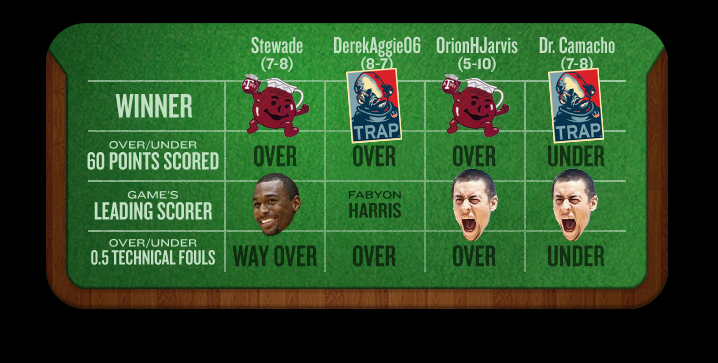 On the importance of offensive rebounding...

"...I give you the mausoleum of all hope and desire...I give it to you not that you may remember time, but that you might forget it now and then for a moment and not spend all of your breath trying to conquer it. Because no battle is ever won he said. They are not even fought. The field only reveals to man his own folly and despair, and victory is an illusion of philosophers and fools."

On this year's SEC season...

"A man is the sum of his misfortunes. One day you'd think misfortune would get tired but then time is your misfortune"

On the importance of free throw shooting...

On Marshall Henderson's rise to stardom... 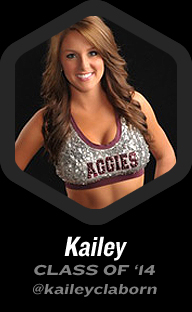 Do you feed off the energy from the crowd as much as the players do in big games?

Definitely. When the crowd gets excited, you can feel the atmosphere in Reed change and you can't help but feed off of their energy. Not only is it an adrenaline rush for the players, but it is also exciting for us dancers as we cheer on the team./p>

There's been a lot of court-storming this season. Would you join the mob or run for cover?

I would probably join the mob. I wouldn't want to miss out on an exciting experience!

A player is diving out of bounds for a ball headed your direction. What's running through your head?

This actually happens all the time and it really is a terrifying experience. You don't realize how tall basketball players are until they are trampling you on the sidelines. If I see a player coming towards me, I am just focused on getting out of their way as soon as possible. But sometimes you just have to take the hit and laugh it off!

I forgot this was the first game we sucked. RT @gknauert: Shooting 24% is a coach problem? Our guys just couldn't find the basket.

So the plan is to Harlem Shake twice within 24 hours...