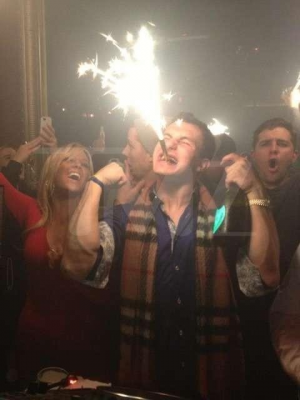 Is it possible to look forward to a bowl game so much, yet at the same time, want this day to never come? With the possibility of tonight's match-up against Duke being the final time we see JFF and MFE wearing maroon on the field, you will need plenty of mixed drinks to subdue your mixed emotions. Thankfully, our bowl game this season falls on a night when even your non-Aggie friends will withhold judgement for the copious amounts alcohol that you're about to consume. If you're among the many Aggies including myself watching the Chick-fil-A Peach Bowl at your New Year's Eve party (or pre-party), here's something fun to play along with.

Finish your drink if:

Finish another drink at the conclusion of the game because:

And just as every drinking games goes, feel free to add your own rules as the game progresses. We will all be witnessing history in one form or another tonight. I hope everyone has a safe and exciting celebration, and a Happy New Year!
BTHO duke.