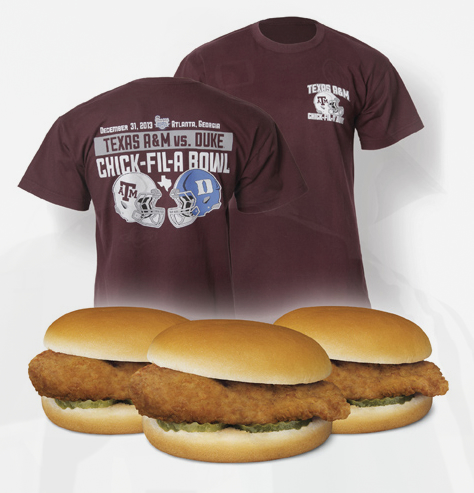 GAMEDAY GAMEDAY GAMEDAY. It's finally here, gang. Get out the popcorn and hooch. I'm calling my shot - you're going to see one hell of a performance tonight from the finest college football player of the last 25+ years.

#1 IN OUR HEARTS, #2 ON THE FIELD, #? IN THE 2014 DRAFT. Gil Brandt of NFL.com is reporting what we all kind of knew already - dad isn't just going out for cigarettes he's entering the 2014 NFL Draft. Expect an announcement soon from Johnny and Mike declaring their intentions. Go get 'em, fellas, but tonight, put a big ass bow on two short, phenomenal Aggie football careers. Legend status stuff.

WHAT ARE THE CROOTS SAYIN BOUT JOHNNY LEAVING? Our compadres at Saturday Down South caught up with a few Aggie commits and got their take on Johnny leaving. None were surprised and all think Johnny is a cool cat. Remember when the narrative was that Johnny is a horrible teammate?

BOOTS ON THE GROUND IN ATL. As we've mentioned in several other areas, Lucas Jackson and Dr. Norris Camacho are representing the GBH pirate ship in Atlanta. They're credentialed and everything - like real journos! Now they just need some pleated khakis, white sneakers, a paunchy gut, and strong opinions on who IS and IS NOT classy in the coaching ranks. No seriously, these are our journalists. Follow them on the twitter.

Where is the Advil?

A Buffalo Wild Wings commercial that identifies the leading causes of discontent in American society and addresses them appropriately.

Remember, dudes: the GBH Corporate AmEx is a Subway Stamp Card that expired in 1997 so the tabs at the gentlemen's club cannot be expensed.

CLASS CLASS CLASS OMG SO MUCH CLASS. Mack Brown has taught me that by calling media members by their first names while looking like you're on the verge of tears that you can be come classiest classer that ever classed. If I read "class act" one more time from some journo fan boy I'm going to vomit on a litter of rescue puppies. Journos - at the very least try to scrounge up a thesaurus and go easy on the teat of Mack Brown. This is a man whose career ended in a submarine crash captained by a family favor to the McCoy's. Nepotism is so KLASSY. Oh, and Oregon drilled Texas. [insert Alamo jokes]

TEBOW! The petulant, stubborn arm punter has inked a gig to be an analyst for the SEC Network while still clinging to the illusion that his arm and brain are going to be divinely sanctified into anatomy that someone in the NFL will desire. Don't hold your breath for any hot sprots takes. Guy ain't too sharp.