Aggies up for Major Awards

Share All sharing options for: Aggies up for Major Awards

It's awards season in College Football, and Texas A&M is lucky enough to have the honor of sending a few players to Orlando to take part in the The Home Depot College Football Awards ceremony. Aggies in attendance will include WR Mike Evans, QB Johnny Manziel, OL Jake Matthews and P Drew Kaser. The show will go live at 6 p.m. CT tonight, December 12th.

Mike Evans will be on hand with a chance at winning the Fred Biletnikoff Award, given to the best Wide Receiver in the nation. Texas A&M has never had a winner for this award, and we'll be rooting like hell for the man we know is the best wide out in the nation, and a future first round NFL draft pick.

The other nominees for the award are Oregon State standout WR Brandin Cooks, and Clemson's (rhymes with DeAndre Hopkins) junior WR Sammy Watkins. Here is how they stack up:

The fact that Johnny Manziel has been playing hurt through the last few games definitely impacted Mike Evans' performance, and may impact his ability to receive the award. He's clearly the best receiver in the game right now, but Brandin Cooks has him beat statistically. One thing to note: Cooks' best game came against Utah, Watkins' best came against Virginia, and Evans' best came against the team in the national title game, Auburn. Also it should be noted that all of their last names end with an S.

Here's a compilation of Mike playing against Alabama, which I could watch all day:

Although he just celebrated his 21st birthday, we have confirmation that he is successfully trolling kids at Walt Disney World, and will be attending the award ceremony this evening. He'll be up for two awards tonight, The Maxwell, which is given to the best all-around player in college football; and the Davey O'Brien Award, given to the best quarterback in the nation. His competition for both awards will be Mr. Lifetime Achievement Alabama QB AJ McCarron, and FSU QB Jameis Winston.

Johnny's injury left him out of the hunt to be the best quarterback in the country this year, and I think he is a long shot to win the Davey O'Brien. People love the kids that go after national championships, so it's hard to imagine him taking home the Maxwell, but he should. He accounts for more offense than any other player in a major conference, played one of the toughest schedules, and makes Texas A&M a threat to win any game.

Jake Matthews chose to hang back a year after Luke Joeckel left to be the #2 pick in the 2013 NFL Draft. Both Mel Kiper and Todd McShay of ESPN believe that Jake Matthews is the best tackle in this draft class, and he's helped produce two Heisman worthy seasons for Johnny Manziel, and blocked for one of the most prolific offenses in college football.
Tonight Jake Matthews will be up for the Outland Trophy, given to the best lineman in the country each year. His competition includes Baylor's OG Cyril Richardson, and this year's Lombardi and Nagurski Award winner, Pittsburgh DT Aaron Donald. It will be tough sledding for Matthews to win this against Donald who is having a heck of a season, but he definitely has a fighting chance.
Not many people make highlight films for offensive tackles. Instead, I'll give you this compilation of grizzly bears fighting because it's pretty much the same thing:

In case you missed it, we did an interview with Drew earlier this week. Drew is the unsung hero of the Texas A&M team, and with another stellar performance in the Chick-fil-a Bowl, will own the Texas A&M record for a single-season punting average. He is currently averaging 47.97 yards per punt, besting Shane Lechler's 47.0 yard record, and he already holds the Texas A&M longest punt record after his 76-yard kick in the Rice game. The kid has been absolutely phenomenal this year, and will be a real weapon when our defense starts to come together next year.
Tonight, Drew Kaser is up for the Ray Guy Award, given annually to the best punter on the team. His competition is Purdue's Senior Cody Webster, and Memphis' Senior Tom Hornsey. The competition will be tight, but given that Drew has a staggeringly high passer rating of 125.20, and the others are at 0, it shouldn't even be a question. 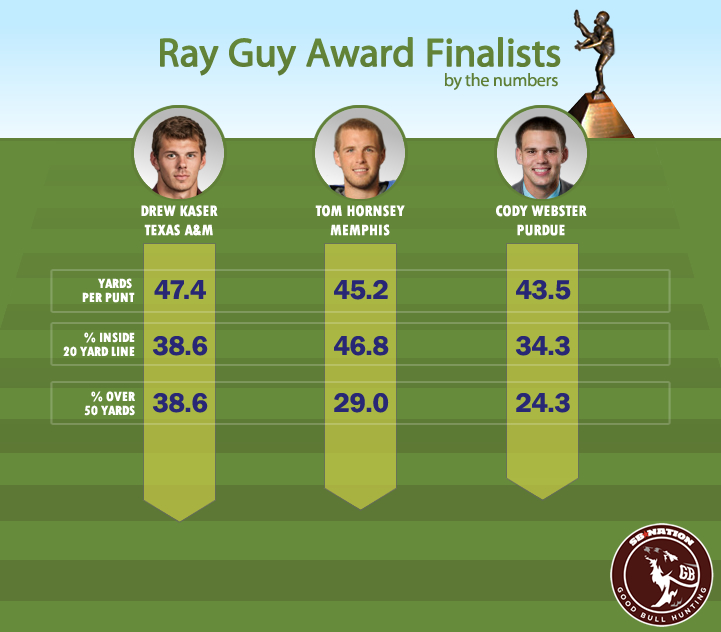 Like Offensive Tackles, people don't typically make highlight videos for punters either. Cuppycup and I decided that wouldn't stand, so we compiled a video of all of his punts and set them to rap. Enjoy.