Our good friend PodKATT from And The Valley Shook gives us the 411 on LSU tailgating for Aggies making the trek to Baton Rouge.

It's been 20 years since you Ags came to Baton Rouge, and after getting multiple questions about it on twitter, I've decided to provide GBH with a little guide for surviving this particular Saturday in the Red Stick. 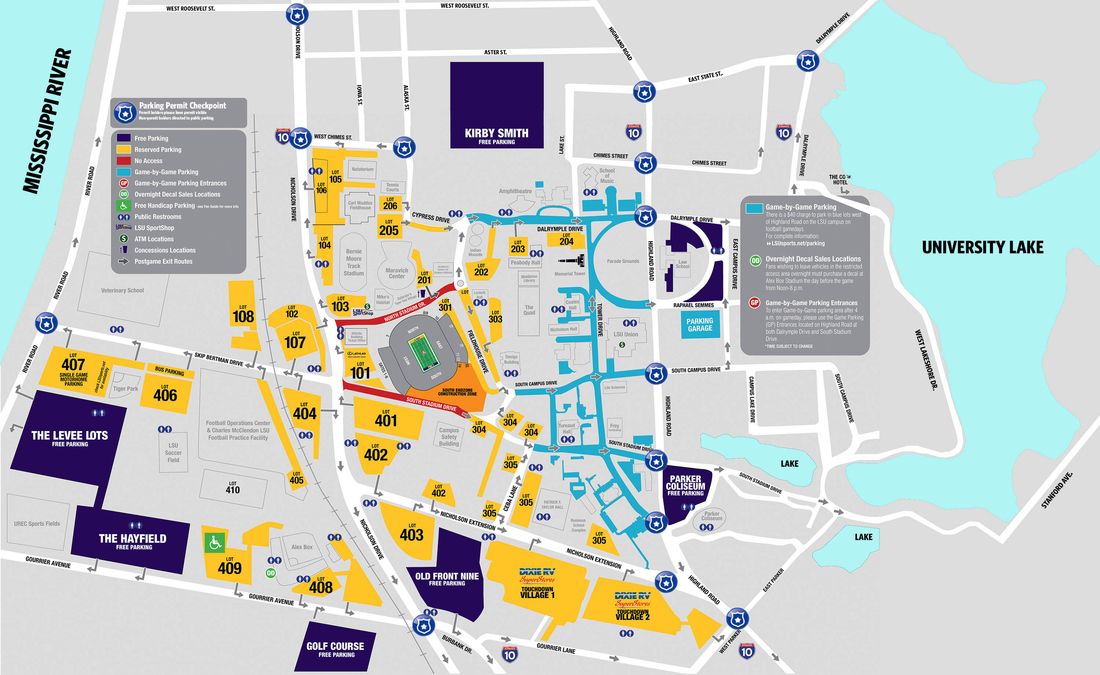 LSU provides a pretty comprehensive website for guidelines and specific restrictions, but I'll break down the highlights for you.

Season parking pass lots, you can only access these if you have a pass purchased in the preseason. These are the passes you typically see sold online along with tickets. Setting up a tailgate near these areas is open to all just like the rest of campus, but free space is hard to come by on conference weekends.

The spaces around the Law School (see below) are concrete and marked, but there are not many of them and most fill up the night before. If you're getting to campus after about 9:30, don't even bother trying there. Parker Coliseum is also a concrete lot and probably your best bet for free parking until about noon if you plan to hang around on the East side of campus. Kirby Smith is the last of the free paved parking, but be aware that this is also a student high-rise dorm parking lot and some of the lot has been taken over for construction, so space is limited.

The Hayfield and Levee Lots, The golf course, and the Old Front Nine are all grass lots where they pack them in as tight as possible. If you're planning to pregame with someone in a RV, these are your best spots. Be aware that, as they are just grass fields, they will get muddy in the rain and may even be partially closed if there is a lot of standing water in the morning. 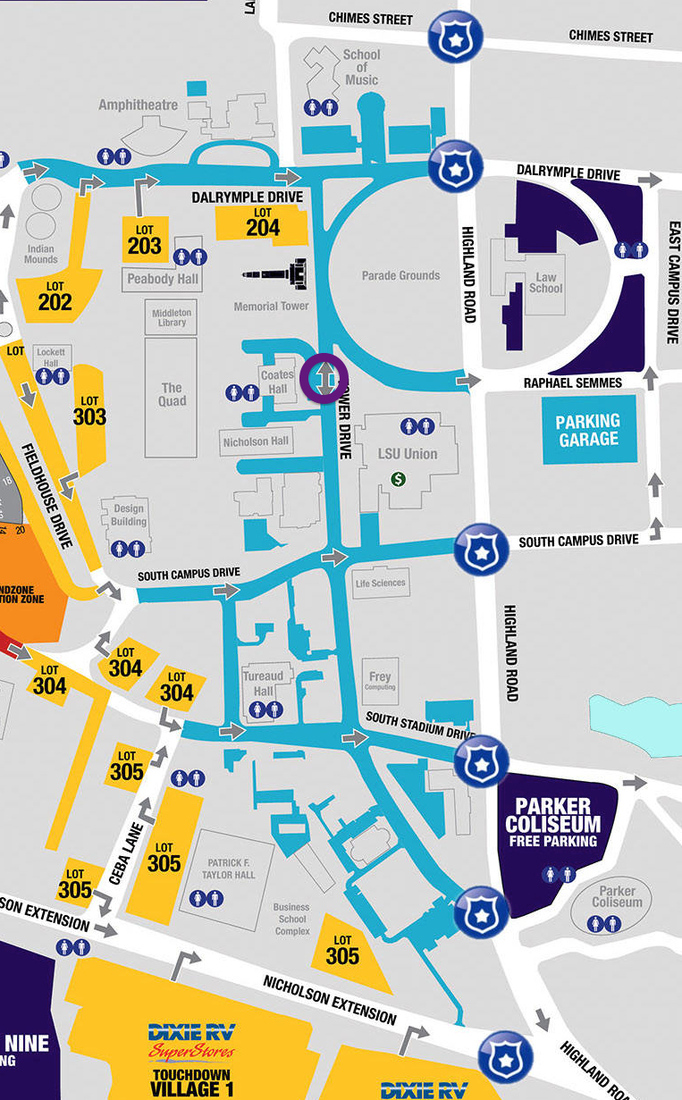 There are 2 sections to the Blue Lots. The parking garage is exactly what it says. It has the advantage that you can purchase a day pass for it ahead of time and print it out at home. The disadvantage is that LSU wants $80 per space (yes, we think that's ridiculous too). If you're interested, you can purchase a pass from LSU's ticketing web site.

The rest of the blue area is a $40 pay-at-the-gate area. Access to this area is completely blocked unless you have a parking pass, so you cannot even drive around in it to drop someone/something off. This central campus area is where a lot of the best LSU tailgating happens. If you're coming from A&M and want to stake a claim to some land, the Parade Grounds always have plenty of space (be aware that there is no parking and no stopping allowed on Highland Road). As the morning goes on, traffic and parking in this area becomes incrementally difficult until gridlock brings the east side of campus to a near standstill about 3 hours before kickoff.

Be aware, however, that this weekend in particular, the ROTCs are staking their own claim.

The one thing altering the usual tailgate this weekend is the LSU Salutes program. Every year the home game weekend closest to memorial day is marked as a celebration and memorial for graduates of the Ole War Skule. LSU has a long standing tradition since it's founding as a military seminary in 1860, which includes being behind only the service academies and A&M in sending officers to WWII and mandatory ROTC enrollment for freshmen and sophomores that only ended in 1969.

The ceremonies include a memorial service held on the parade grounds which typically includes the induction of a few service members into the Hall of Honor, a flyover, a parade of the still sizable ROTCs, and a 21 gun salute from the artillery battery. 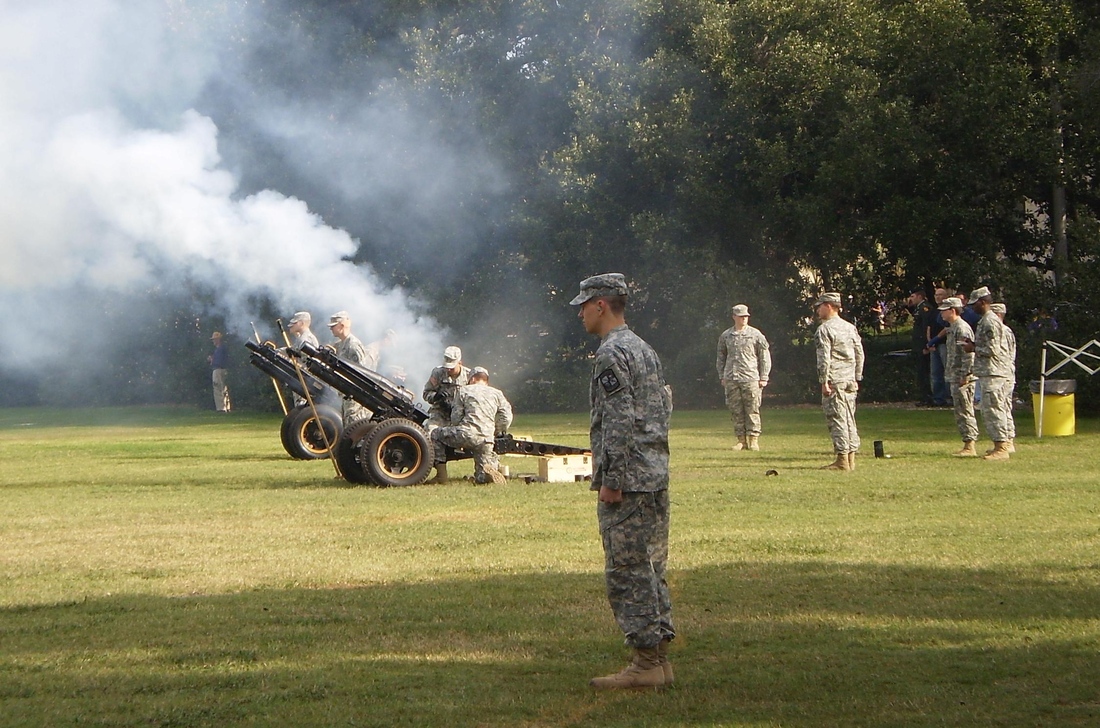 (yes, that's an ROTC parade surrounded by a football tailgate)

The issue is that the Parade Grounds, while still the Ole War Skule's home turf, is one of the prime tailgating locations on campus. For the ceremonies, the parking around the half circle of the parade grounds is reserved for guests of the ceremony until it ends around 11am, which will make parking in that area pretty tough. The official A&M Association of Former Students tailgate is going to be in the southwestern corner of the parade grounds near the LSU Union, which means you'll need to park elsewhere and walk.

Unlike many places in the SEC (IM LOOKING AT YOU, OLE MISS, WITH YOUR COLD, STALE, SANDWICHES) there are almost no restrictions on open flame cooking and the equipment you can use. Essentially, if you can haul it in the back of a pickup, and you promise not to burn campus down, it's fair game. I'd ask that you tailgate responsibly and have something prepared to properly dispose of cooking oils if that's how you roll. There are tons of trash cans everywhere on campus, but they never seem to be enough.

When it comes to beverages of the alcoholic nature, everything is fair game. Wanna walk across campus swigging directly from a bottle of Maker's Mark? Go right ahead, you don't even need to put it in a bag. Those of you underage be aware that the enforcement cops have been particularly vicious with the tickets this season.

LSU Tailgating is not like anything else you have ever experienced. Getting to campus 3 hours before kickoff is considered embarrassingly late (and don't even bother, as you'll spend most of the remaining time just trying to park.) If you're staying in NOLA, I'd recommend you leave as early as your hangover will allow. If you're actually going to be setting up your own tailgate, you can setup and leave tent frames as early as 5pm on Friday. All green space on campus is up for grabs (unless clearly marked by the University) and while LSU provides no watch against things getting stolen, it is generally an unwritten rule of the tailgate that an empty pop-up tent frame will not be moved and can be left overnight with no worries. The CBS kickoff means early lunch at most tailgates. Personally, I like to watch the team, Mike, and the LSU band come down North Stadium Dr. on Victory Hill, which will happen around 12:30 on Saturday. When the band cranks up there, it is truly a sight to behold. If you have a ticket, it's not a bad idea to get to the stadium about 1 hour to 30 minutes before kickoff, as the south endzone construction has created some bad bottlenecks at the entrance gates during home games this year.

Don't have a ticket? There are plenty of tailgates that don't shut down for the games. Find one that's friendly and you'll have no trouble watching the game. If you're looking for more of a bar experience, The Chimes/Varsity Theater at the North Gate on Highland Rd is hand's down the best option. There are plenty of options around that area too. Personal recommendation: Avoid the bar area across the tracks south of campus known as Tigerland. It is the worst parts of the college bar scene all rolled into a bad part of town. 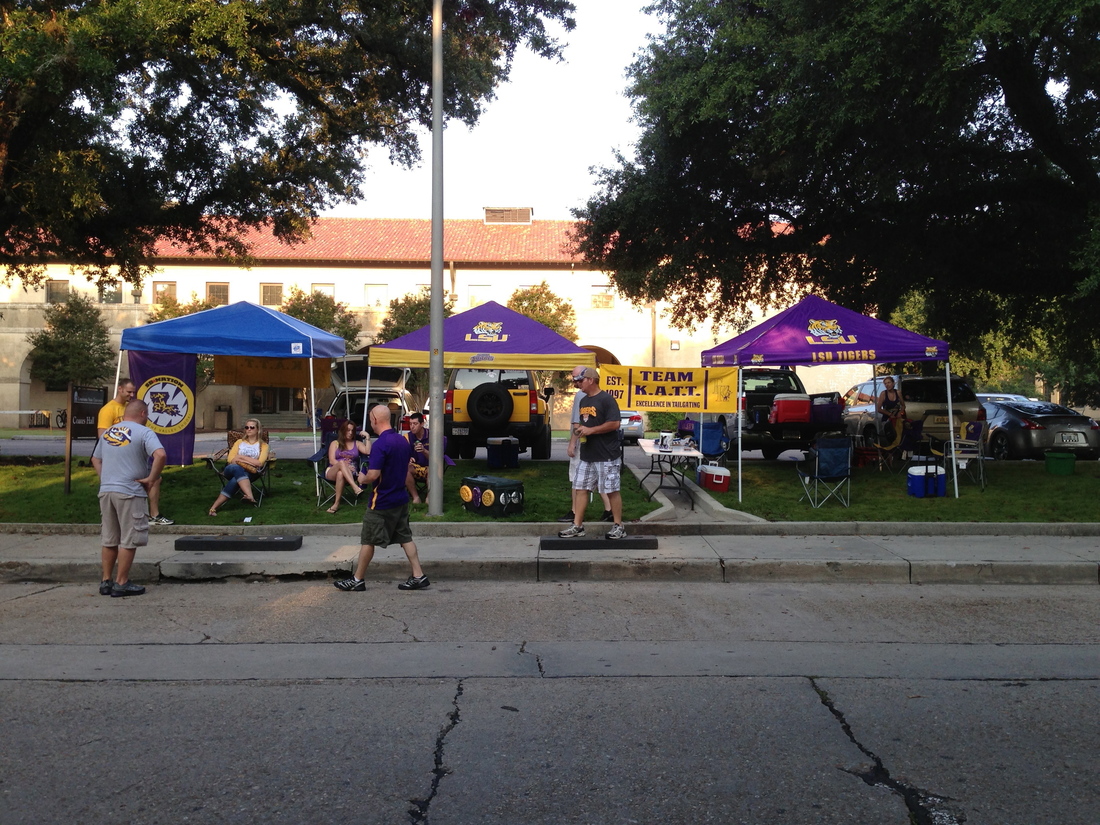 As for myself, the group of diehards known as Team KATT will be at our usual spot, Tower Dr. in front of Coates Hall, rain or shine and usually around dawn. I've marked it on the blue lot map above with a purple circle. Come on by, and ask for PodKATT. You might even run into a luminary or two from GBH this weekend.

I'll stick around in the comments below if y'all have any specific questions that need answering.