Even with the Texas A&M prolific offense scoring over 40 points in all of its games this season, you can tell there just isn't something right. What happened to the running game? Why is Johnny now constantly under pressure? It begins with the offensive line.

Share All sharing options for: Diagnosing What's Wrong With the Aggie Offensive Line

After the Mississippi State game, I was extremely frustrated by our offensive performance. Even though the offense scored 51 points and accumulated 537 offensive yards on the day, something just didn't feel right. We weren't running the ball effectively, and Johnny Manziel was under more pressure than I had seen him his entire time in the maroon and white. It had to come down to offensive line play, so I decided to look under the hood to determine why this All-American group was underperforming.

It didn't take long for me to quickly diagnose where this Texas A&M run game was struggling. 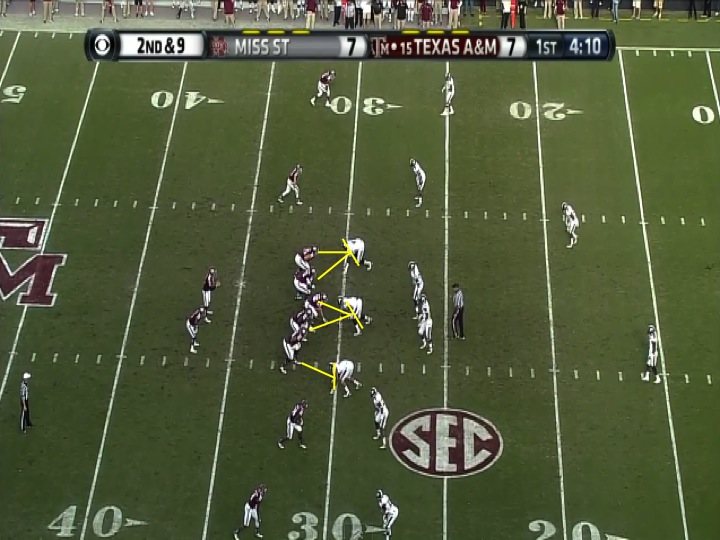 Take a look at this defensive front Texas A&M faces on a second down play. The Aggies align in a 2x2 formation, and Mississippi State is in a 3-2-6 defense with only 5 total defensive linemen and linebackers on the field. Normally, A&M should be salivating seeing this defensive front. Mississippi State was begging for Texas A&M to run the ball, and with our cast of offensive linemen, we should have won this play before the snap of the football.

But that is not what happens. 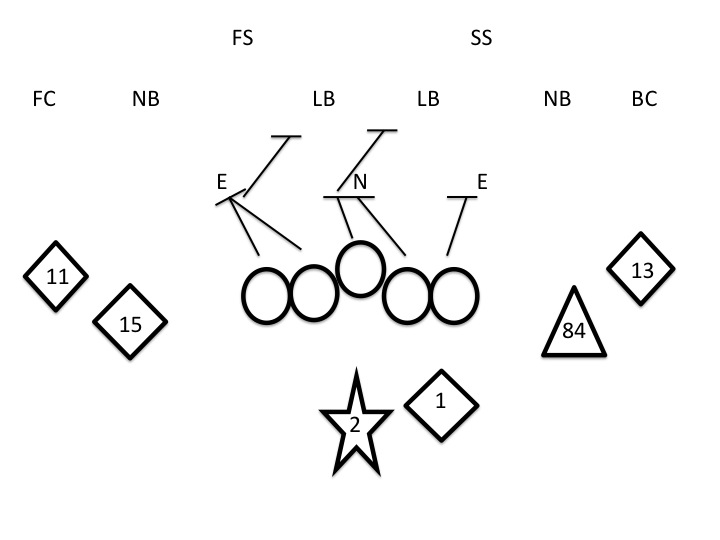 The problem on this play is that the A&M offensive line doesn't work up to those second level linebackers. In fact, our 5 offensive linemen have their hands full with only 3 Bulldog defensive linemen. Because nobody works up to the linebackers, they are free to make the play on Ben Malena for a minimal gain. 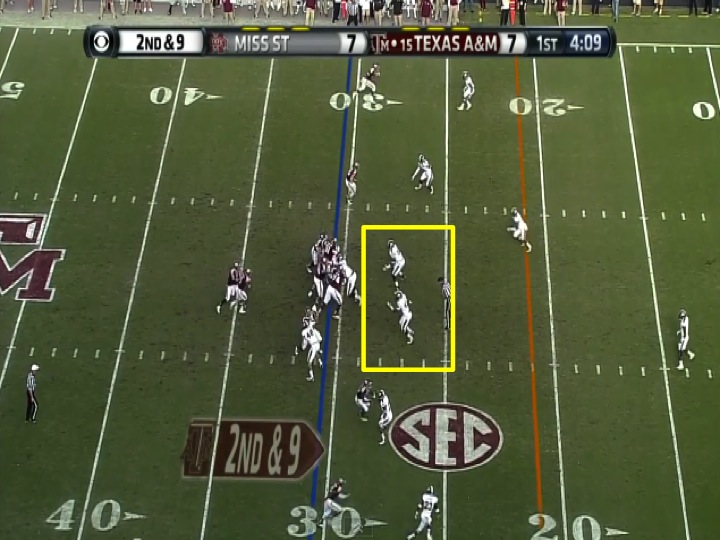 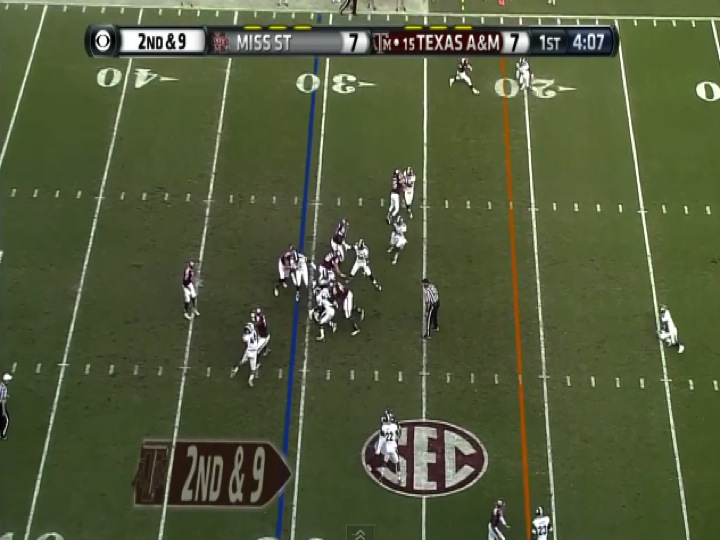 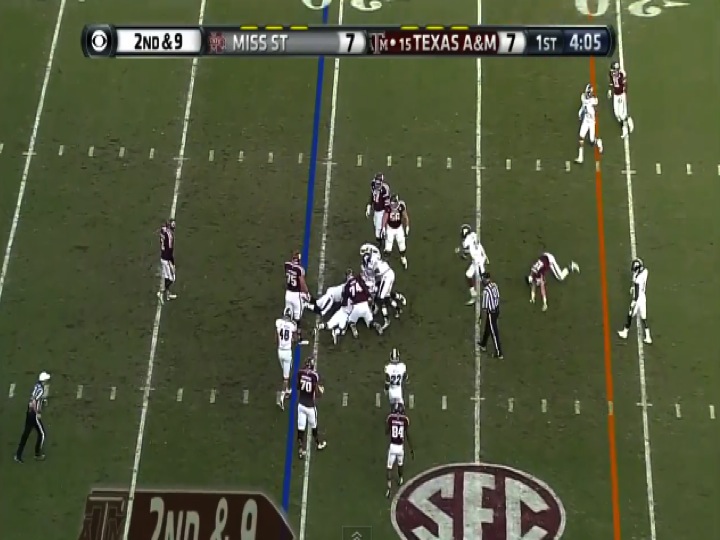 Now let's turn our attention to a drive in the second quarter. Backed up against our own goal line, we will actually run the ball for three consecutive plays, but go three-and-out and have to punt.

On the 1st down play, A&M will come out in a pistol formation, adding a tight end in the backfield to become a lead blocker for Trey Williams. It will be a simple dive-type play. The Mississippi State defense has crowded the line of scrimmage, and will be keying on the run. There will be 7 defenders to A&M's 6 blockers, and Mississippi State should win this play from the start. Every one of the Bulldog linebackers will fill their gaps quickly after they recognize the impending run play. Note the Bulldog left defensive end and nose guard on this play will run a stunt with the end looping back around to the middle of the line as shown. 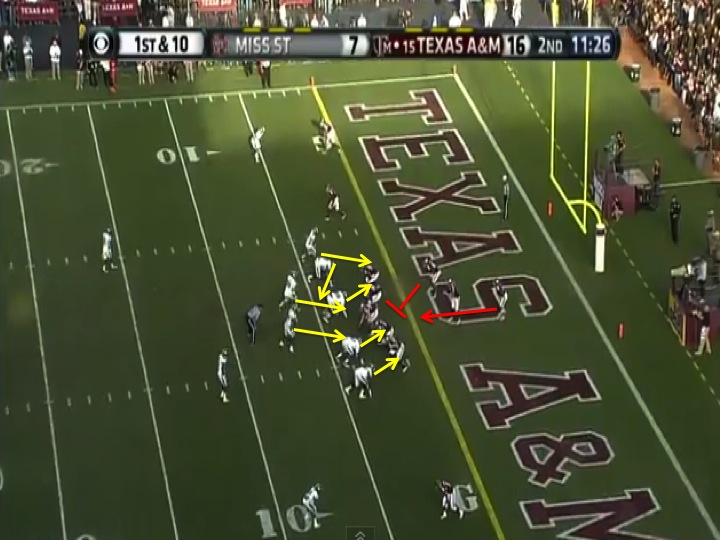 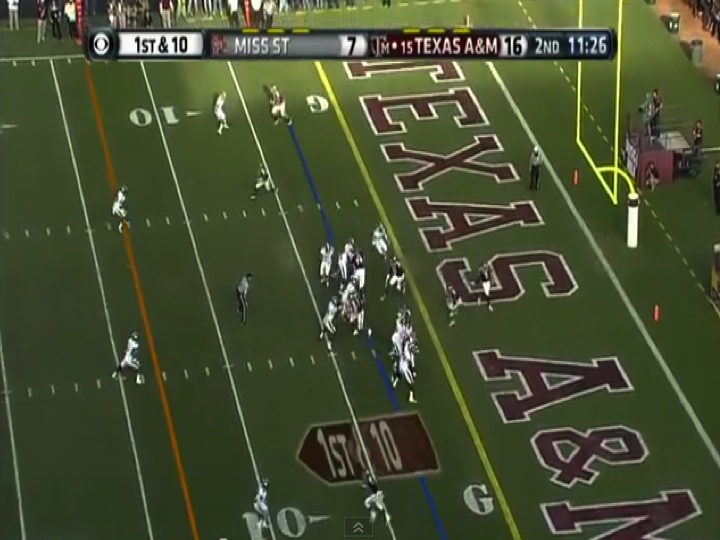 Now like I said, Mississippi State should win this play on numbers alone. In fact, there are two Bulldog defenders free to make this play: one off the edge unblocked, and the other is that looping defensive end now in the middle of the formation.

However, Trey Williams is a special player. He recognizes the cut-back lane, and with his start and stop capabilities, he makes the cut and turns this short gainer into an eight yard run. Just marvel at the skill of Trey Williams making something out of this dead-in-the-water play. 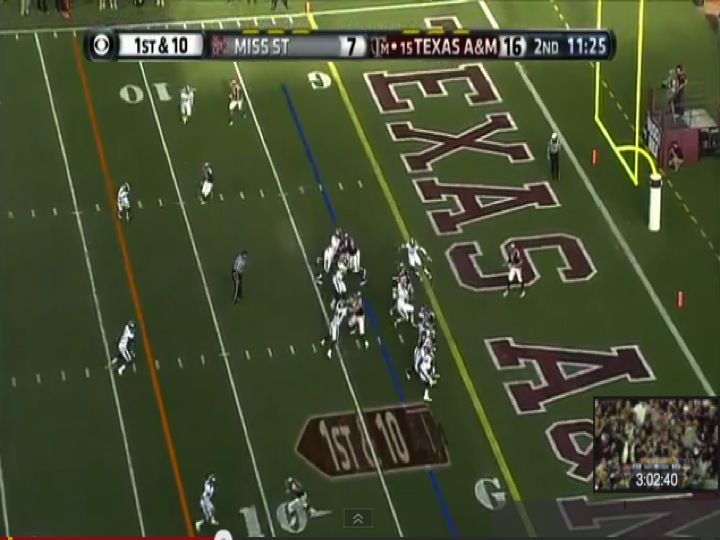 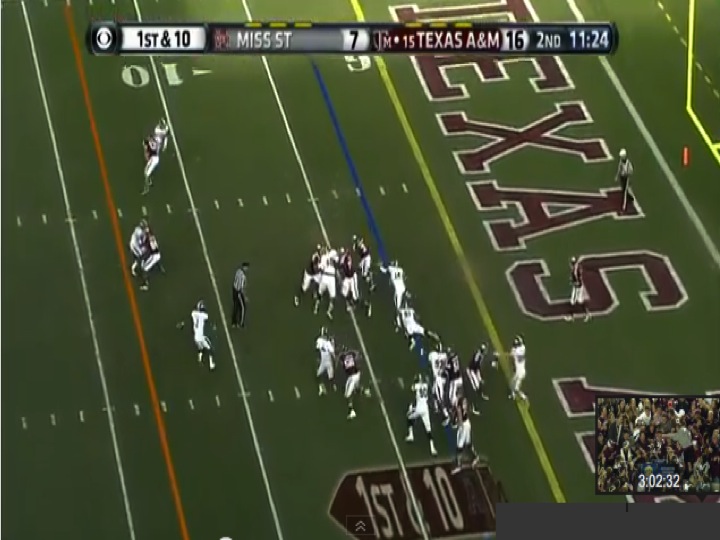 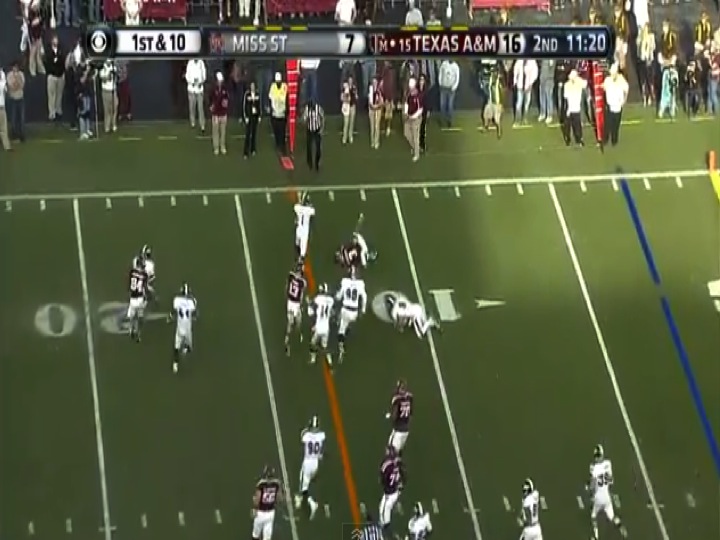 On the 2nd down play, A&M will once again hand the ball off to Trey Williams but this time in their more "traditional" 3x1 formation. Here Ifedi will pull and become a lead blocker for Trey on the edge.

Once again, Mississippi State has made a great defensive call that allows them to win the play before the ball is even snapped. The corner to the top of the field will be blitzing on this play (highlighted). You can tell he will be coming in on the blitz too by the way he is lined up inside of Mike Evans. Normally, no corner would dare line up on the inside of Evans, especially with no safety help in fear of getting beat down the field on a go route. I wish Johnny could have recognized this pre-snap and check to a pass to Evans, taking advantage of the blitzing corner and a safety out of position. It could have been an instant touchdown. Alas, it does not happen and the play is run as called. 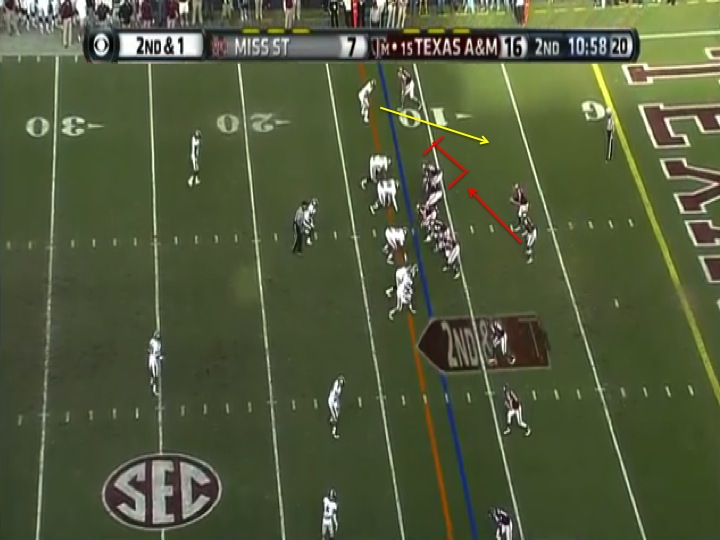 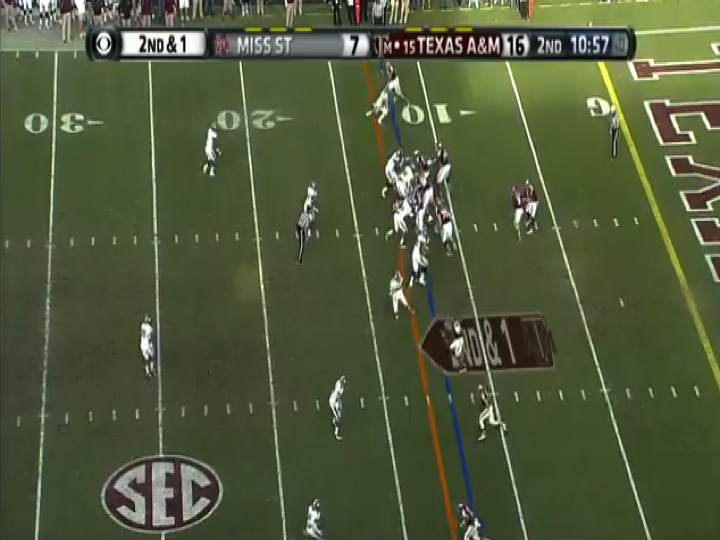 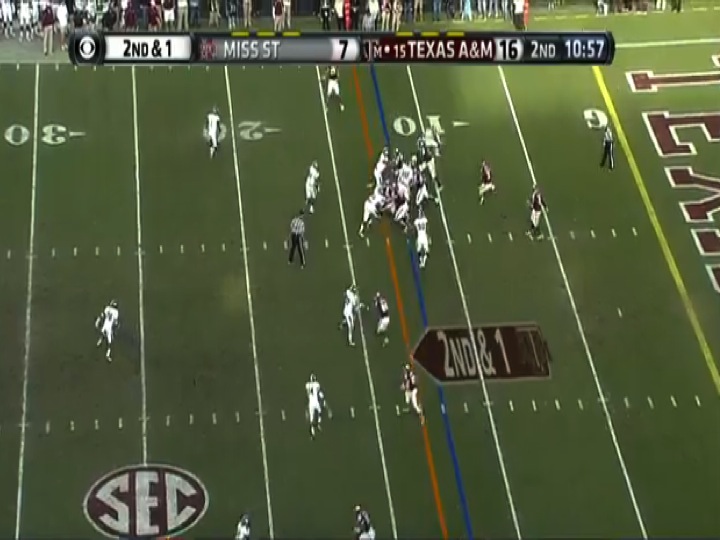 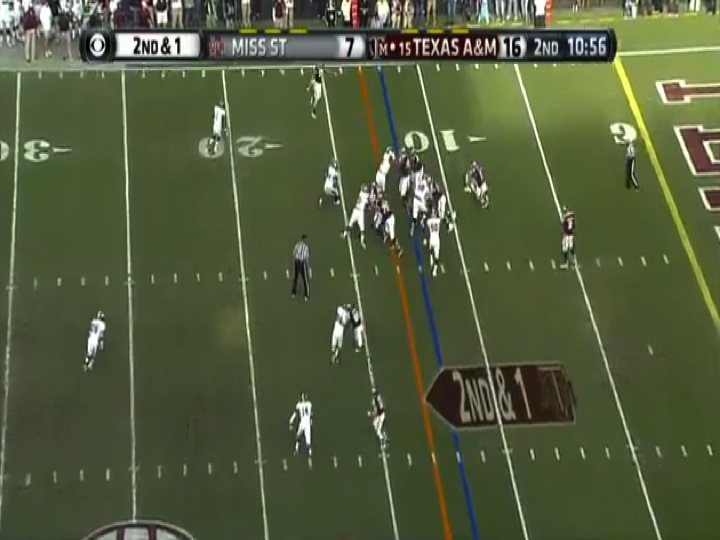 Trey will make the blitzing corner miss and dive at this ankles, but him having to adjust to the outside blitz will disrupt his timing on the play, and allow the following defensive lineman to make the play at the original line of scrimmage.

Mike Matthews will lose his individual battle against true freshman and five star defensive lineman Chris Jones. He allows Jones to run down the line of scrimmage and make the play on Trey. 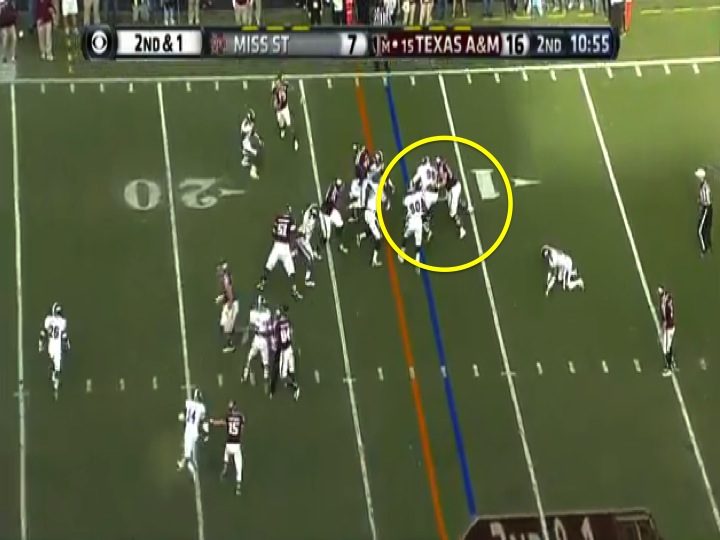 This next 3rd down play has to be one of the most disappointing from the entire Mississippi State contest. A&M will now bring in an extra blocker in tight end Cam Clear into the backfield with Ben Malena to try and power their way to a first down. Mississippi State will bring out their 4-2-5 personnel. With 6 A&M blockers against 6 Bulldog defensive linemen and linebackers, this should be an automatic first down. But once again we see the manifestation of what plagued the Aggie offensive line all game long: 1) failure to reach the second level of the defense and 2) failure to win one-on-one blocks in the inside of the offensive line. 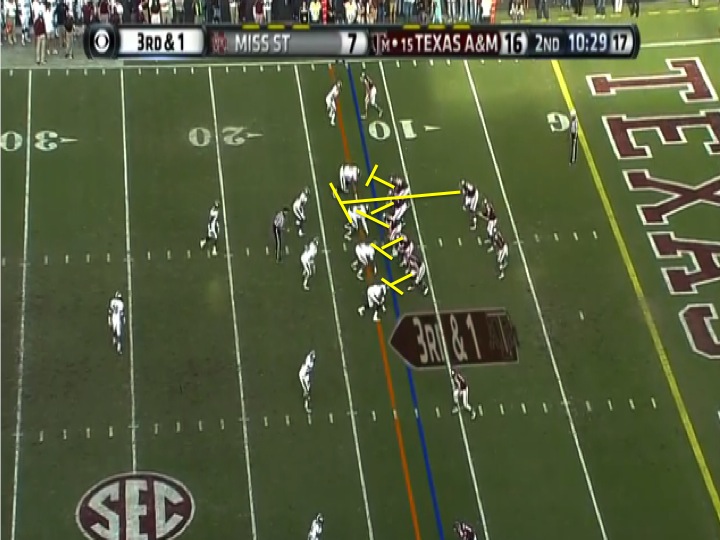 Here the Mississippi State linebackers are highlighted, showing their free path to fill their respective gaps they are responsible for. Cam Clear will meet the linebacker to the top in the hole, but he loses this battle and doesn't move him, leaving nowhere for Ben Malena to go with the ball. 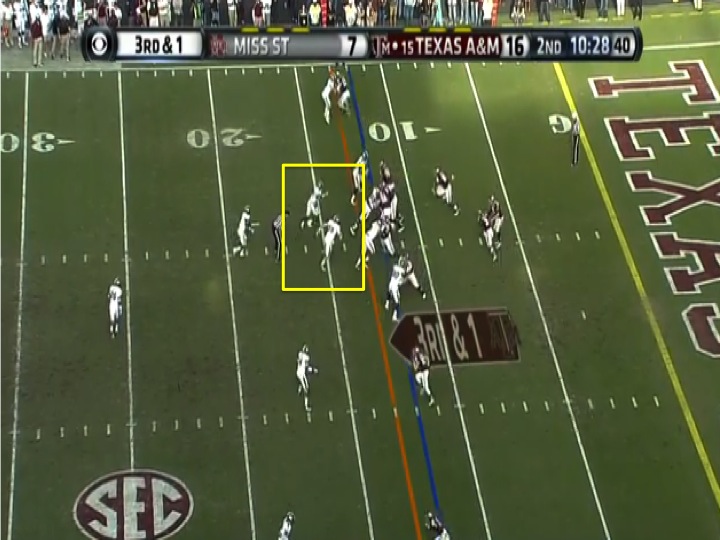 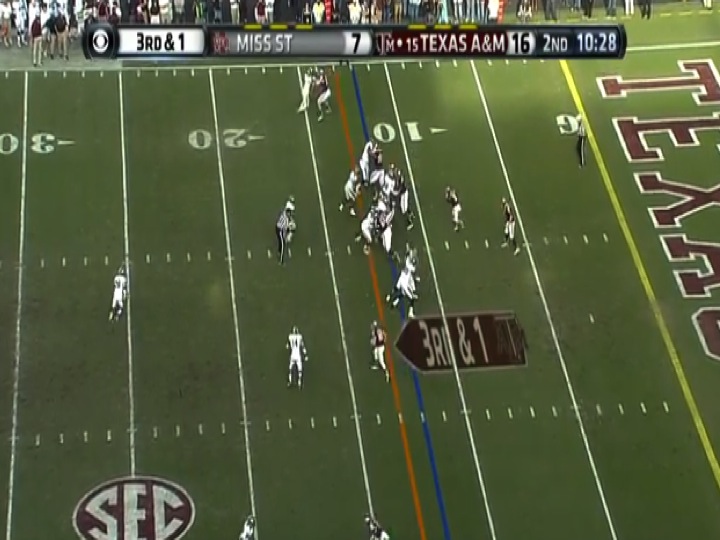 This time, it's Ifedi who losses his one-on-one matchup against Chris Jones allowing him to make the tackle on Ben Malena in the backfield and stopping this play short of the marker. 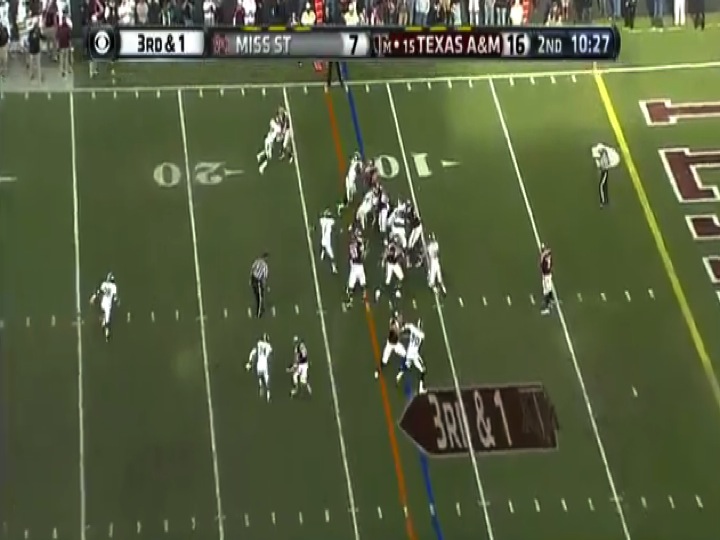 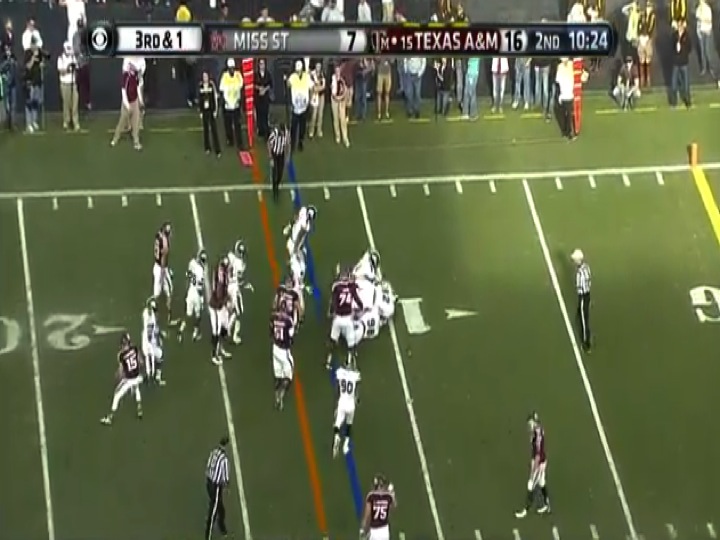 Now let's focus a little bit on where our offensive linemen are failing in pass protection. And it's not pretty.

This is a second-down play from the opening drive of the 3rd quarter, when many thought our offense would take control of the game after the half. The Aggies will start in a pistol 2x2 look, with Malena motioning out of the backfield before the snap. Mississippi State will bring 5 defenders on this play -- all four defensive linemen and one linebacker off the edge. What's going to make this play for the Bulldog defense is the stunt (the same one from above) between the left defense end and left defense tackle. The tackle will rush to the outside allowing the end to loop around back into the middle of the field. You can see the left defensive end giving his stunt away pre-snap because he lines up off-set from his tackle. This little adjustment allows him more room to make this stunt and not worry about colliding with the defensive tackle to his right. The right side of the offensive side should have recognized this. This stunt, along with the edge rusher, is going to confuse the right side of our offensive line and in particular Germain Ifedi. The lack of communication and awareness between the right side of the offensive line will allow a defender to go free and straight up the field to Manziel. 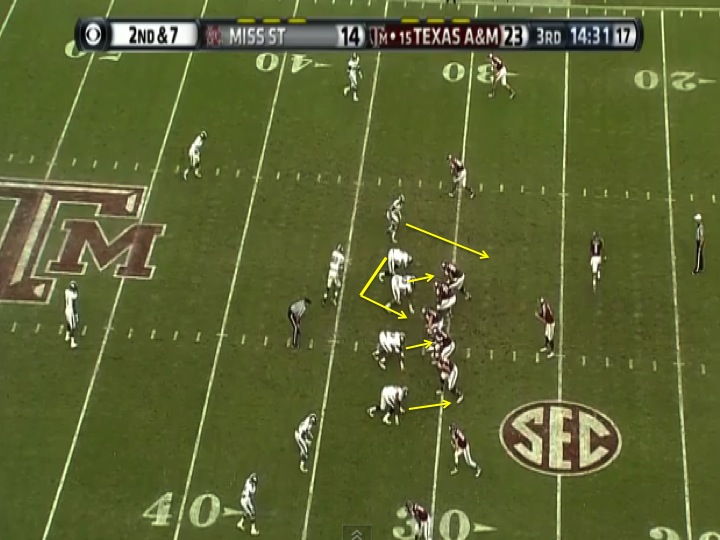 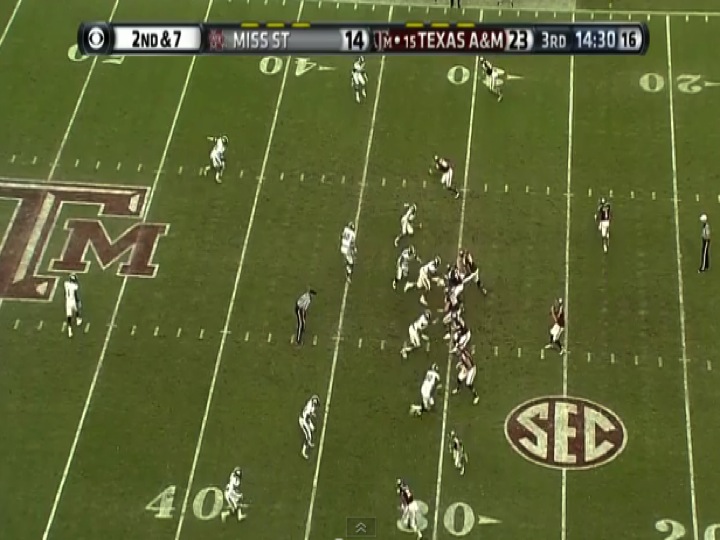 This is the point where the breakdown occurs. Cedric Ogbuehi is concentrated on the edge rusher as the last man of protection. I actually think this guy is more of a spy and is not committed to a hard rush. His job may solely have been to keep containment on Manziel. Anyway, with Ogbuehi focusing on the edge guy, he tries to pass off the slanting defensive tackle to Ifedi. Ifedi, meanwhile, is focusing more on that looping defensive end on the stunt. He believes Ogbuehi has the slanting tackle. Mike Matthews in turn was free to take on the stunting defensive end. Both Ifedi and Matthews really won't block anyone on this play before it is over. Everyone forgot about the defensive tackle, and he takes a straight path towards Manziel for the sack. A 2nd and 7 play ends with a 3rd down and 19 looming. 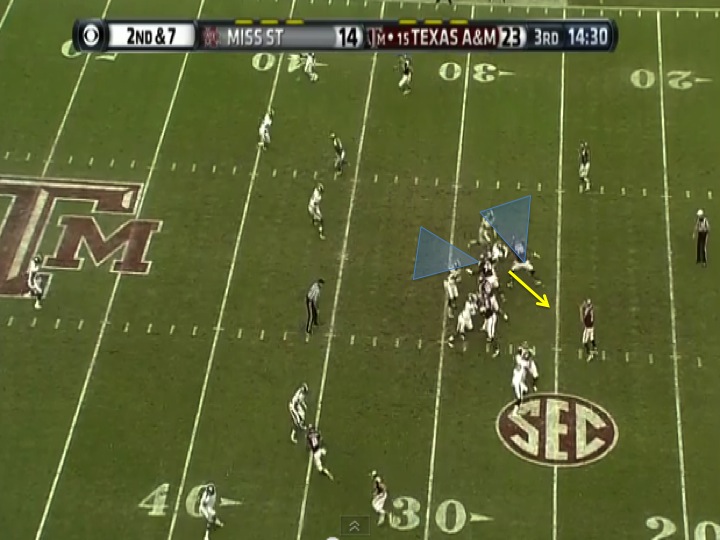 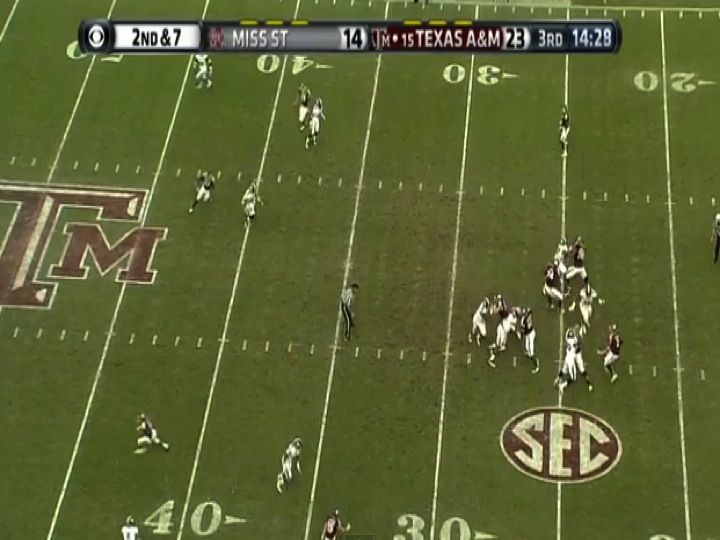 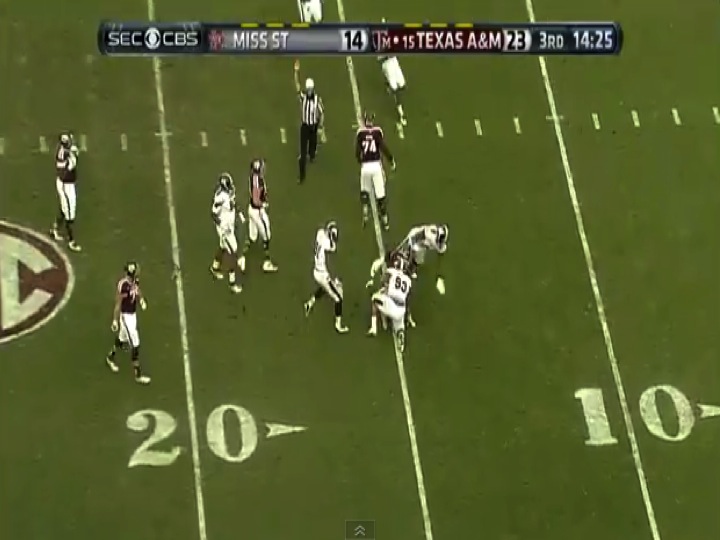 Unfortunately, it's not just the inexperienced linemen struggling in pass protection. It's the Outland Trophy contenders as well. On this third down play from the 1st quarter, Mississippi State will zone blitz against a Texas A&M 5-wide formation. Before the snap, the defenders act like all six will be coming on a blitz. However, after the snap the middle linebacker will drop back into coverage along with a defensive end. This is going to confuse even the best lineman in the country. 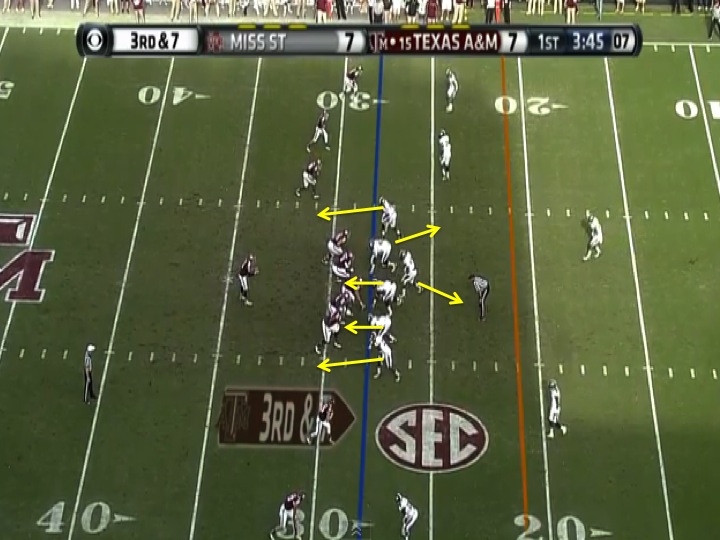 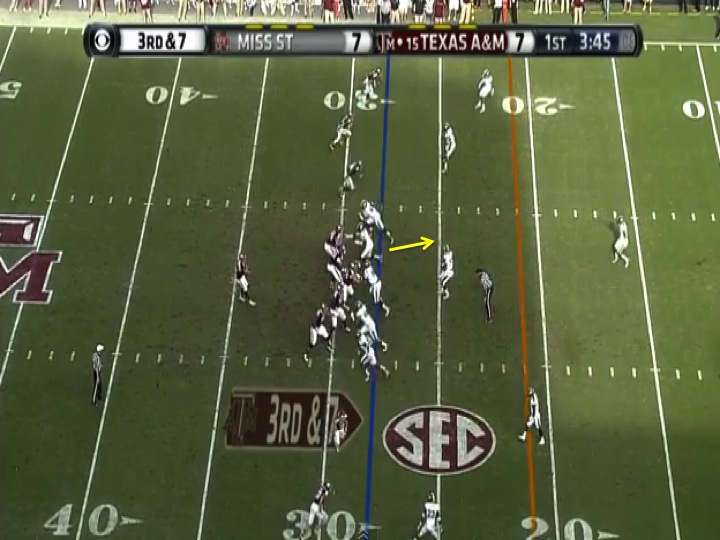 As the defensive end begins to drift back into coverage, Jake Matthews had to realize he had made a critical mistake. He has left the outside rusher unblocked with a free shot on his quarterback. Matthews doesn't even touch or make an attempt to block the guy off the edge. 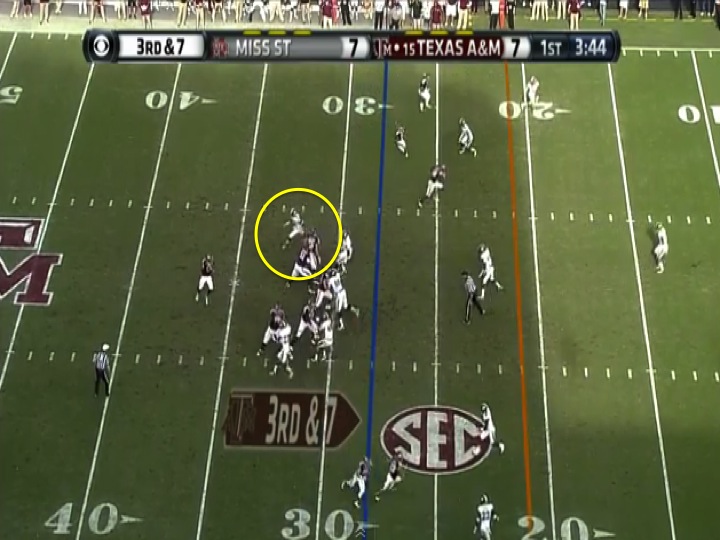 Luckily Johnny Manziel is a cheat code, and he quickly spins out of this play and finds a receiver down the field to convert this third down. Any other quarterback in college would have been sacked on this play and we'd be forced to attempt a field goal on 4th down. 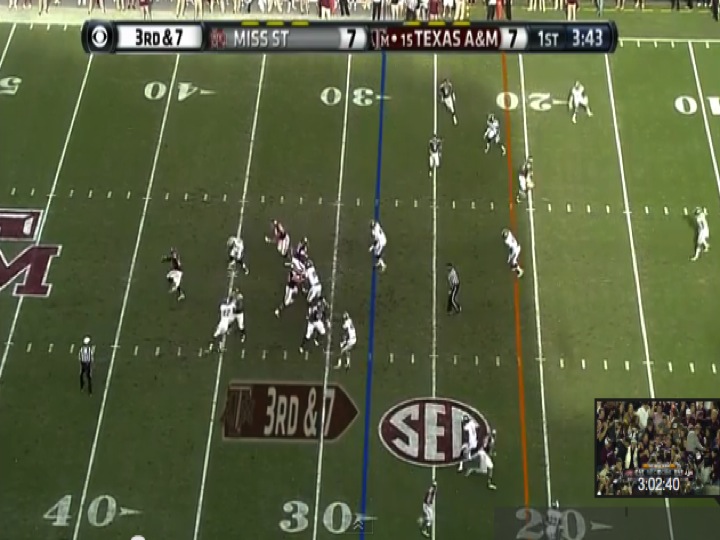 What makes it more frustrating is that this offensive line has gotten progressively worse as the season has concluded: not better. Now, the Mississippi State front 7 was a very solid group. They are better than people realize, especially Chris Jones in the middle who is only a freshman. But the A&M offensive line is playing with at least 3 future NFL players who will be drafted at some point. They shouldn't be thrown off by a zone blitz or simple stunt. The line needs better play in the middle with their two young starters, but guys like Jake Matthews can't be taking plays off either and making critical mistakes. It's almost like this offensive line is prepared for what they are seeing. Yes, teams have rarely had the courage to blitz Manziel so this line has had the luxury of blocking 3 or 4 rushers with no complicated blitz calls. But when a defensive coordinator has the courage to turn a blitz loose, our guys up front act like they had no clue what was coming. They MUST communicate better as a group and start working together both in run blocking and pass protection. It's as if each lineman is playing on his own, instead of as a unit of five.

The Aggie offensive line needs to have improved during the bye week. The types of stunts and blitzes they saw against Mississippi State are nothing compared to the packages that LSU defensive coordinator John Chavis will throw at them on Saturday.