A New Hope (sort of) Emerges

Sumlin to USC, to NFL, to Infinity and Beyond?…not if Mrs. Sumlin has anything to say about it.

Share All sharing options for: A New Hope (sort of) Emerges

"A New Hope", is something I discovered online while trying to find any reason to put my Kevin Sumlin to USC, to the NFL, to "fill in the blank", blues packing.  When I am suffering at the height of a completely irrational paranoia, I need tangible hope.  Although "A New Hope" is coincidentally the title of Episode 4 in a little series known as Star Wars, directed by a two-bit, USC film school graduate by the name of George Lucas - it also denotes the feeling I get when I read Charlene Sumlin's thoughts on College Station and TAMU. 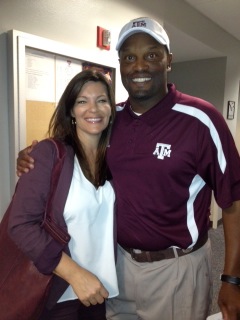 The Venerable Mrs. Charlene Sumlin and her lesser known husband Kevin (both pictured above).

In an article posted almost one year ago to the day, Mrs. Sumlin eloquently describes her love for College Station and the activities she has invested herself in, amid her favorite stop on Coach Sumlin's sterling career.  A happy wife is a happy life and Kevin Sumlin certainly knows that much. So take solace in the following piece submitted by Mrs. Charlene Sumlin to FANtinista Zone "Where Sports, Information, and Fashion Collide" – in other words a site that is rarely visited by the terribly dressed heathens of Good Bull Hunting.

Charlene Sumlin loves her Husband, Team, and City (Link to article via Fantinistazone.com)

"We live in College Station where Kevin coaches at Texas A&M University…WHOOP!  I have the "bloom where you are planted" philosophy, so I have a fondness for everywhere we have lived…BUT I have made no secret of how much I love this place.  College Station is a wonderful place to raise a family and I am grateful to be here." (Charlene Sumlin)

With the finest Aggie women and ready to head to Oxford and #BTHOolemiss pic.twitter.com/NvjZsO9Lto

With President R. Bowen Loftin before the Ole Miss game. (second from left)

She loves Texas A&M and "Gets it…"

"For those who are unfamiliar with Texas A&M, please take the time to visit http://aggietraditions.tamu.edu. I realize each and every school has unique traditions, but the traditions here truly are the fabric that makes this place so amazing….Understanding these traditions makes everyone feel a real connection with this University that goes beyond football.  Because so many of our families were unfamiliar with Texas A&M, we held our own "Fish Camp for Football Families" this year….so when the Yell Leaders were passing back a Yell at the first game, we didn’t miss a beat!" (Charlene Sumlin)

"We have a fun group here at TAMU called "Flab to Fab."  There are usually eight of us wives who meet three times a week and get our behinds kicked by a mean man we call "Heavy T."  I was going to take a picture of the group to share, but we have voted to ban all cameras from the torture sessions." (Charlene Sumlin)

"We also have a Coaches Wives Bible Study that meets once a week for coaches wives of ALL sports here at TAMU.  The FCA puts this on for us and it is a really neat way to connect with each other in an environment that it safe, warm and understanding.  So many opportunities for us to be lifted up by one another…I love that." (Charlene Sumlin)

So blessed to be surrounded by the best coaches wives in the country! We love our team! Gig Em! pic.twitter.com/HVlm0O1Ov7

Getting together with friends, Mrs. Sumlin is on the front row, third from left.

"I tell myself, if I do MY job he CAN do his.  I feel proud he doesn’t have to give a second thought to things getting taken care of at home.  It’s not always easy, but I wouldn’t trade it for anything." (Charlene Sumlin)

After getting the privilege to internet stalk Mrs. Sumlin and learn more about her love for TAMU, Football, Family, and College Station - I have decided that if for some apocalyptic reason Kevin leaves, I sure hope his wife stays.  The article may be a year old, but it was needed now more than ever.  Thanks and Gig'em Mrs. Sumlin!