The tale of Roy Simms; the man who haunts the Texas A&M Animal Industries Building.

Saturday, November 14, 1959. It was a day like any other on the campus of the Agricultural and Mechanical College of Texas. The Corps of Cadets was enjoying their weekend, the Aggie football team was preparing to play Rice in an eventual 7-2 loss, and Meat Locker Room Foreman, Roy Lee Simms was going about his daily routine of preparing meat in the animal laboratory located in the basement of the Animal Industries Building (ANIN).

Roy Simms first joined the Texas A&MC staff in 1938 as a worker in the campus dining hall. He left the college to serve his country in World War II as a member of the United States Navy and returned after his service in 1946. By 1948 he was promoted to Meat Locker Room Foreman; the position he held until his sudden and tragic death in 1959.

At 8:10 am Simms was cutting a slab of bacon by hand as his assistant, Zellie Newton stepped outside to check the weather report on his car radio. Cutting toward himself, Simms' knife slipped and sliced across his left leg near the groin, severing his femoral artery. Newton attempted to call for an ambulance, but Roy Simms was declared dead by 8:15 am, before medical assistance could arrive. 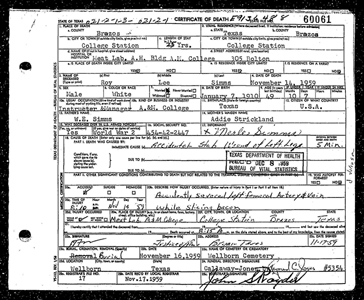 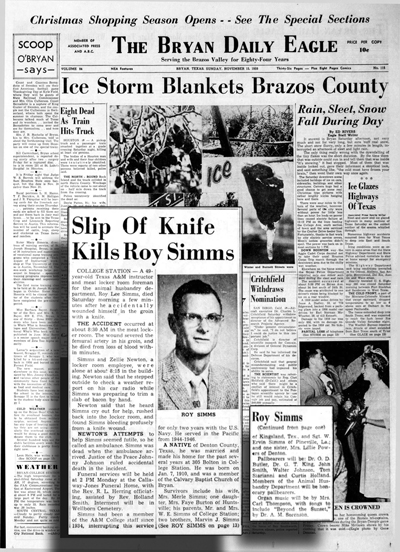 It is claimed that in his desperation, Simms crawled toward the freight elevator to lift himself to safety, dying inside before escaping.

From there the ghost stories began.

Custodians and students have grown the myth over the years, as they stay late in the ANIN, witnessing unexplainable things. It is regularly reported that screaming voices can be heard in the hallways, footsteps and slamming doors where no one is seen, even strange objects moving along the wall near the freight elevator where Simms bled out.

Some janitors have requested reassignment out of fear and others have embraced the Spirit of Roy Simms as reported in The Battalion in 1983.

When the elevator was left up, the next morning containers would be found uncapped and in disarray. - Dr. Gary Smith

Dr. Gary Smith was approached by custodian, Henry Turner, for leaving the elevator on the top floor. At Henry's request, Smith agreed to leave the elevator open in the basement so the ghost of Simms could sleep there at night. If he did not have a place to sleep he would go rummaging around the meat lab disturbing equipment and tools. It is still commonplace to this day for the cleaning crew to leave Simms' elevator open in the basement.

Roy Lee Simms was a well-respected member of the Agricultural and Mechanical College of Texas' staff according to the Resolution issued by the Board of Directors. 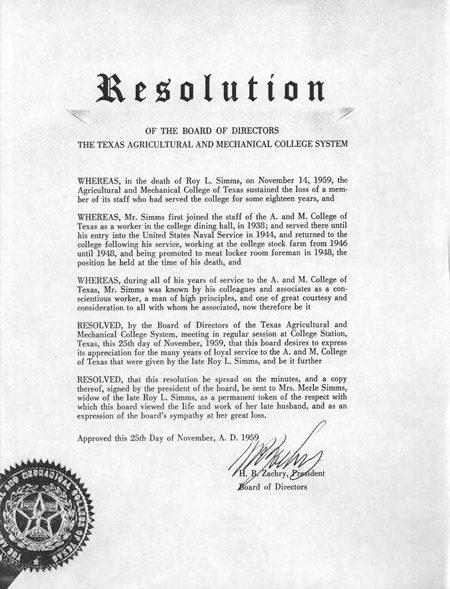 His body was laid to rest in Wellborn Cemetery on November 16, 1959, but his Spirit may live on in the Animal Industries Building forever. 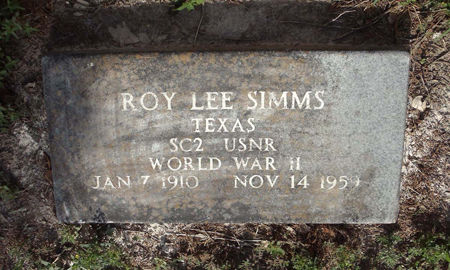 If you are feeling brave, the room of the tragic accident is now a men's restroom as described in The Battalion in 2011.

Located on the basement level is the men's restroom, which serves as an entrance to the building's fire escape. It is aligned with rusty steel hooks that were used to hang cattle by their front hooves before slaughtering. A drain sits in the middle of the whitewashed brick floor, an access point for blood to stream into. - Natalee Blanchat and Joe Terrell

A cold Halloween night might be the perfect time to witness the stories for yourself. But beware: he could have his butcher's knife waiting for you.