As Michael Wacha gets set to start Game 2 of the World Series tonight for the St. Louis Cardinals, we take a look back at his career in Aggieland and how he's gotten to this point.

Share All sharing options for: Michael Wacha's Journey to the World Series

Michael Wacha was born on July 1, 1991. That means he turned 22 less than 4 months ago. Let that sink in for a minute when you consider the kind of success he has had on the biggest of stages for the St. Louis Cardinals. This is a guy who's only been able to legally drink for a little over a year, and he's now won MVP of the National League Championship Series and is set to start tonight's Game 2 of the World Series. Before we talk any more about the present, though, let's take a look back at Wacha's time spent in the Maroon and White.

Would you believe me if I told you that tonight's World Series starter was not a highly recruited high school prospect? In fact, Michael Wacha was not drafted by any MLB team after his senior year at Pleasant Grove High School (Texarkana, TX). He featured a fastball that sat in the mid-to-upper 80's and average offspeed pitches. Although he certainly had the height to be an elite prospect, he also needed to bulk up and add some weight.

After arriving on campus, Wacha made quick strides with the help of A&M coach Rob Childress. Wacha put in the work in the weight room, and Coach Childress worked with him to improve his mechanics and delivery. His fastball velocity improved to the upper 80's to mid 90's by fall, and he started the spring in the bullpen for the Aggies. By just the 12th game of the season, Wacha earned his first career start and he took full advantage of it, earning a midweek win by allowing just 3 hits and no runs in 6 innings against Penn State.

Would you believe me if I told you that tonight's World Series starter was not a highly recruited high school prospect?

Wacha continued to improve during his freshman season, making a handful of starts in Big 12 Conference play and finishing the season with a 9-2 record, 2.90 ERA, 97 strikeouts and 22 walks in a team-high 105 2/3 innings. Wacha was named a freshman All American by Collegiate Baseball and earned honorable mention All Big 12 honors, finishing with the 6th lowest ERA in the conference.

Following that successful freshman season, Wacha found himself in the Saturday starter role to begin his sophomore campaign. As was becoming the trend, Wacha lived up to the moment in his first Saturday start by throwing 6 scoreless innings and allowing just 5 hits with 9 strikeouts in his 2011 debut. In a prime opportunity to impress scouts - the Minute Maid Classic in Houston against Rice - Wacha again delivered a fantastic start, allowing 1 run on 5 hits with 7 strikeouts in 7 innings of work. Although he was outdueled on the night by Rice's Austin Kubitza, Owls' coach Wayne Graham said Wacha's performance was one of the best he's ever seen.

Wacha continued his dominance in Big 12 play yet again, throwing his first career complete game against Oklahoma (9 IP, 7 H, 1 ER, 0 BB, 8 K) and followed that with another complete game in his very next start against Kansas (9 IP, 7 H, I R, 1 BB, 9 K). An injury to A&M's ace and Friday starter John Stilson forced Wacha to shoulder even more of the load for the A&M pitching staff, and he did not disappoint. Wacha was masterful in his Big 12 Tournament start against Kansas State which helped the Aggies move on and eventually win the Tournament. 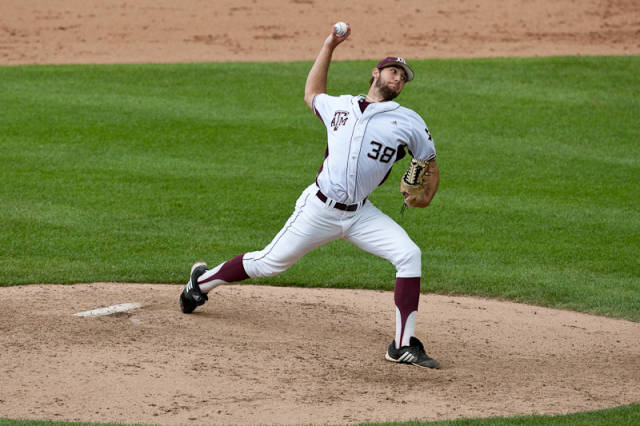 The Aggies' run to the College World Series began at home in the College Station regional, with Wacha getting the start in Game 1 against Wright State and guiding A&M to a comfortable 11-0 win. After another victory against Seton Hall, the Aggies dropped a game against Arizona which set up an elimination game for the right to move on to the Super Regionals. Thanks to some rain, that game got pushed from Sunday to Monday which allowed Coach Childress to go with Wacha on 3 days rest. The sophomore tossed yet another gem, holding the Wildcats to just 5 hits and no runs in 7 innings of work, and the Aggies moved on to face Florida State in the Tallahassee Super Regional. A&M won the first game behind a fine start from Ross Stripling, but elected to hold Wacha back in case of a Game 3 and were subsequently steamrolled 23-9 in Game 2. Faced with another must-win game, Wacha made sure that Coach Childress' decision to save him for Game 3 paid off. The Aggies went on to knock off the Seminoles 11-2 behind 7 1/3 innings of work from Wacha, who allowed just 3 hits and 2 earned runs with 8 strikeouts. For the first time since 1999, Aggie Baseball was headed to Omaha for the College World Series, thanks in large part to the work on the mound from the once unheralded prospect Michael Wacha.

Unfortunately, the Aggies' time in Omaha was brief as they lost the opening game against South Carolina in walkoff fashion and were then eliminated in Wacha's start against Cal. The experience, however, and the preceding postseason run is something that Wacha has drawn from to guide his MLB Postseason success. Zachary Levine penned a great article about just that today, with Wacha crediting his time at A&M for helping to prepare him for everything he's facing now:

"There were some pretty big-time games that I played in there, whether it was super regional elimination games there, elimination games in a regional, College World Series games," Wacha said. "I pitched in those games, and so I feel like getting that sense, getting the atmosphere, getting all those distractions and being able to block them out then, it's helped me now."

Fast Track to the Big Leagues

Following the trip to the College World Series, Wacha had become a player to watch for many MLB scouts and his junior season in 2012 proved exactly why. Wacha finished what would be his final year in Aggieland with a 9-1 record, an ERA of 2.06, and 116 strikeouts plus just 20 walks in 113 innings of work. Leading up to the 2012 MLB Draft, it was virtually a guarantee that Wacha would be a first round pick. Somewhat surprisingly, Wacha was not the first Aggie to hear his name called, as OF Tyler Naquin was selected by the Cleveland Indians with the 15th pick. Four picks later, the St. Louis Cardinals - using the compensation pick they received when Albert Pujols went to the Angels - drafted Michael Wacha with the 19th overall pick.

Wacha earned the right to start the 2013 season in Spring Training with the Cardinals, and Viva El Birdos - the St. Louis SB Nation site - declared him their Spring Training Phenom. That shouldn't come as much of a surprise when you have one of the best catchers in baseball, Yadier Molina, saying something like this:

"I think that guy, right now, can pitch in the big league... That's the way I look at it. He has great stuff. He has a great presence on the mound. He has great command, a great attitude."

Starting the season with the Cardinals' AAA team in Memphis, Wacha continued to impress by going 4-0 with a league-leading ERA of 2.05 in 9 starts. The Cardinals activated him to their Major League roster on May 30 - 364 days after throwing his last pitch for A&M - when he would make his first big league start against the Kansas City Royals. As usual, Wacha lived up to the moment, limiting the Royals to just 2 hits and 1 earned run in 7 innings of work. He was in line for the win until Mitchell Bogs and Victor Marte combined for a nightmare of a 9th inning that allowed the Royals to rally for a win. It wouldn't take long to earn that first Major League win, however, as he defeated the Mets on the road on June 11.

The Cardinals wanted to be cautious with Wacha and limit his work load in case they needed him later in the season, so he spent the majority of the summer in the minor leagues. Wacha was brought back up to St. Louis in August and made a start against the Cubs on August 10, but then was used as a reliever in his next 6 appearances. When September rolled around, though, the Cardinals moved Wacha back into a starter role and he would start 5 games to close out the regular season. The last of those was certainly a memorable one. Wacha took the mound against the Nationals on September 24 and took a no-hitter into the 9th inning before seeing it broken up with 2 outs on a slow rolling grounder that neither he nor SS Pete Kozma could make a play on.

If you didn't know any better, you would think Wacha is back at A&M making another run through the NCAA Regionals and Super Regionals. That's the kind of success that the 22 year-old has enjoyed in his first-ever MLB Postseason appearance. Wacha carried over his dominance from his near no-hitter to end the regular season into his first ever MLB playoff start, which just so happened to come in a must-win Game 4 against the Pittsburgh Pirates on the road. Sound familiar? Game 3 of the Tallahassee Super Regional in 2011, perhaps? Yet again, Wacha stepped up and delivered, and yet again he took a no-hitter late into the game. This time he held the Pirates hitless through 7 1/3 innings before allowing a mammoth HR to former Vanderbilt standout Pedro Alvarez. The Cards' bullpen slammed the door, though, and the Cardinals went home to St. Louis and closed out the Pirates in Game 5.

Going up against the Dodgers in the National League Championship Series, Wacha drew starts against LA's ace Clayton Kershaw (coincidentally an A&M Baseball commit before going pro straight from high school) in Games 2 and 6 of the series. Not only did the youngster go toe-to-toe with one of the best pitchers in the Majors, he actually beat him. TWICE. Wacha led the Cardinals to a 2-0 series lead with 6 2/3 scoreless innings in Game 2, allowing just 5 hits and a walk to go with 8 strikeouts, before coming home to St. Louis with an opportunity to close out the series in Game 6. Another massive situation, and another gem from Wacha - this time 7 scoreless innings with just 2 hits and a walk plus 5 strikeouts. Not surprisingly, Wacha earned NLCS MVP honors for his dominant performances that helped guide the Cardinals to the World Series.

Going back to that last start of the regular season start, here are Wacha's stats in his last 4 starts:

That's incredible stuff when you consider that this is a guy who was pitching in college fewer than 18 months ago. And yet, for those of us who watched him pitch during his time in Aggieland, it really isn't all that surprising. I will never forget making the trip to Malibu, CA during the 2012 season - his last for A&M - and seeing Wacha throw one of the most dominant games I have ever seen in person. Pepperdine absolutely never had a chance against him; Wacha took a no-hitter into the 8th inning before the Waves got a pair of hits, but he kept them off the scoreboard and closed the complete game in the 9th.

Michael Wacha will take the mound for the Cardinals in Game 2 of the World Series tonight in Boston, with the Red Sox jumping out to a 1-0 series lead last night. The Cardinals would love to be able to even the series before heading back to St. Louis for the next 3 games, so it is yet another start in a huge spot for Wacha. If there is one thing that he's proven throughout his career - both in Aggieland and in St. Louis - it's that the bigger the moment, the bigger the performance. There is no stage too big for Michael Wacha.