Mike Evans was unstoppable Saturday, but the Ags suffered their 2nd defeat of the season. How did the Texas A&M offense grade out? Coming off a flawless performance in Oxford against an overmatched Ole Miss pass rush, the Aggie O-line struggled with a very deep, very athletic Auburn front 4. Coach Sumlin describe the OL play as "probably the worst they've played all season" and it's hard to argue.

Although they were clean on 33/42 true dropbacks (not counting screens and swing passes) and were perfect for the first 14 snaps of the decisive 4th quarter, a few individual breakdowns came at critical times and the repercussions were costly.

While the pass protection overall has been outstanding this year, a common theme has been our tackles struggling with the bullrush. Teams learned quickly that a wide pass rush opens the defense up to a Johnny Manziel scramble and have opted to use the bullrush to push our guys back into Johnny. Jake and Ced are not the biggest guys size-wise and have struggled at times handling stronger DEs. Johnny Manziel continues to produce at an amazingly high level, putting up his usual video game numbers (454 yards, 11.3 YPA, 4 TD). But for the 2nd consecutive week, his downfield accuracy dropped. 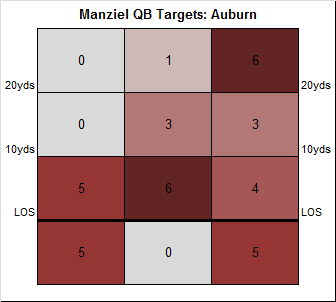 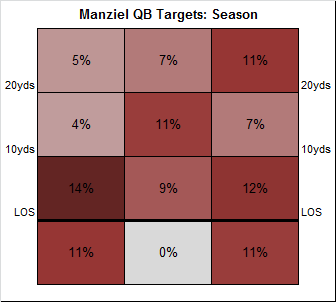 (total: number of dropbacks; DO: dead-on; CA: on-target catchable ball, with screens in paren.; 50: somewhere between catchable and inaccurate, a jumpball or low/behind receiver; IN: inaccurate; TA: thrown away; BP: bad play, with plays that result in interceptions and sacks in paren.; PR: play breaks down due to pressure; BA: batted ball:SCR: scramble: MIX: QB and WR get routes mixed up) This group continues to be outstanding catching the ball. Perfect on all 23 routine catches and 6/10 on 50-50 balls.

As always, any comments or questions are welcomed. And let me know if there is anything you'd like me to touch on in future reviews.