(Austin, TX) Yesterday morning the United States government went into a "controlled shutdown" after the U.S. Senate failed to pass a budgetary measure that would have increased the debt ceiling. The inaction has resulted in the furloughing (an immediate stoppage in work and pay) for over 800,000 public employees that were deemed as "non-essential" to their organization’s ability to operate or achieve success.

The impacted employees were mainly support and custodial positions within the public park system, state and federal landmarks, the EPA, and Mack Brown, head football coach at the University of Texas. All of the aforementioned individuals were notified of their "non-essential personnel" status via e-mail from the Department of Labor at 8:19 AM yesterday morning. Longhorn boosters over the age of 95 were taken aback and infuriated by this "non-essential employee" designation for their head football coach, but other than those four individuals almost all other Longhorns saw it coming. 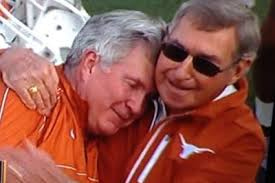 [Above (2007), University of Texas AD, Deloss Dodds (right) consoles a devastated Mack Brown (left) after he finds out that Harry Potter isn't a real person. Some refer to this incident as, "the day Mack lost his Magic".]

At one point, Texas seemed to own the football recruiting front with a fan base that stretched across the nation. Now, UT seems to have a mere sliver of the populous in central Texas that is generating any income or support for the public institution. When UT President Bill Powers was asked about the furloughing of Coach Brown, he said, "The U.S. government is doing what we haven't had the balls to do ourselves over the the last five years." Deloss Dodds, the current UT Athletic Director, who announced yesterday he would be retiring at the end of the year, said, "We at UT have always done so little with so much. We have wasted a vast amount of opportunity at such astounding levels…and that ain't easy to do. Macky Boy making the "non-essential employee" list is further verification of that hard work...a real low that I am proud to ride out on."

Other coaches on the Longhorn staff were oddly enthusiastic about the matter, and coincidentally had attempted to furlough Brown in a team meeting just two weeks before the government shutdown. In another twist of ironic justice, Brown is now in the same boat as his former-Defensive Coordinator Manny Diaz who is currently a garbage man for the U.S. Parks Department and on furlough.

But some Longhorn fans hope this sends a message to their once beloved coach and savior. 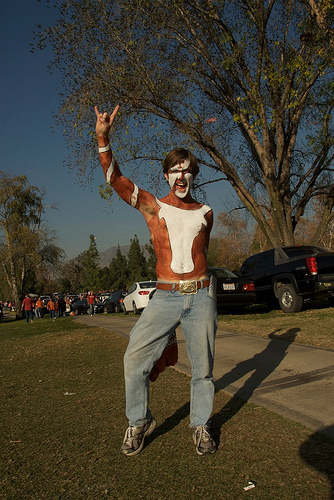 [Bill Rodriguez (above) attended Austin Community College for one semester in 1998 and has been a bonafide Longhorn ever since. He hopes that the furlough is a wake up call for both Brown and the academic institution that he never attended.]

Austin resident and Longhorn fan Bill Rodriguez explained, "As a die hard fan and hardcore ‘horn, I have attended three games in the last 10 years and at every game I am the first one to get there after the game starts and the last to leave in the second quarter. I am personally not going to keep giving it my all for this team unless Mack and his staff of 46 step it up." Others watching from the outside feel the whole event registers as just slightly more embarrassing than when renowned Longhorn (fan) and B-Movie star Matthew McConaughey was arrested in his house for partaking in narcotics and nudity with then Texas running back Ricky Williams - who police found in the corner of McConaughey's bedroom sucking his thumb and playing a bongo drum to Boy George’s "Karma Chameleon."

Probably the most intriguing part of the whole situation is Coach Brown himself. 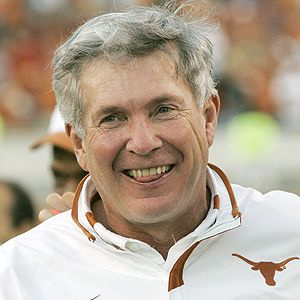 [Mack Brown has worked hard over his tenure at Texas to ensure that both his teeth and the Longhorn defense exemplify the traits of butter.]

In finding out he had been labeled "non-essential personnel" and that he might as well stay home and think about something other than coaching, he replied, "What do you think I have been doing for the last 4 years?" Brown, who recently has only been coming to work on game days for the Capri Sun juice pouches and orange slices that everyone gets afterwards, is thrilled to be officially on furlough. "To be honest with you I have been wanting to spend more time with my family and my dentist and this is the perfect opportunity," Brown said as he smiled his pearly yellows and reached for another orange slice.

About the author - T.B. resides in Dallas, which until a couple of years ago he thought was a mild weathered version of Houston but with crappier people and less strip clubs next to churches. He bought an Ed Hardy t-shirt in 2011 and has felt at home ever since. He aspires to one day own a car that has four matching hubcaps and make a living through hard hitting and insightful journalism from the world of college sports and amateur U.S. Women's Handball.